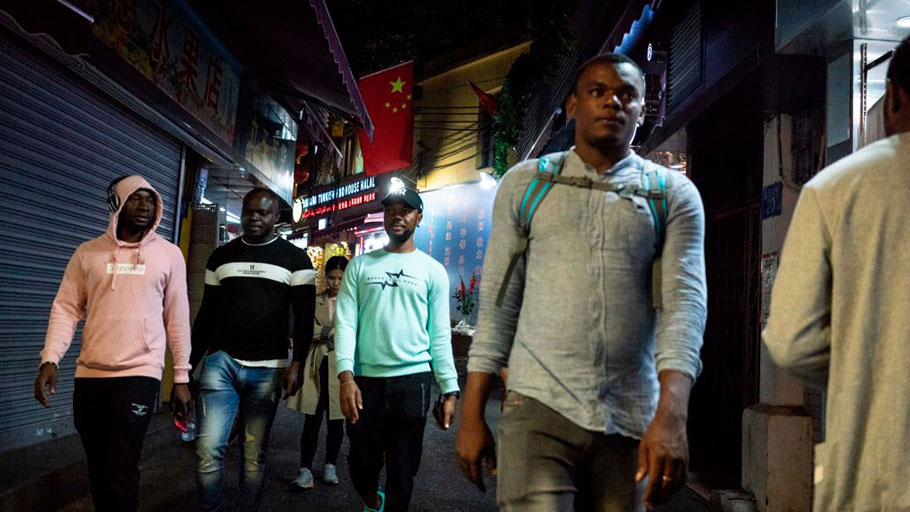 ‘This Is Discrimination.’ Africans in One of China’s Major Cities Say They Are Targets After a Spike in COVID-19

You Are Here: Home » Blog » COVID-19 (Coronavirus) » ‘This Is Discrimination.’ Africans in One of China’s Major Cities Say They Are Targets After a Spike in COVID-19

Jay has been locked in his apartment in the southern Chinese megacity of Guangzhou since April 9—when a doctor, local official and a translator delivered a mandatory quarantine order due to the COVID-19 pandemic. The order came despite the fact that he hasn’t traveled in three months, is showing no symptoms of the disease and hasn’t come into contact with anyone who has tested positive.

The English teacher, who comes from South Africa, checks his temperature every day and sends the readings to his landlord. A camera installed in the hallway of his building points straight at his door to make sure he doesn’t leave.

“When I asked my landlord why me specifically, she said, ‘That’s what the government wanted. All Africans must be isolated at home,’” says Jay, who asked to go by a pseudonym because of fears he could be deported.

It’s just one way that Jay and other African immigrants say they have been discriminated against by local authorities after a spike in imported COVID-19 cases in Guangzhou. Six Africans in Guangzhou who spoke to TIME say they were placed under quarantine, despite no recent travel history or other risk factors. Some had magnetic strips and alarms installed on their doors to deter them from leaving.

Ms. A., a Ugandan woman who asked to be identified only by an initial for fear of reprisals at her workplace, says she and her four Ugandan roommates were taken to a hotel to quarantine, where they were charged almost $500 each.

“The quarantine is OK if they’re doing the right thing,” she says. “But this is discrimination.”

Widely shared videos online appear to show Africans being barred from entering some supermarkets and restaurants. In one video filmed at a McDonald’s, a worker holds a sign that states black people cannot enter. (The company later apologized).’

The U.S. State Department has weighed in, as well, issuing an alert Saturday advising African-Americans to avoid travel to Guangzhou over concern they could be targeted for quarantine by local officials. According to the statement, some local businesses had refused service to African-Americans.

The rise in reported discrimination comes after China’s own condemnation of racist attacks on ethnically Chinese people around the world as the coronavirus has spread. It also follows Beijing’s attempts to stave off a second wave of infections after beating back the original outbreak, even reopening Wuhan, the city where the outbreak was first reported, on April 8. The majority of officially reported cases in China are now imported, mostly from Chinese nationals returning home after all foreign nationals were banned from entry in late March.

Guangzhou, a commercial and manufacturing hub of 13 million formerly known as Canton during colonial times, is home to one of Asia’s largest populations of Africans—many of them traders involved in buying cheap electronics and clothing to sell back home. At least 15,000 nationals from Africa live in the city, according to official figures. But researchers say thousands more are believed to be there illegally.

Racial tensions have occasionally flared in the city, though Guangzhou’s African community is generally well-assimilated. However, many Africans say they are facing a surge of hostility and following rumors on social media that they were spreading the coronavirus.

Gordon Mathews, an anthropology professor at Chinese University of Hong Kong who has spent time with African communities in Guangzhou, says Africans in the city face discrimination on a day-to-day basis.

He says he has found that even those who have lived in Guangzhou for years have little attachment to the city. “They very rarely see Guangzhou as a second home,” Mathews says. “As I’m told, it’s a good place to make a living, but not to make a life.”

The reports of tightened surveillance of Africans seemed to begin after a news story about a Nigerian man allegedly biting a nurse who tried to stop him from leaving a local hospital. The story was widely shared on the Chinese social media site Weibo and drew a slew of xenophobic comments, including that “Guangzhou has been colonized by Africans.”

Local health officials said Monday that 4,500 Africans were tested for coronavirus since April 4, and 111 were confirmed positive. As of Wednesday, there were 494 confirmed cases of coronavirus in Guangzhou, according to the Guangdong Health Commission.

Guangzhou Mayor Wen Guohui said in a press conference on Sunday that “foreigners will not be discriminated against in the fight against COVID-19.”Some local residents are leading efforts to support the African community.

In a private group on WeChat, a Chinese messaging app, some 250 members translate official documents and news reports to help African residents. They also coordinate food donations and deliver them, and have collected a list of hotels that will accept Africans.

And on the Twitter-like microblogging platform Weibo, some have left comments defending Africans and condemning racist behavior. “Discrimination is a display of stupidity and ignorance,” one said.

Another comment read: “China absolutely has a group of people with a serious problem of discrimination. [I] feel embarrassed.”

The reports coming out of Guangzhou are causing diplomatic problems for China. Nigeria, Uganda and Ghana are among the countries that have summoned their Chinese ambassadors to protest the reported discrimination. The African Union Commission, which represents 55 member states, has expressed “extreme concern at allegations of maltreatment of Africans” in Guangzhou.

The Chinese Ministry of Foreign Affairs said on Monday that authorities in Guangdong would be “improving measures” and will “gradually lift health management [restrictions] over African nationals.” The ministry added that the measures were based on “a principle of no discrimination.”

Some Africans say the renewed racial tensions have made them realize that living in Guangzhou may no longer be tenable, even after this coronavirus spike passes.

“I don’t think people are going to start liking you and being friendly with you as soon as the quarantine is done,” Jay says. He acknowledges that there’s always been an air of discrimination, but now “things have changed.”

He is due to renew his teaching contract at the end of the year, but says that he’s already planning not to. “I’ve seen how wildly the xenophobia has sort of pushed across Guangzhou,” he says.

But not everyone can pack up and go—many are reliant on the opportunities in Guangzhou to sustain their families back home.

Tanzo, who asked to go by her nickname, comes to Guangzhou three times a year. The 37-year-old trader from Uganda spends a month or two in the city each time, buying children’s shoes to send back home.

Tanzo traveled to Guangzhou in late February, and went to a 7-Eleven near her hotel shortly after she arrived. When she reached to open the door, two workers inside waved their hands and shook their heads. One ran to the door and locked it. Tanzo got the message and stepped back—the workers then unlocked it and sprayed down the door, the door handle, and the area where Tanzo had stood.

Other stores she tried also told her she was not allowed to go inside. She went back to her hotel empty-handed. Stunned, she called her Ugandan friend who lives in the city.

“I asked her, ‘What’s happening in Guangzhou? They’re treating me like I’m the one who brought the illness!” Tanzo said. “My friend told me, ‘That’s how they do us now.’”