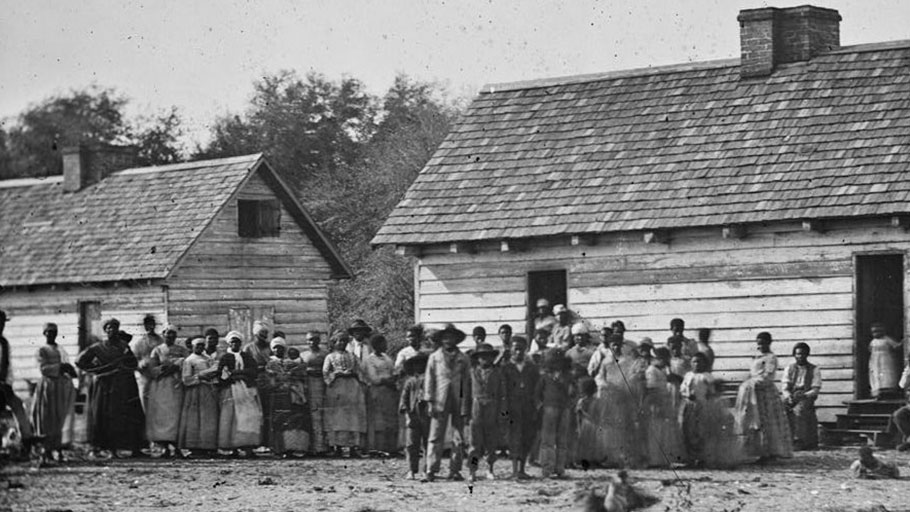 ‘A White Man Took Her’: Trauma, Loss, and Grief among the Enslaved

You Are Here: Home » Blog » Reparations » ‘A White Man Took Her’: Trauma, Loss, and Grief among the Enslaved

In November 1864, a formerly enslaved man named Peter Bumper and his fiance Bucinda Nelson had their marriage registered with the federal government. Long denied access to a legally-recognized, protected union, Bumper and Nelson pursued a path to freedom taken by many formerly enslaved people during the Civil War era. Their heroism in escaping Confederate-controlled territory and finding a Union minister is compelling enough, but the brief information provided on their marriage certificate reveals the trauma such couples endured before they sealed their commitments through legal matrimony. To prevent the spread of bigamy, governing officials required formerly enslaved registrants to disclose information about their previous relationships, usually phrased in two parts: “lived with another woman/man ___________;” and “separated from him/her by ___________.”1 In many respects, this requirement was a naïve maneuver by Union officials, in that they were forcing people to revisit the trauma of slavery, in which their spouses, children, friends, and relatives were taken from them at the slaveowner’s whim. As they considered their answers, one can imagine they relived these moments of violent separation and they were reminded of the precarities of being Black in America, whether enslaved or free.

Most registrants preferred brevity, answering with a single word for how they were separated: “force,” “sale,” “Master,” or “death” are among the most popular descriptions. Nelson was one of the registrants never previously married, allowing her to skip the question by placing a “—” through the question. Bumper, however, crammed five words into the space, and his statement even spilled into the certificate’s predetermined typeset questions. “A white man took her,” he wrote, with a specificity not commonly found in these short certificates. His decision reflects one of the realities African Americans confronted as they transitioned from enslavement to freedom toward the close of the Civil War. Liberty brought unprecedented opportunities for those once defined as chattel, but the requirements of citizenship now necessitated that they relived the traumas of their past. In this regard, Bumper’s decision reveals how he wanted his trauma to be remembered as he pointed the finger toward a system predicated upon the exploitation of his own body, and that of his former wife. “A white man took her” was more than a simple explanation; it was a method through which he assured that the record accurately revealed the violence of white supremacy, while simultaneously manifesting the grief and pain he was forced to confront each time he was asked about his past. At 44 years old, Bumper had experienced a lifetime of abuse, and while freedom certainly tasted sweet, the bitterness of his past required him to constantly grieve. Perceiving an opportunity to record his grief, Bumper ensured that his descendants had a documented record of his trauma, and while he was happy to marry Bucinda, he never forgot, nor was he required to forgive, the injustice done to him.

Though Bumper’s detailed explication was uncommon when compared to the thousands of similar certificates now housed at the National Archives in Washington, D.C., a small percentage of registrants reflect a similar preference for specificity. Lucy Brown noted that “violence” severed her previous relationship. Employing even greater detail, Sarah Brisholl revealed her previous husband was “hung by the rebels,” vividly reflecting how the war violently disrupted enslaved people’s interpersonal lives. Louisa Cox documented that her previous husband was “taken away” after only one year of marriage, while others noted that “white folks” or “white people” were responsible for forcibly severing their previous marriages. These additional details, even the addition of a single adjective or noun, reflect the mechanisms under which people remembered their trauma and used such records as a form of resistance.

For those who recorded their histories through a written memoir or an oral history, their suffering is often described with vivid detail. In 1932, Delia Garlic, a centenarian formerly enslaved in Alabama, divulged the traumatic memories of her life in slavery and even focused her statement directly to the interviewer:

Babies was snatched from dere mother’s breas’ an’ sold to speculators. Chilluns was separated from sisters an’ brothers an’ never saw each other ag’in. Course dey cry; you think dey not cry when dey was sold lak cattle? I could tell you ‘bout it all day, but even den you couldn’t guess de awfulness of it. It’s bad to belong to folks dat own you soul an’ body; dat can tie you up to a tree, wid yo’ face in the tree an’ yo’ arms fastened tight aroun’ it; who take a long curlin’ whip an’ cut de blood ever’ lick. Folks a mile away could hear dem awful whippings. Dey wuz a terrible part of livin…

Garlic’s description is raw and emotional. It is an intense reflection on the violence of her antebellum years. Unlike the plantation myths that portrayed slavery as a benign institution, her testimony asserts that enslavement only produced misery.

Embedded within her overt descriptions of antebellum violence are the coping mechanisms undertaken within her community. Later in her narrative she notes a sense of satisfaction when her enslaver’s sons went to war: “Massa an’ missis cried, but it made us glad to see dem cry, dey made us cry so much.” By invoking plural forms such as “they” and “we” when discussing moments of emotional reaction, Garlic noted that grief and mourning were expressed communally. By mentioning their collective act of crying, she contested racist theories surrounding Black people’s incapacity for emotional attachments. Though Garlic does not specify if they undertook a formulated set of mourning rituals, she does explicate how grief and sorrow were expressed within her community. By publicly noting their communal act of mourning, she both reveals how enslaved people remembered those they lost, while simultaneously holding the perpetrators of such violence accountable.

Garlic’s inference that her community cried “so much” suggests that their expressions of grief were not encapsulated in a single event. The lingering impact of loss weighed upon its victims, and many never escaped their sorrow. In his reflections on an enslaved woman named Eliza, Solomon Northup explored the trauma of child separations that defined much of Black life in the antebellum period. First meeting her in a “slave pen” in Washington, D.C., Northup noted Eliza’s deep connection to her children. Recognizing the inevitable separation they faced, he notes Eliza was inconsolable in her mourning. Northup’s memoir followed Eliza’s sorrowful biography up to her death, often referencing her states of mourning in various chapters. When she was parted from her daughter Emily, Northup exclaimed: “never have I seen such an exhibition of intense, unmeasured, and unbounded grief.” Long after this separation, he reveals that her children were never “absent from her memory,” and though they were apart, she often spoke to them “as if they were actually present.” Tellingly, it was during such illusions that she seemed to obtain a “moment’s comfort.” But Eliza never truly stabilized. Each time they reconnected, Northup noted she looked progressively less healthy, reflecting only “a thin shadow of her former self.” Memories of her children followed her to each plantation, and she mourned them until her violent death at the hands of a cruel master. Northup’s notations on Eliza are important for understanding how post-traumatic stress impacted those who faced these familial separations. And by highlighting Eliza’s inconsolable grief, he not only explored the perversions of chattel slavery, but he demanded that his largely white readership confront the depravities of antebellum slavery through Eliza’s travails.

Unlike physical death, forced separations brought the pain of uncertainty. Though the physical death of a loved one was agonizing, the spiritual passage was often viewed as a release from the travails of the terrestrial realm. At the very least, mourners could engage rituals of grieving when they were available. Forced separations, however, provided no closure, no sense of completion. Perhaps this is why Peter Bumper could only say, “a white man took her,” when asked about his previous marriage. Maybe he wanted to say more, but he couldn’t. He didn’t know where she was taken, or if she was alive. He, like so many enslaved people, only knew “a white man took her,” and he was forced to live with that memory throughout his life.

In leaving a record of their trauma, the formerly enslaved invite their readers to approach the emotional histories of those trapped in antebellum slavery. Though it is tempting to view the enslaved as a stoic group who suppressed their pain for psychological survival, their records remind us that they were not afraid to display their grief openly. Such expressions provide a novel way to understand the people who were violated by chattel bondage, and how their responses reflect the different ways they coped with the losses and separations that constantly loomed over them.

This article was originally published by AAIHS.

Tyler Parry is an Assistant Professor in African American and African Diaspora Studies at University of Nevada, Las Vegas. He studies slavery, the African Diaspora, and the Atlantic world.