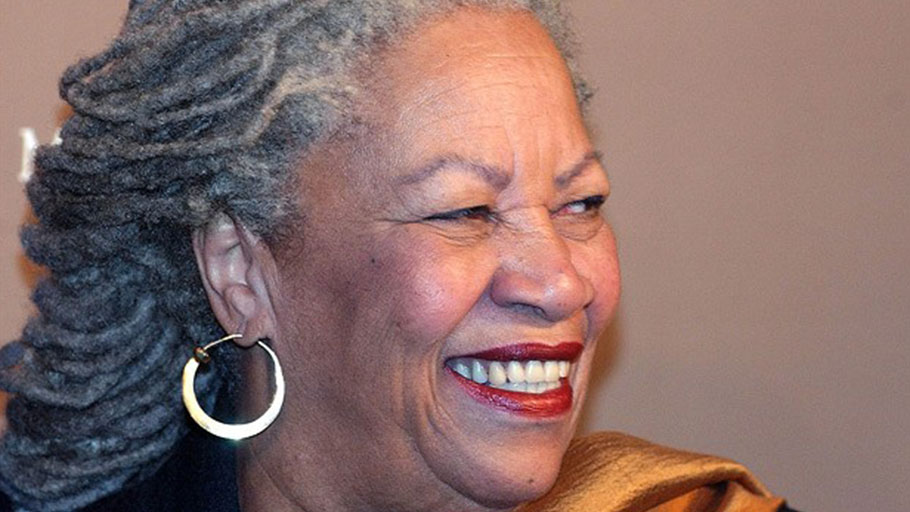 Morrison not only did language, she gave it her own special embellishments, an eloquence that elevated the human condition as she probed the pain and denial experienced by Black Americans.  The measure of her life is in some way denoted by the number of books and awards she amassed. Morrison, following a short illness, died Monday at a hospital in New York City.  She was 88.

Born Chloe Ardella Wofford in Lorain, Ohio on February 18, 1931, her early years were visited by trauma and despair as she witnessed her home being burned down when she was about two.  Only a strong family, invested with resilience kept them afloat and determined to make something of their lives.

It was her parents, too, who instilled a love of literature, oral history and folktales that Morrison would later mine in her novels and other publications. She often cited that Jane Austen and Leo Tolstoy were among her favorite authors as she came of age.  At the age of 12, she became a Catholic and took the baptismal name after St. Anthony, from which her nickname Toni was derived.

As a student at Lorain High School, Morrison was a top debater and also a member of the drama club. She was 18 when she enrolled at Howard University and graduated in 1953 with a B.A degree in English. Later she earned her Master of Arts degree from Cornell University where her thesis was “Virginia Woolf’s and William Faulkner’s Treatment of the Alienated.” Her teaching experience began at Texas Southern University in Houston. After two years at this college she taught for seven years at Howard University. It was here that she met the Jamaican architect Harold Morrison and they married in 1958.  In 1964, she was pregnant with her second son, Slade, when the couple divorced. (Slade died of pancreatic cancer in 2010 at 46. Her oldest son, Harold, Jr. is an architect.)  The end of her marriage was the beginning of literary journey in publishing as an editor for the textbook division of Random House in Syracuse, N.Y.  Two years later, in 1967, still at Random House, she became their first Black woman senior editor in the fiction department. Soon, she was a resourceful conduit in facilitating the flow of such iconic writers as Chinua Achebe, Wole Soyinka, and Henry Dumas. “He was a genius, an absolute genius,” Morrison wrote of Dumas who was killed by the transit cops in New York City in 1968. But numerous others came under her influence and editorial largesse, including Toni Cade Bambara, Angela Davis, Gayle Jones, and the noted South African playwright, Athol Fugard.

Even as she shepherded other authors into the mainstream, she began her own writing career, encouraged by an informal group of poets and writers at Howard University. During these meetings she shared her ideas about a Black girl who wanted blue eyes.  That short story evolved into her first novel The Bluest Eye (1970).  Five years later, her second novel Sula was nominated for the National Book Award, and thus began the recognition that would ultimately earn her international acclaim. Eventually, the accumulation of awards would equal the number of books she published.

She soared onto the best seller list with Song of Solomon (1977) and it was a Book of the Month Club selection, the first to be chosen by an African American author since Richard Wright’s Native Son in 1940.

After the publication of Tar Baby in 1981, Morrison resumed her teaching career with stints at the State University of New York and Rutgers University. In 1984 she was appointed to an Albert Schweitzer chair at the University of Albany, (SUNY).  Two years later her first play Dreaming Emmett, based on the murder of Emmett Till, was performed at the SUNY campus where she was teaching.

And then came Beloved in 1987, and Morrison’s literary ascendance crested. The book was based on a true story about a woman, Margaret Garner, an escaped slave pursued by bounty hunters chose to kill her daughter but was captured before she could kill herself.  She had learned of Garner’s travails while completing her nonfiction collection of miscellany The Black Book. Praise for the book culminated in her receiving the Pulitzer Prize for fiction and several other citations.

In 1998, the book became a film, starring Danny Glover and Oprah Winfrey, who was also one of the producers.  It was less a success on screen, and received only one Academy Award nomination in costume design.

Into the nineties, Morrison continued her prolific production with Jazz in 1992 (the same year a fire destroyed her home and manuscripts), and then she topped off her remarkable mastery of language as a recipient of the Nobel Prize in Literature 1993.  At the core of the acceptance speech for the Prize she spoke of the power of storytelling, and then recounted to the audience a story about an old blind Black woman who asked if there was any context to their lives. She advised the young people to “Make up a story.”

Making up stories was the essence of Morrison’s glorious journey among us and as the writer Ted Wilson said, “We will miss her but we have her books.”  He also insisted that her beloved fans check out the documentary “Toni Morrison: The Pieces I Am,” which was recently screened at the IFC. “It captures her in all her majesty,” Wilson added.