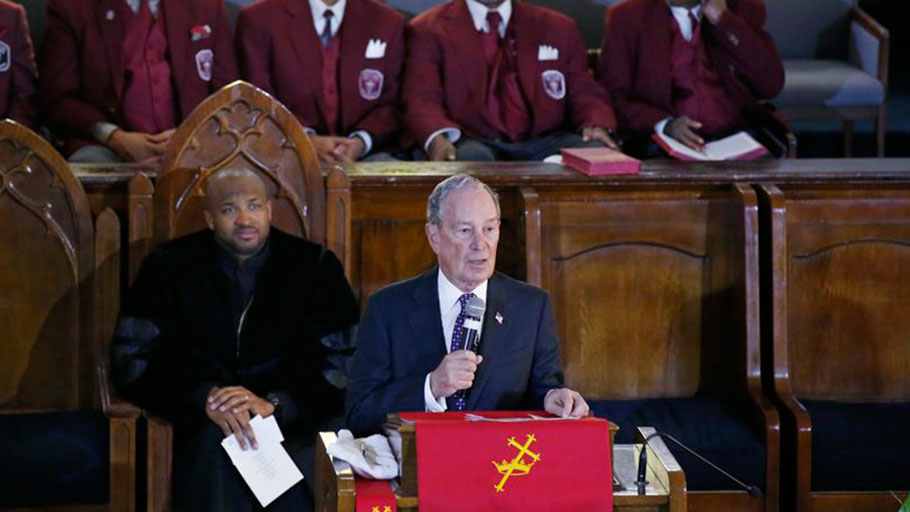 Mike Bloomberg took to the site of historic race riots in Tulsa, Okla., on Martin Luther King Jr. Day weekend to propose sweeping plans to redress the economic legacy of generations of discrimination against African Americans.

In an initiative similar to calls for reparations for slavery, the Democratic presidential candidate proposed $70 billion in investment in the country’s “100 most disadvantaged neighborhoods,” along with steps to create 1 million new black homeowners and 100,000 new black-owned businesses.

Sunday’s speech came as Bloomberg has sought to stem criticism of his handling of “stop-and-frisk,” the police tactic that disproportionately targeted people of color while he was mayor of New York City and an issue that remains one of his biggest liabilities among democratic voters.

“Well, it’s past time to say enough — and to damn well do something about it.”

Bloomberg spoke at the site of the Black Wall Street Massacre, the 1921 riots in which white mobs destroyed a thriving Tulsa business district, killing about 300 people. He began by admitting he’d been ignorant of the incident — exclaiming “How is it possible that high schools and colleges don’t teach this?” — and threaded his speech with mentions of Dr. King and the Supreme Court’s Dred Scott decision in 1857 that argued slaves were not citizens and could not sue for their freedom.

In Bloomberg’s plan, the feds would identify the 100 most disadvantaged neighborhoods in the country, then spend five years “to tackle the neighborhood conditions that perpetuate poverty and exclude the historically disadvantaged from growth and opportunity.” A new Neighborhood Equity and Opportunity Office inside the White House would oversee the program.

Bloomberg promised to utilize the same data-driven approach he brought to New York to tackle the economic effects of discrimination.

“If there is one data point that begins to capture the enormity of the legacy that has been handed down to black Americans, it is this: Today, the typical black family in America owns one-tenth the wealth of the typical white family,” said the billionaire founder of Bloomberg L.P.

He also took a dig at President Trump, noting that his real estate business was sued by the Justice Department for refusing to comply with the Fair Housing Act.

Bloomberg promised to create a $10 billion Housing Fairness Commission to work with local governments and nonprofit groups to test policies “aimed at reversing the effects of discrimination and expanding programs that work.”

On the entrepreneurial front, Bloomberg called for doubling the number of black-owned businesses nationwide from its current level, which he put at 100,000. Proposals toward that end include expanding business incubators, providing “incentives for private investors to focus on underrepresented groups” and increasing federal deposits in black-owned banks.

Bloomberg’s proposals evoked calls for compensation for the descendants of enslaved people who face discrimination to this day. He said he supports a bill from Rep. Sheila Jackson Lee (D-Tex.) to create a commission to study reparations.

The legislation is also supported by leading Democratic presidential candidates including former Vice President Joe Biden, former South Bend, Ind., Mayor Pete Buttigieg and Sens. Bernie Sanders of Vermont and Elizabeth Warren of Massachusetts, though none of them support reparations outright, according to a Politico analysis.

Biden is the front-runner among black voters, 48% of whom named him as their No. 1 choice in a recent Washington Post-Ipsos poll. Just 4% of black voters preferred Bloomberg in that survey, which was conducted Jan. 2-8.

Bloomberg’s November apology for stop-and-frisk drew criticism from New Yorkers, with some accusing the former mayor of saying too little, too late.

He revisited the issue Sunday, saying, “I was wrong not to act faster and sooner to cut the stops, and I’ve apologized to New Yorkers for that.”

But in a Democratic primary in which all the top candidates are white, Bloomberg on Sunday appeared to be trying to make himself the leader on issues of importance to African Americans.

“The crimes against black Americans still echo across the centuries, and no law can wipe that slate clean. Not here in Tulsa, or anywhere else,” Bloomberg said at the end of his speech. “But I believe that this is a country where anything is possible. And I believe that we have the power to build a future where color and capital are no longer related.”

Rev. Al Sharpton said “at best,” the new initiative “expands the conversation, which is good.

“It will challenge other candidates to come up with detailed economic plans for black Americans,” he told The News. “If people want to take a cynical view of his motives, that’s up to them,” Sharpton added.

“If we’re going to close the opportunity gaps for Black Americans, we need a president who offers real accountability and an actionable plan to address these disparities head on,” Canada said in a statement that praised Bloomberg’s “commitment to ending this enduring legacy of discrimination.”

This article was originally published by the Daily News.