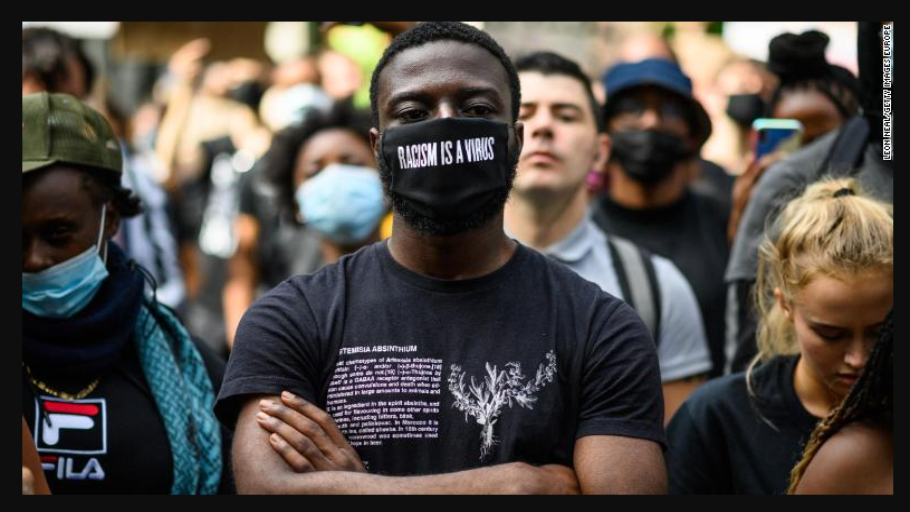 London (CNN)A highly anticipated report from a commission set up by the UK government to look into racial disparities in the country has been described as a “whitewash” by campaigners after it stated that there is no evidence that the UK is institutionally racist.

A short summary of the report, commissioned in the wake of the Black Lives Matter (BLM) protests last summer, was shared to the press ahead of its full release on Wednesday. This said that Britain is not yet a “post-racial” society, but said issues about race and racism are becoming “less important.”

In fact, the UK “should be regarded as a model for other White-majority countries,” the summary added, pointing to shrinking ethnicity pay gaps and success of some ethnic minority groups in education and “to a lesser extent, the economy.”

The report itself, which is 264 pages long, has 24 recommendations, including bridging divides between the police and communities, establishing an office of health disparities, stopping the use of the term BAME (Black and minority ethnic) to help focus on disparities of specific ethnic groups, and advancing fairness in the workplace.

It calls for a new ‘Making of Modern Britain’ resource in response to calls for a more inclusive schooling curriculum, where children will be taught “a new story about the Caribbean experience which speaks to the slave period not only being about profit and suffering but how culturally African people transformed themselves into a re-modeled African/Britain.”

The report attributed poor outcomes for some minority groups, including educational failure and crime, “to family breakdown as one of the main reasons for poor outcomes.”

“Family is also the foundation stone of success for many ethnic minorities,” the Commission’s chairman, Tony Sewell, wrote in the report.

“Another revelation from our dive into the data was just how stuck some groups from the White majority are. As a result, we came to the view that recommendations should, wherever possible, be designed to remove obstacles for everyone, rather than specific groups,” he added.

Campaigners said the report was politicized and failed to adequately address a number of barriers that minority groups face in the UK, from job discrimination, to being disproportionately represented in the criminal justice system, or how minority ethnic frontline workers have died disproportionately during the Covid-19 pandemic.

Even the claim that the UK is a model for “White-majority countries” signals an unwillingness to acknowledge the public reckoning over institutional racism the public have been calling for, say campaigners.

“There’s only three countries in Europe where you can track racism: Finland, Ireland and the UK,” Begum said.

She explains many countries in Europe do not have disaggregated ethnicity data, which means “you actually cannot track racism and for [the commission] to say “we are a beacon” — well the bar is very low.”

“It is a monumental denial of structural racial inequality in the UK, and in fact, they’re denying it even exists, which is frankly appalling,” said Simon Woolley, the founding director of Operation Black Vote, and who chaired the government’s race disparity unit between 2018 and 2020.

A 2019 Oxford University report found that Black Britons and those of South Asian origin — particularly those with Pakistani background — faced as much discrimination in the labor market as they did in the late 1960s and 1970s.

Black mothers have worse outcomes during pregnancy or childbirth than any other ethnic group in England. CNN polling last year also found that Black people are twice as likely as White people to say they personally have not been treated with respect by British police, with half (49%) of Black people and a quarter (26%) of White people indicating that experience.

The report summary said that some minorities have continued to be “haunted” by historic cases of racism, which has created “deep mistrust in the system which could prove a barrier to success.”

“This Commission finds that the big challenge of our age is not overt racial prejudice, it is building on and advancing the progress won by the struggles of the past 50 years,” the report notes, adding that it could not “accept the accusatory tone of much of the current rhetoric on race, and the pessimism about what has been and what more can be achieved.”

It goes on to say that rising rates of hate crimes recorded by authorities is “because of improved police recording processes, and a greater awareness of what constitutes a hate crime.”

UK Prime Minister Boris Johnson announced the launch of the Commission on Race and Ethnic disparities last year following anti-racism protests across the country. But it was widely criticized for tasking Downing Street policy chief Munira Mirza to help set up it up. Mirza wrote in a 2017 Spectator article that an “anti-racism lobby” was peddling a “culture of grievance.”

Sewell’s appointment was also met with controversy. Anti-racism groups accused Sewell, who heads an education charity, of minimizing the effects of racism on educational attainment. “What we now see in schools is children undermined by poor parenting, peer-group pressure and an inability to be responsible for their own behaviour. They are not subjects of institutional racism,” Sewell wrote in Prospect magazine in 2010.

Responding to the report, Begum said: “Johnson should look into the eyes of the families of the 64% of nurses and doctors that died in the NHS that were Black or from an ethnic minority and tell them that institutional racism doesn’t exist.”

In the last five years, there have been at least four reviews into structural racism in the UK — which have included around 200 recommendations addressing deaths in custody, the criminal justice system, and the Windrush scandal.