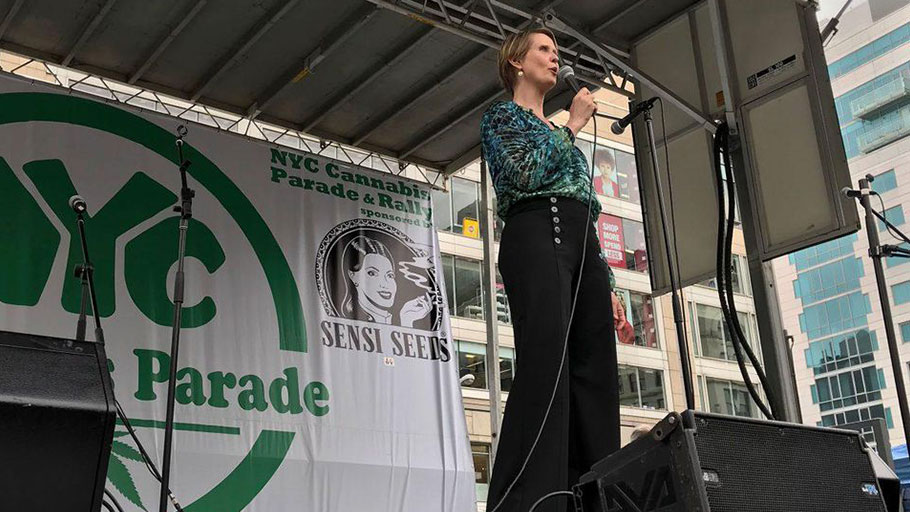 Cannabis Industry Could Be ‘A Form of Reparations’ Says Cynthia Nixon

You Are Here: Home » Blog » News & Current Affairs » Cannabis Industry Could Be ‘A Form of Reparations’ Says Cynthia Nixon

“I don’t know whether you heard this or not, but I want to legalize cannabis in New York state,” said Cynthia Nixon on Saturday at the NYC Cannabis Parade.

The crowd cheered for the candidate who is challenging Governor Andrew Cuomo. Nixon made marijuana a central part of her campaign when she announced adult-use legalization as her first policy plank in early April. On Saturday, she was one of four New York governor hopefuls who showed support for the issue at Union Square Park. Their presence cut a sharp contrast to Cuomo, who has yet to endorse recreational legalization.

“Arresting people–particularly people of color–for cannabis is the crown jewel in the racist war on drugs and we must pluck it down,” she said. “We must expunge people’s records; we must get people out of prison.”

As she walked off the stage, a crowd of people moved in to get Nixon’s attention. One man tried to give her a giant, multi-colored bong. (She demurred.) A woman–joint in mouth–attempted to get a selfie with her mid-puff. Her campaign staff tried to manage the crush of cameras surrounding her.

In an interview after her speech, Nixon explained that she has made cannabis a central part of her campaign because it touches on so many other issues.

“It’s a racial justice issue because we’re incarcerating people of color in such staggering numbers,” she said.

Recent data from the NYPD revealed that black and brown people were nearly 10 times more likely to be arrested for pot possession last year, despite that white people are just as likely to use marijuana. People of color made up 86% of all marijuana arrests in 2017.

“Now that cannabis is exploding as an industry, we have to make sure that those communities that have been harmed and devastated by marijuana arrests get the first shot at this industry,” she said. “We [must] prioritize them in terms of licenses. It’s a form of reparations.”

Racial equity in the cannabis industry has been a problem in states that have legalized the drug. Colorado banned those with marijuana felonies from working in the newly legal industry in an effort to show the federal government that they were complying with the Cole memo. Attorney General Jeff Sessions may have rescinded the Cole memo in January, but those with a marijuana conviction are still out of luck.

That model of legalization is starting to shift. Oakland, California made history when it launched an equity program aimed at remedying drug-war injustices. Instead of banning people with drug convictions from the industry, the city created a program that gave those with pot convictions first dibs on a marijuana business license.

Massachusetts rolled out the first state-wide equity program in the nation last month. Not only do equity applicants get an early start in applying for a license, they also receive help from the state in raising capital and compliance. Meanwhile, New Jersey governor Phil Murphy has focused on racial justice in his support for legalization.

“The use of marijuana has been effectively legal for white people for a really long time,” said Nixon. “It’s time that we legalize it for everybody else.”