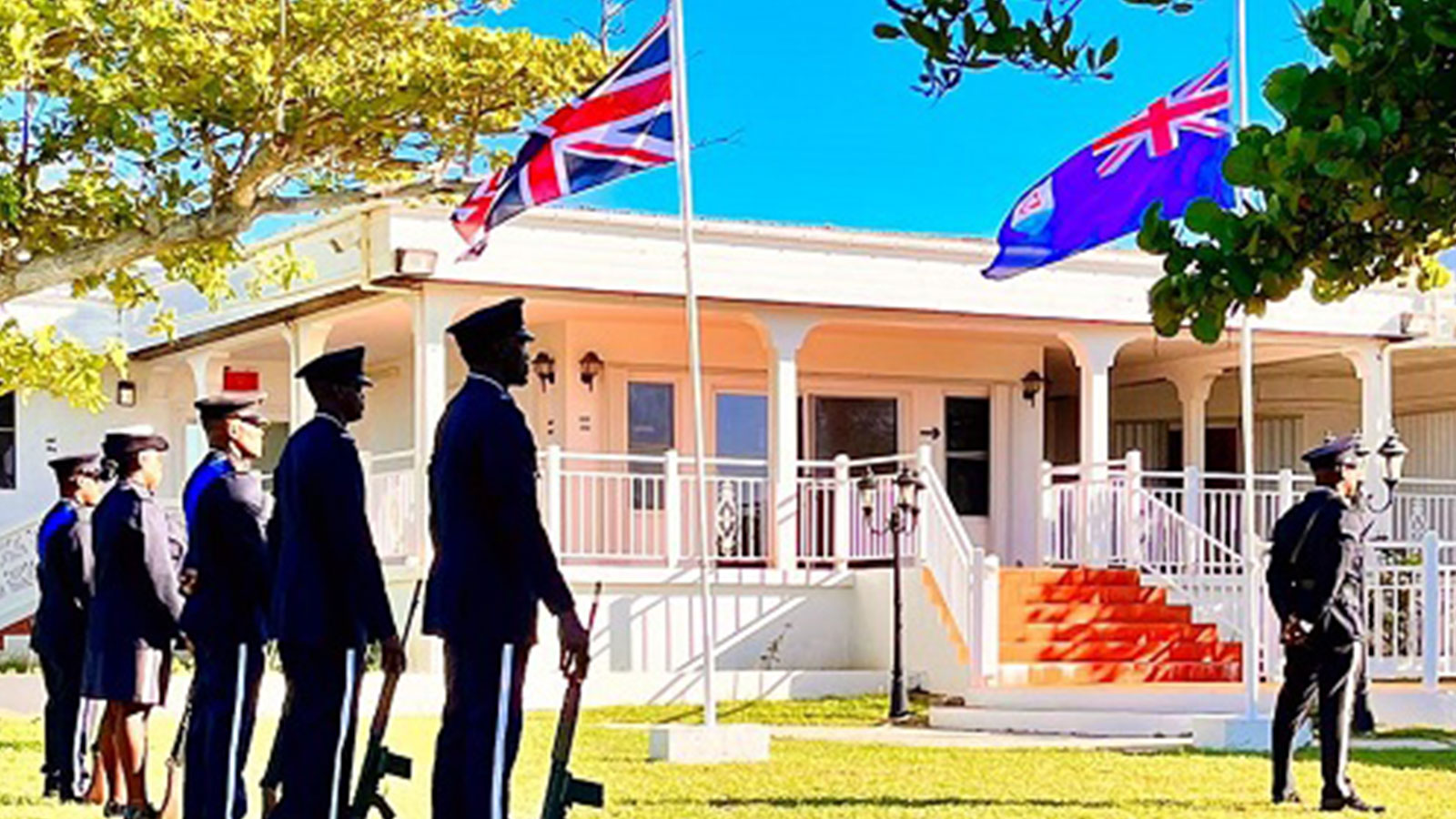 Observances have been planned

The passing of Queen Elizabeth II at Balmoral Castle in Scotland on September 8 continues to reverberate across the world as countries pay tribute and send condolences.

UK Overseas Territories in the Caribbean which include Anguilla, Bermuda, the British Virgin Islands, Cayman Islands, Montserrat and the Turks and Caicos Islands have arranged observances to mark the death of Her Majesty the Queen.

In the British Virgin Islands, the Governor announced that today as a mark of respect to Her Majesty the Queen, a gun salute will be fired at 12 noon on September 9 at Queen Elizabeth II Park. Members of the public have been told that they are welcome at the ceremony, which will start at 11:45 pm. The event will also be live streamed on GIS.

In addition, further details will be issued concerning the funeral, for which the Territory will be invited to observe two minutes of silence in honour of Her Majesty the Queen.

The Union Flag has been half-masted at the Governor’s Office and Government House and will remain at half-mast until the day after the funeral, except during the Proclamation of the new Sovereign, when the flags will be temporarily raised. The BVI Government offices are also lowering flags as a mark of respect. Leading up to the funeral, the Governor has opened a book of condolence at the Old Government House Museum.

The Proclamation of the new Sovereign will be marked in the British Virgin Islands on September 11. There will be a short ceremony at Government House and a further gun salute shortly after 3 pm. The ceremony will be live streamed.

The Turks and Caicos Islands Governor’s Office announced that a 96-gun salute, one round for every year of her age, will be fired in their Capital, Grand Turk, at the Clock Tower on September 9, commencing at midday.

National Flags across the Territory will be flown at half-mast and, with the exception of a period during the proclamation of the new Monarch, will remain at Half Mast until after her funeral.

Condolence Books will be available at the Governor’s Office in both Grand Turk and Providenciales. Those in Government Service have been asked to dress appropriately during this period of mourning.

Nigel John Dakin CMG stated that as Governor, and supported by the Government, Judiciary and Church, he expects to make a Proclamation of the new Monarch, at Waterloo, on Sunday at 11 am. This is to be confirmed dependent on the timing of the Proclamation in London.

A decision as to whether a Holiday will be announced will be made by the Government over the coming days.

Churches may choose to mark the occasion, and the late Queen Elizabeth’s passing, as they wish.

This UK Overseas Territory got off to an early start around 8 this morning with a 96-gun salute in honour of Her Majesty the Queen, at the Little Bay Cricket Ground where members of the public were invited.

The Governor of Montserrat, Sarah Tucker, in a statement said a condolence book is available at the Governor’s Office.

Tucker said as Governor, and supported by the Government, Judiciary and Church, she expects to make a Proclamation of their new Monarch at Salem Cricket Ground on Sunday at 8 am. Residents and visitors are welcome to attend.

In Anguilla there was a 96 Gun Salute at 8 this morning at the grounds of the Governor’s Office in honour of Her Majesty the Queen.

A book of condolence has been opened at the Governor’s Office and is available for the public to sign between the hours of 10 am and 3 pm.

The book of condolence will be made available at each of the Senior Citizens’ residential care homes for any residents who wish to write a personal message of condolence.

A period of mourning will be observed by the Governor’s Office and the Anguilla Public Service concluding the day after the Funeral of Her Majesty the Queen. All public services will continue as usual throughout the mourning period. Members of the public will be able to access information and services as necessary.

National Flags across all Government buildings will be flown at half-mast and, with the exception of a period during the proclamation of the Sovereign, will remain at half-mast until after the funeral of Her Majesty the Queen.

A two-minute silence will be held on the day of the State Funeral Service.

Churches and individual businesses may choose to mark the passing of Her Majesty the Queen as they wish.

H.E the Governor expects to make a Proclamation of their new Sovereign on September 11 on the grounds of the Governor’s Office.

Government House in Bermuda has advised of a 21-rifle salute to mark the passing of Queen Elizabeth II at 12 noon on September 9.

Members of the public have been welcomed to observe the rifle salute at the Government House West Lawn, Middle Terrace.

A Book of Condolence for those who wish to leave messages will be available at Government House between the hours of 2 pm to 4 pm on September 9 and then from 10 am to 4 pm starting on September 12.

In the Cayman Islands, a 96 Gun Salute is taking place as a mark of respect to Her Late Majesty Queen Elizabeth II, at Government House. One round will be fired every 10 seconds with the number of rounds fired to match her age.

For members of the Cayman community in the United Kingdom who wish to extend their sympathies to the Royal Family, a condolence book will be located at the Cayman Islands Government Office in the UK in London from September 12.

Along with the UK and other Overseas Territories, the Cayman Islands has entered a period of 10 days of National Mourning. All flags will be flown at half-mast today until 8 am on the day after the State Funeral. One exception will be during the period of the Proclamation of the new Sovereign – at which time they will be raised as King Charles III assumes the throne.

Floral tributes can be left on the steps of the Government Administration Building and the front gates of Government House.

The day of Her Majesty The Queen’s State funeral will be declared a public holiday.

Featured image: Anguilla: A 96-Gun Salute in honour of Her Majesty the Queen. (Photo via Government of Anguilla)