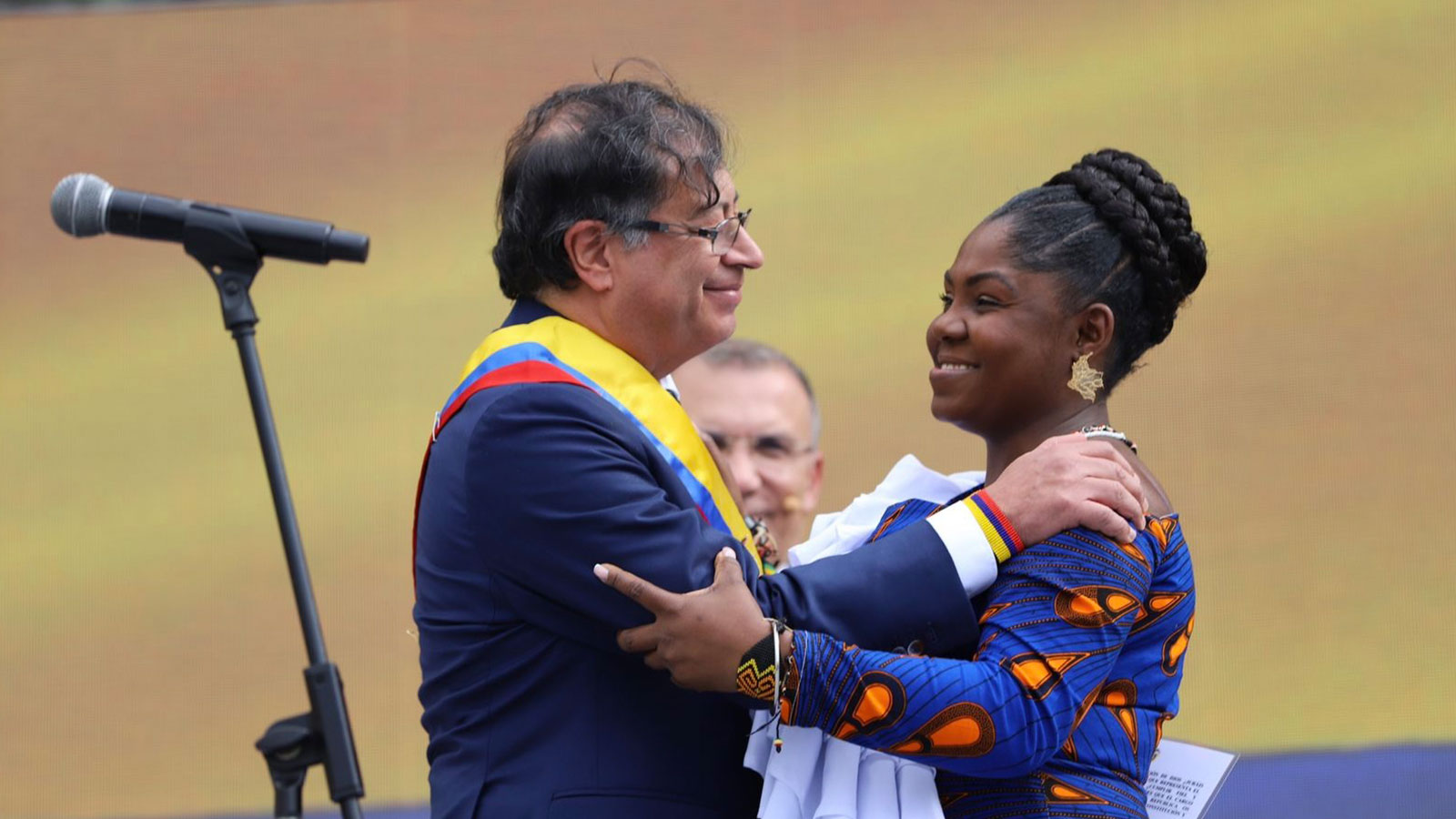 The inauguration of the left-wing leaders, Gustavo Petro and Francia Márquez, marks the beginning of a new era of peace and social justice in Colombia.

Gustavo Petro and Francia Márquez of the Historic Pact coalition were sworn in as the first left-wing president and vice president of Colombia on August 7, the day that marked the 203rd anniversary of the country’s independence from Spain.

Petro and Márquez have vowed to work for true and lasting peace, fight inequalities and protect the most marginalized and excluded in society, protect the environment, defend human rights, develop the national economy and engage in dialogue with all sectors to build a better Colombia. For many, their inauguration marked the beginning of a new era of peace, and social justice in Colombia.

Amid cheering crowds at the Bolívar Plaza, in the capital Bogotá, the president of the Senate, Roy Barreras, swore in Petro. “I swear to God and I promise the people to faithfully comply with the Constitution and the Laws of Colombia,” said Petro.

Following this moment, Barreras called Senator María José Pizarro, daughter of Carlos Pizarro, former presidential candidate who was assassinated in April 1990 and leader of the demobilized left-wing April 19 Movement (M-19) guerilla group of which Petro was a member, to present Petro with the presidential sash.

After taking the oath, Petro swore in Márquez as the vice president of the country. “I swear to God and the people to firmly comply with the Constitution and the Laws of Colombia. I also swear to my ancestors to work until dignity becomes custom,” said Márquez.

While swearing in Márquez, Petro gave his first order as the president and asked the military chief to bring Liberator Simón Bolívar’s sword to the ceremony, which the outgoing President Iván Duque had prevented from being brought to his inauguration. Bolívar’s sword is a symbol of freedom, unity, hope and life for Colombians, as well as Venezuelans, Ecuadorians, Peruvians, and Bolivians.

According to the team of transfer of command, Petro expressed to Duque his wish if Bolívar’s sword could be part of the symbolic acts of the presidential inauguration. The organizers of the event had managed to get all the permits required for its transfer from the Casa de Nariño to the Bolívar Plaza, however, Duque denied its departure citing safety reasons.

A brief break was announced in the ceremony for the sword to reach the Bolívar Plaza. Following its arrival, escorted by soldiers, Petro resumed the ceremony and addressed the people of Colombia.

“To come here with this sword is once in a lifetime opportunity, it is a resistance, I want it to never be buried again (…) It is the people’s sword,” declared Petro.

After greeting the entire nation and the guests, the new head of state added that “I want to tell all Colombian men and women who are listening to me in this Bolívar Plaza, in the surroundings, throughout Colombia and abroad that our second chance begins today. We have earned it. You have earned it.” “Our future is not written. We own the pen and we can write it together, in peace and union,” stressed Petro.

“Peace is possible if we initiate social dialogues in all the regions of Colombia, to find ourselves in the midst of differences, to express ourselves and be heard, to seek through reason, the common paths of coexistence,” he added.

In his first speech as president, Petro also vowed to serve the people and made ten key promises that his government would work towards achieving in the next four years.

He vowed to establish decent pensions, and benefits for disabled people and marginalized sectors. “We will take care of our grandmothers and grandfathers, children, and people with disabilities, people that society has historically marginalized,” he announced.

He pledged to empower women and achieve gender equality and parity in all spheres. “We will work with and for the women of Colombia. Today begins a parity and equality government,” he declared.

The new president promised to continuously consult the people in making and implementing his government policies. “I will dialogue with everyone without exceptions and exclusions. We are going to build a great National Agreement,” he said.

He also vowed to govern with the people. “I will listen to Colombian men and women, one does not govern from a distance, away from the people, one governs by listening. I’ll be close to people’s problems,” he said.

Petro also committed to prioritizing life and putting an end to paramilitarism. “I will defend Colombians from violence and work so that families feel safe and calm,” he stressed.

He pledged to fight corruption and impunity. “We will fight against corruption, we are going to recover what was stolen and watch over so that it doesn’t happen again. No one is excluded from the law,” he emphasized.

He swore to protect the environment and fight against climate change. “I will protect our soil and subsoil, seas and rivers, air and landscapes. I will not allow greed to put biodiversity at risk. We are going to lead the fight for planetary life,” he said.

The president also promised to promote national development in all economic sectors. “I will promote national industry, popular and peasant economy, science and culture. We are going to build a knowledge society,” said Petro.

Lastly he promised to respect human rights and rule by the Constitution. “I will enforce and abide by our constitution,” he said.

Political leaders from around the continent who couldn’t attend Petro’s inauguration sent their best wishes on Twitter.

Cuban President Miguel Díaz-Canel was among the first ones to congratulate the new Colombia president. “I congratulate President Gustavo Petro, who will soon take office, and I wish him success in this new stage that begins after the victory achieved with great popular support. I ratify Cuba’s commitment to peace in Colombia,” tweeted Díaz-Canel.

Cuba was one of the guarantor countries of the peace talks between the Colombian government and the demobilized Revolutionary Armed Forces of Colombia (FARC) guerilla group. The peace agreements were signed in Cuba’s capital Havana in November 2016.

In the past weeks, Petro expressed his willingness to resume the peace dialogue with the National Liberation Army (ELN) in Cuba.

Venezuelan President Nicolás Maduro also felicitated Petro and advocated the restoration of bilateral relations with Colombia. “I extend my hand to President Gustavo Petro and the Colombian people, to rebuild brotherhood on the basis of respect and love. Let’s take advantage of this second opportunity mentioned by the new President of Colombia, for the sake of happiness and peace. Congratulations!,” tweeted Maduro.

Last month, Colombian Foreign Minister Álvaro Leyva visited Venezuela and met with Venezuelan Chancellor Carlos Faria to restore diplomatic relations with the neighboring country, broken in 2019. The ministers signed an agreement that provides for “the appointment of ambassadors in Caracas and Bogotá” and the resumption of relations after Petro’s inauguration.