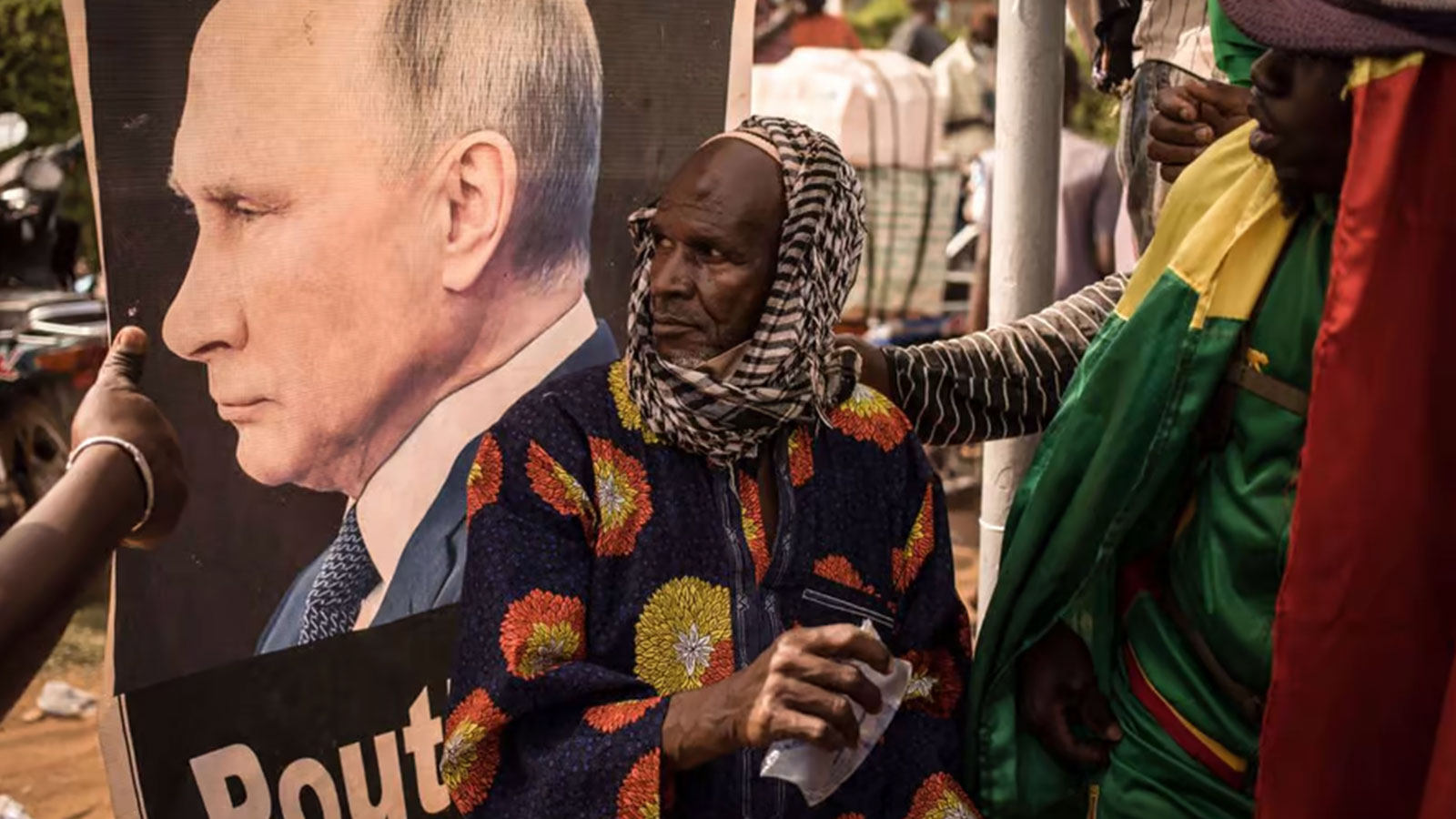 Malian soldiers and Putin-linked mercenaries massacred hundreds of people in the village of Moura.

By Hannah Rae Armstrong, The Nation —

On March 27, as herders converged upon the central Malian village of Moura (population: 10,000) for the weekly Sunday livestock market, helicopters carrying Malian soldiers accompanied by men believed to belong to the Kremlin-linked Wagner Group flew in and started firing. They sealed shut the exits to the village and raked their way through it in a counterterrorism operation that lasted for five days and left between 200 and 400 people dead. Human Rights Watch deemed it “the worst single atrocity reported in Mali’s decade-long armed conflict.” Armed actors have proliferated in Mali since separatist northern militants rebelled in 2011, only to be sidelined by an Al Qaeda affiliate. The Malian army, in a statement describing the same event, claimed to have neutralized 203 terrorists in a manner consistent with international law. Eyewitnesses, however, described indiscriminate killing and targeting based on ethnic appearance or dress.

The massacre occurred two months after President Emmanuel Macron announced the withdrawal of French forces, which have played a crucial role in a convoluted Sahel stabilization mission centered on Mali for nearly a decade. Tensions between France and the ruling junta have risen steadily since 2020: Amid a chorus of cries that French troops were no longer welcome, Malian army officers used years of European military training to seize the state (twice), expel the French ambassador, and contract with Wagner. Since gaining prominence fighting on behalf of the Assad regime in Syria, the Kremlin-linked paramilitary force has expanded its footprint into African countries, propping up client regimes and securing access to extractive resources.

Since France first deployed troops in 2013 to repel the southward advance of Al Qaeda–linked militants, Paris has led a multidimensional intervention in Mali that weaves together counterterrorism, counterinsurgency, and state-building. In recent years, violence against civilians has soared at the hands of Al Qaeda- and Islamic State–backed groups, Malian security forces, and self-defense groups, and the fiction of a possible military victory over terrorists has fallen apart. Meanwhile, the burgeoning Western security and development architecture looked bloated, aimless, and impotent.

Despite tactical victories by French forces, the state just kept losing ground. Jihadists’ numbers and attacks increased as did their theater of operations, which spread into central and southern Mali and seeped across borders into Niger and Burkina Faso.

More worryingly, mass-casualty violence cropped up on the back of counterterrorism efforts. Intercommunal clashes and ethnic violence flared as self-defense groups—sometimes with French support—donned the counterterrorism mantle to target their rivals, often among the Peul ethnic minority, in central Malian sites like Ogossagou and along the Mali-Niger border. As insecurity spread, the inflows of cash deepened corruption and discredited political authority. Despair drove many Malians to support the coups d’état in 2020 and 2021 and the subsequent security partnership with Russia.

The contours of recent Russian engagement are beginning to emerge. Where the French model of crisis leadership fell because of the arrogance of its own ambition, the Russian model embraced by the junta appears narrower and more focused on stifling dissent and targeted counterterrorism operations in central Mali. Encouraged by France, the West African regional bloc ECOWAS and the European Union imposed economic sanctions on the country and targeted sanctions against junta members over a year ago. Punishment pushed the junta toward alternative partners like Russia, as it took an authoritarian turn, harassing and arresting critics and opponents and reportedly slaughtering people in central Mali.

The ruling junta in Bamako took power in August 2020 following months of protests that saw the population rally behind a broad coalition of political, civil society, and religious leaders in decrying the incompetence and corruption of the questionably elected government. In May 2021, Vice President Col. Assimi Goita stripped the civilian president and prime minister of their powers in a coup-within-a-coup that strengthened the military’s grip on power and unraveled some of its popular appeal.

The junta initially appeared keen to jumpstart lagging peace processes with northern rebels and dialogue with jihadists, and to experiment with more inclusive, democratic forms of governance. It rewarded itself for this with a generous five-year timetable for transition to civilian rule.

In response, Paris prodded the West African regional bloc ECOWAS and the European Union to impose sanctions, which are straining a fragile economy during a time of global inflation, and punish a landlocked populace by closing land borders and blocking regional remittances. To many in Mali, sanctions ostensibly aimed to speed up the political transition appear vindictive compared to the light hand-slaps meted out around the same time to military rulers in Chad and Guinea for similar seizures of power.

For years, Russia had sought to expand its influence in Mali, focusing on the capital Bamako, paying activists and influencers, sponsoring pro-Russian protests, and using fake and hacked social media accounts to amplify pro-Russian messaging. Malians have proven increasingly receptive, especially in the capital. After all, many wondered, what had decades of Western-backed democratic rule delivered?

Without securing a tighter electoral timetable, sanctions only further fanned resentment against France and support for the junta. The sense that Malians chose Russia seemed to deepen the French impulse to punish them. And punishment seemed to push the junta further into the Russian camp.

The junta’s embrace of authoritarian shows of force this year suggests it may be drawing inspiration from its new Russian partners. In recent months, it has launched a brutal military campaign in central Mali and cracked down on dissent and civil liberties. With apparent support from Wagner, the Malian armed forces launched counterterrorism offensives across the center of the country. Two weeks before the Moura massacre, Human Rights Watch reported that Malian government forces had killed at least 71 civilians mostly in central Mali since December 2021—nearly twice as many as civilian killings as it linked to Islamist armed groups. A week later, the Malian transitional authorities suspended French radio and television broadcasters RFI and France 24 after they reported allegations that the military and Wagner were killing and torturing civilians.

Meanwhile, prominent opponents and critics are being detained or left to die. The leftist political party leader Oumar Mariko, filmed calling for accountability for the spate of mass murders, is in hiding since government forces broke into his house. On March 24, former prime minister Soumeylou Boubeye Maiga died in detention after officials ignored his family’s pleas regarding his deteriorating health. Maiga, one of Mali’s most esteemed political authorities, was arrested on fraud charges during a purge shortly after the 2021 coup.

As Western capitals’ resources and attention migrate toward the crisis in Ukraine, this authoritarian turn is accelerating. Is more pressure in the form of sanctions and disengagement by the West, whose last hopes to save face at this point are that the junta runs out of money or is toppled by friendlier authorities, or that Wagner shifts its resources to Ukraine, the best way to stop it? Probably not.

But it may be the most likely outcome. The Islamic State committed massacres against civilians on a similar scale in the Menaka region just a week before the killings in Moura. Whereas violence by militant Islamist groups has dominated media and human rights reporting on Mali for the past decade, few outlets published anything on this latter killing, showing how rapidly Ukraine has shifted the Western appetite away from narratives that focus on Islamic extremist perpetrators of violent crimes to ones that feature Russians. For Western actors aware that a decade of stabilization efforts may have had the opposite result, casting Russians as the new lead villain is a convenient way to skulk away from the bog they helped create, even as isolation and punishment further increase the junta’s dependence on Russia.

Meanwhile, on April 10, Russia blocked a UN Security Council request submitted by France for independent investigations into the killings. Closing ranks around its new partner, the Russian foreign ministry called the massacre reports “disinformation” and congratulated Mali on its “important victory” against terrorism.

Source: The Nation
Featured image: An man sits in front of a portrait of Russian President Vladimir Putin during a demonstration to celebrate France’s announcement to withdraw French troops from Mali, in Bamako, on February 19, 2022. (Florent Vergnes / AFP via Getty Images)