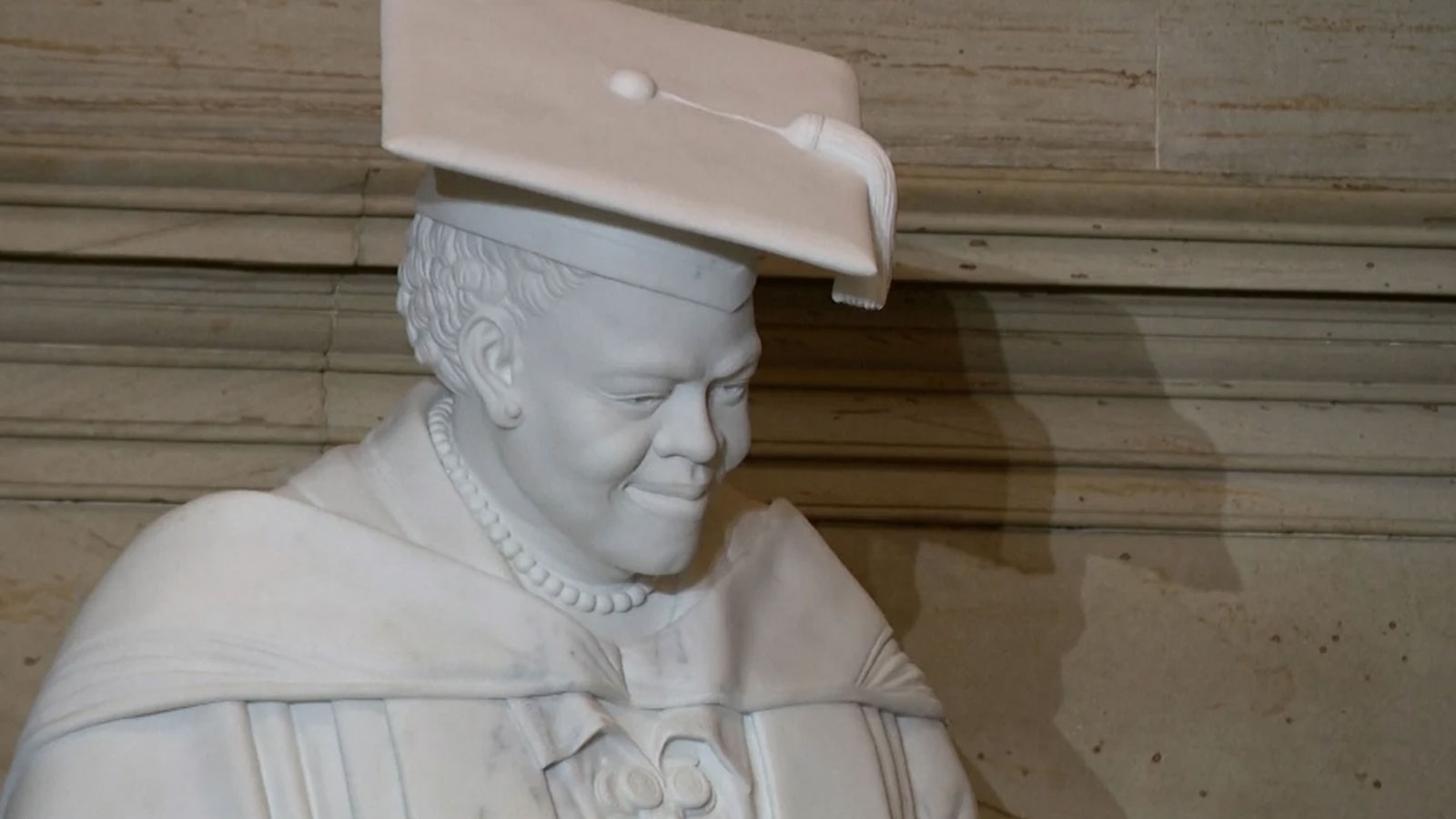 Mary McLeod Bethune is the first Black American to be represented with a state statue in the National Statuary Hall. Her likeness replaces a statue honoring one of the last Confederate generals to surrender.

Mary McLeod Bethune on Wednesday became the first Black American to be represented with a state statue in National Statuary Hall, a central room of the United States Capitol, honored for her work championing education and civil rights.

Bethune, whose statue replaces one of a Confederate general, became an adviser to President Franklin D. Roosevelt and an advocate for Black Americans from the schoolhouse to the White House. The school she founded with $1.50 eventually became Bethune-Cookman University, a historically Black university in Daytona Beach, Fla.

House Speaker Nancy Pelosi, who hosted the dedication ceremony, called Bethune “the pride of Florida and America,” and said it was “poetic” for her likeness to replace that of “a little-known Confederate general,” Edmund Kirby Smith, who was among the last to surrender after the end of the Civil War in 1865.

His statue was removed in 2021. Ms. Pelosi called it “trading a traitor for a civil rights hero.”

The House voted last year to remove statues honoring Confederate leaders and other white supremacists from display at the Capitol. That bill and others like it come amid a yearslong debate over the replacement of statues as well as names on buildings, streets and universities that memorialize racist figures. Critics say it is better to celebrate figures who contributed to the struggle for equal rights.

There are many signs of Bethune’s legacy at the university she led for 30 years, said Lawrence M. Drake II, the interim president of Bethune-Cookman University. She practiced experiential teaching as an educator, a philosophy that pairs activities with lesson material, he said.

“Our hearts are rejoicing today seeing our founder and namesake take her rightful place among the most distinguished Americans,” he said.

The statue, carved in white marble from the same quarry as Michelangelo’s David, depicts Bethune in graduation regalia and a cap with books. She is holding a black rose, which she once described as a symbol of acceptance of students’ individuality. In her other hand, she holds a cane that was given to her by Roosevelt.

The inscription is one of her best-known quotes: “Invest in the human soul. Who knows, it may be a diamond in the rough.”

The artist, Nilda Comas, is based in Fort Lauderdale, Fla., and is the first Hispanic sculptor to create a piece for the National Statuary Hall. Each state sends two statues of prominent citizens to represent it in Statuary Hall, an ornate, amphitheater-style room just off the House floor, or elsewhere in the Capitol.

“We can’t change history, but we can certainly make it clear that which we honor and that which we do not honor,” Representative Steny H. Hoyer, Democrat of Maryland and the majority leader, said last year. “Symbols of hate and division have no place in the halls of Congress.”

A Senate version of the bill to remove Confederate statues from public display at the Capitol was introduced last year by Senator Cory Booker, Democrat of New Jersey, but it has not advanced.

Statues can be replaced only with the approval of a state Legislature and governor. Senator Rick Scott, a Republican and a former governor of Florida, started the process of commemorating Bethune.

Representative Val Demings, Democrat of Florida, said at the ceremony that her parents taught her about Bethune’s legacy of public service. Ms. Demings, who was given an honorary doctorate from Bethune-Cookman University, said she still looked up to her.

“Her labor of love could not be contained in her years on this earth,” Ms. Demings said. “Her contributions will touch generations yet unborn. She was bold, courageous. And although her journey had its triumphs and its struggles, Dr. Mary Bethune never wavered.”

Born in 1875 in South Carolina, Bethune was a daughter of formerly enslaved people and “became one of the most important Black educators, civil and women’s rights leaders and government officials of the twentieth century,” according to the National Women’s History Museum.

She and her husband, Albertus Bethune, eventually moved with their son to Palatka, in northeastern Florida. After her marriage ended, Bethune opened a boarding school in 1904 with $1.50 and an enrollment of just five students. The school became Bethune-Cookman College by 1931 and, in 2007, Bethune-Cookman University.

She founded organizations that advocated for expanding voter registration and granting women the right to vote, and worked with the N.A.A.C.P. and the United Nations to end discrimination and lynching.

In 1936, Roosevelt named Bethune the point person for Black youth at the National Youth Administration, a New Deal agency focused on employment for young people, making her the highest-ranking Black woman in government. She was also a leader of his unofficial “Black cabinet,” according to the National Women’s History Museum, and formed a friendship with Eleanor Roosevelt.

Bethune worked to make Americans believe that Black lives matter, Representative Frederica S. Wilson, Democrat of Florida, said at the ceremony. As a child who started her life working in the fields, Ms. Wilson said, Bethune realized that an education was the way out — for herself and for those who came after her.

Bethune was the youngest of 17 siblings and the first of them to learn to read.

“Today we are rewriting the history we want to share with our future generations,” Ms. Wilson said. “We are replacing a remnant of hatred and division with a symbol of hope and inspiration.”

Bethune wrote a “last will and testament” essay in 1954, the year before she died, about the legacy she wanted to leave for future generations. Many speakers at the ceremony referenced it.

“If I have a legacy to leave my people, it is my philosophy of living and serving,” she wrote. “As I face tomorrow, I am content, for I think I have spent my life well. I pray now that my philosophy may be helpful to those who share my vision of a world of peace, progress, brotherhood, and love.”

Featured image: A statue of civil rights icon Dr. Mary McLeod Bethune was unveiled in a ceremony in Statuary Hall at the U.S. Capitol, replacing a statue of a Confederate general.