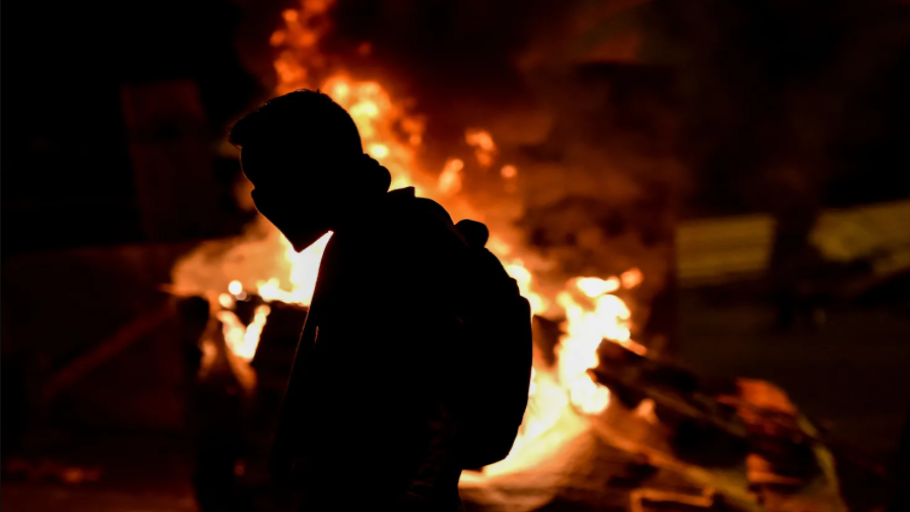 ‘We want the world to see’: Colombia protesters’ demands grow in face of police brutality

You Are Here: Home » Blog » News & Current Affairs » ‘We want the world to see’: Colombia protesters’ demands grow in face of police brutality

BOGOTA, Colombia – Juan Carlos Neiva says he is part of “Primero Linea,” the “First Line,” a group of protesters who actively engage riot police in running street battles. He holds a homemade wooden shield, painted with the phrase “For education, and for the fallen.” His face is covered by a black T-shirt wrapped around his head.

“The Colombian people are yelling and we want the world to see,” he says near Plaza Bolívar, the public square and seat of Colombian government, which has been the site of numerous face-offs between police and protesters in recent days. The acrid smell of tear gas lingers in the air from ongoing skirmishes “This government wants everything from us, but we have nothing, and now they’re using violence to silence us.”

Protests in Colombia have stretched into their third week, as hundreds of thousands have taken to the streets across the country as part of a national strike that began April 28 over a host of social and economic issues, particularly a proposed tax bill that would have raised the cost of food and some consumer goods.

This government wants everything from us, but we have nothing. And now they’re using violence to silence us.

The proposed reform has since been withdrawn, but harsh and even fatal force by police has transformed the movement into one against President Iván Duque’s administration more broadly. The government says 26 have died, but NGOs put the death toll at 47. Temblores, an organization that monitors police violence in Colombia, has documented 1,876 registered cases of police violence.

The violence worries many in the U.S., who fear an eroding of democracy in its Latin American ally could have a destabilizing influence on the entire region.

“Colombia is a close partner and ally whose stability and success is in the national interest of the U.S.,” said Sen. Bob Menendez, the chair of the Senate Foreign Relations Committee. “Above all, the authorities must respect human rights and regulations against the excessive use of force. The freedom to assemble is sacred to democracy and indispensable to accountability.”

In Menendez’s home state of New Jersey, roughly 200 people marched in solidarity with the protesters in Colombia.

“Tax reform is only the tip of the iceberg,” said Milton Zamora, a Colombian in Dover, New Jersey. “Until corruption is no longer part of the equation, no tax is going to solve the economic problems of the country.”

The Colombian diaspora in the United States numbers 1.2 million, according to the nonprofit Pew Research Center.

The United Nations has condemned the violence, and the U.S. State Department said it was “deeply saddened” by the protesters’ deaths:

All over the world, citizens in democratic countries have the unquestionable right to protest peacefully. Violence and vandalism is an abuse of that right. At the same time, we urge the utmost restraint by public forces to prevent additional loss of life. We recognize the Government of Colombia’s commitment to investigate reports of police excesses and address any violations of human rights.

“All over the world, citizens in democratic countries have the unquestionable right to protest peacefully. Violence and vandalism is an abuse of that right.

At the same time, we urge the utmost restraint by public forces to prevent additional loss of life. We recognize the Government of Colombia’s commitment to investigate reports of police excesses and address any violations of human rights.

We continue to support the Colombian government’s efforts to address the current situation through political dialogue.”

While Colombia’s current leading party supported former President Donald Trump and Republicans in Florida, Biden has a long history with the nation as well. As a senator, Biden became one of the masterminds behind Plan Colombia, a $7.5 billion bilateral program focused on fighting drug trafficking in the Americas. As vice president, Biden visited Colombia in 2013 during its peace negotiations; after 50 years of conflict, a deal was reached between the Colombian government and Revolutionary Armed Forces of Colombia (FARC) in 2016. However, some on the left have criticized Plan Colombia for funding the militarization of police in Colombia.

Clashes between Colombian riot police, ESMAD, and protesters have been common in Bogotá.

“We have watched the increasing violence with extreme concern,” said Alajandro Lanz, co-director of Temblores in Bogotá. “Most of the victims we have registered have been young people who were protesting peacefully. There is no guarantee of life for anyone.”

Both Temblores and another NGO, Indepaz, a peace-monitoring group in Colombia, say they have received credible reports of indiscriminate police fire against civilians amidst the chaos.

Parce attended a remembrance ceremony for those who have lost their lives so far in the protests in the Soledad neighborhood, where hundreds of residents with candles and torches read the names of the dead, the crowd clapping and banging pots after each name.

Pain in Colombia has broad meaning. The national strike in Colombia was spurred not only by the tax proposal, but by rising violence amid what critics see as failed promises on the part Duque’s administration regarding the peace deal; rising poverty and inequality; and the killing of 310 social leaders, human rights defenders and activists in 2020 (an additional 57 killed so far in 2021, according to Indepaz).

The controversial tax reform provided momentum to the protests, as COVID-19 has weighed heavily on the economy. Since last year, amid lockdowns and quarantine measures, the poverty rate in Colombia has risen to 42.5%. Bogotá and Cali, a protest hotbed, both suffer from unemployment rates of just over 20%. By comparison, the unemployment rate in the U.S. is 6.1%.

The main point of violence has been the city of Cali, roughly 300 miles west of Bogotá. Indepaz has confirmed 22 deaths in the city, which nightly experiences waves of violence, documented in numerous videos flooding social media.

Celebrities from Viola Davis to Sofia Vergara have also used social media to call attention to the violence. Shakira, a native of Barranquilla, Colombia, shared a series of tweets calling on the governmnet to honor human rights.

“It is unacceptable for a mother to lose her only child to brutality,” the singer wrote. “The bullets will never be able to silence the voice of the one who suffers. And it is essential that we are not deaf to the clamor of our own.”

Residents and protesters have complained of internet outages amid the crackdowns, and blame Colombian authorities. Netblocks, an internet service observatory in the United Kingdom, confirmed localized outages, but it is not clear who is responsible.

Sporadic blockades on major highways throughout the country, especially near Cali and Bogotá, have also led to tension among Colombians.

Though there have been some incidents of looting and vandalism, protests have been mostly peaceful. Colombia’s Ministry of Defense has deployed 1,000 additional soldiers and police to the City of Cali since unrest began.

What will Duque do?

In recent days, Duque has moved away from the hard-line rhetoric of the first week of the protests, when many in his Centro Democratico party called demonstrators “terrorists,” “vandals” and “narcos.”

At a press conference Sunday, Duque called for a national dialogue, saying, “We have to utilize these moments, which have caused us so much pain. We have to convert this moment into an opportunity as a country … we have to build a pact for the youth with the youth.”

He offered plans for increases to education and youth employment, asking that the nation come together to find a solution for the crisis.

“Momentum for now is clearly with the protesters,” said Sergio Guzmán, director of Colombia Risk Analysis, a research and consultancy group in Bogotá. At first, “the administration offered nothing but a rhetoric of fear,” he said. “But outside of their base, they are not finding a receptive audience.”

Duque flew to the city early Monday, immediately holding a press conference in which he called for dialogue. He has also called for more police and military to be deployed to the city.

Neiva, the “First Line” protester in Bogotá, is unlikely to be swayed by the president’s plea for compromise.

“The support for protests is bigger than the government realizes,” he said in Plaza Bolívar. “We have people who show up with water, or juice or Gatorade. They drop it off, telling us they have to get back to work, but they support what we’re doing.”

Protesters’ demands now include police reform, increased social programs for those hit by the economic fallout of COVID lockdowns, and the repeal of a proposed medical bill that would privatize some health care.

Neiva’s demand that Duque resign doesn’t represent all protesters in the streets, but it does illustrate that the distance between civil society and government is large and growing by the day.

Meanwhile, in the streets, violence continues.