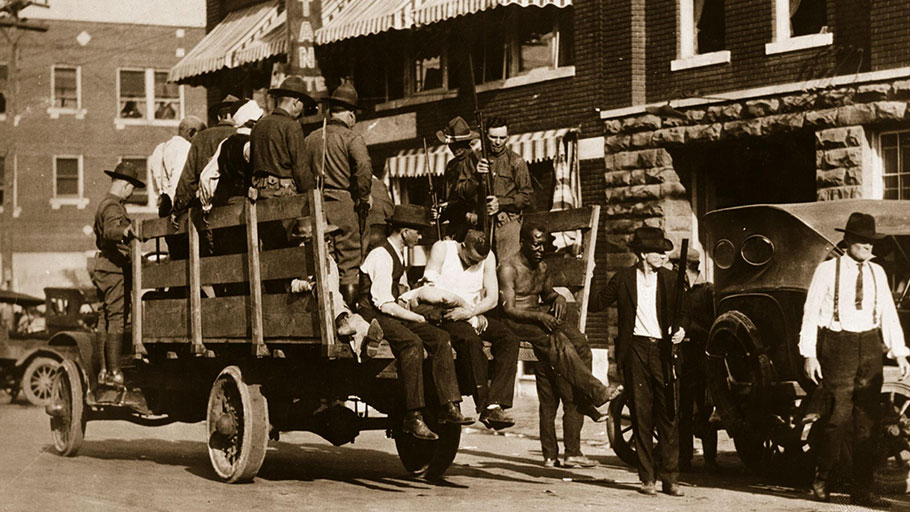 Injured and wounded prisoners are taken to hospital under guard after the Tulsa, Oklahoma race riots in 1921 when up to 300 African-Americans were massacred by white mobs ( AFP/Getty Images )

On 31 May, 1921, white mobs staged a two-day massacre of a thriving black town in Oklahoma, mounting one of the bloodiest episodes of racist violence in US history.

After a black man in Tulsa was accused of assaulting a white woman, an armed mob supported by law enforcement and city officials stormed the Greenwood neighbourhood, where 35 blocks of homes, businesses, libraries, hospitals, schools and churches were destroyed within 14 hours.

Nearly 100 years later, officials in Tulsa plan to excavate what’s suspected is a mass grave, after archaeologists discovered a “large anomaly” in a nearby cemetery, hoping to uncover the scale of a tragedy that echoes through modern America.

On the anniversary of the Tulsa race massacre, human rights groups have also renewed calls for reparations to families impacted by the killings and violence.

The excavation project, announced earlier this year, would “establish the presence or absence of human remains, determine the nature of the interments, and obtain data to help inform the future steps in the investigation, including appropriate recovery efforts”, the city announced in a statement.

“The only way to move forward in our work to bring about reconciliation in Tulsa is by seeking the truth honestly,” Tulsa mayor GT Bynum said in a statement. “As we open this investigation 99 years later, there are both unknowns and truths to uncover. But we are committed to exploring what happened in 1921 through a collective and transparent process — filling gaps in our city’s history, and providing healing and justice to our community.”

Set to begin on 1 April, the excavation has been postponed in the wake of the coronavirus pandemic.

While the Covid-19 outbreak has delayed the unravelling of a crucial but often-neglected episode in America’s bloody history, human rights organisations are urging Oklahoma officials to “act swiftly” to provide reparations to still-living victims and their descendants, and to provide a clear legal path for residents to file civil claims related to the massacre.

“Decades of black prosperity and millions of dollars in hard-earned wealth were wiped out in hours but nobody was ever held accountable and no compensation was ever paid,” said Dreisen Heath, US program advocacy officer at Human Rights Watch and the author of a 66-page report detailing the case for reparations. “Government authorities have an opportunity to fully reckon with these historical and contemporary wrongs by finally doing what they should have done a long time ago, providing reparations to massacre descendants and the black people in Tulsa today.”

In the aftermath of the massacre — later whitewashed as “riots” — Oklahoma declared a state of martial law, moved black residents into internment camps and failed to prosecute a single person for any crime.

Its legacy remains a dark stain in the state’s history, following enslavement, Reconstruction and a Jim Crow-era marked by public lynchings and the beginnings of mass incarceration emerging from slavery.

This year, the Oklahoma Department of Education is expected to incorporate the massacre’s history into its curriculums for the first time.

The massacre received new attention earlier this year as a central event in the acclaimed HBO series Watchmen.

But the massacre’s anniversary this year arrives amid sweeping protests against the killings of black Americans by police officers, galvanising mass movements calling for justice and an end to police brutality and historic racist violence.

“Tulsa stands out for the malicious destruction during the massacre, but the racist systems, policies, and practices that have harmed black Tulsans over decades are not unique,” Ms Heath said in a statement. “In many ways, Tulsa is a microcosm of the United States.”

While hundreds of Tulsa residents are demonstrating against police violence following the killing of George Floyd in Minneapolis, several organisations and churches are also staging memorials and other events to mark the tragedy’s 99th anniversary.

Tulsa residents also protested and mourned following the police killing of motorist Terence Crutcher in 2016; the officer who killed him was found not guilty of manslaughter, and a Justice Department probe didn’t file any charges related to civil rights abuses.

“We have to understand people who have tried to exhaust all means — like we vote, we sign petitions, we march,” Reverend Turner said. “Some people just get frustrated and that’s the only way they vent. They can vent because when the powers that be don’t hear you when you act civilly they find other ways to act.”

Whilea “a reckoning for the massacre and the murder is required and overdue”, apologies and commemorations are only a necessary part of the process but “not enough”, according to Jeffery Robinson, ACLU’s Deputy Legal Director and Director of the Trone Center for Justice and Equality.

“A true reckoning requires action — and leaders of impacted communities in Tulsa should expect action when they speak to the city about making what is wrong right again,” he said.

The argument for reparations also continues in Washington, where members of Congress have tried for years to introduce legislation that would formally establish a committee to develop proposals to “to account for the brutal mistreatment of African Americans during chattel slavery, Jim Crow segregation, and the enduring structural racism endemic to our society,” writes Texas congresswoman Sheila Jackson Lee.

The text of House Resolution 40 says that it would “address the fundamental injustice, cruelty, brutality, and inhumanity of slavery in the United States and the 13 American colonies between 1619 and 1865” through a commission that would study and consider a “national apology” for slavery, and subsequent “racial and economic discrimination against African Americans” and the impact among black communities today.

Its introduction is especially urgent “with the rise and normalisation of white supremacist expression” under Donald Trump‘s presidency, Congresswoman Lee wrote.

“Though critics have argued that the idea of reparations is unworkable politically or financially, their focus on money misses the point of the HR 40 commission’s mandate,” she said. “The goal of these historical investigations is to bring American society to a new reckoning with how our past affects the current conditions of African Americans and to make America a better place by helping the truly disadvantaged. 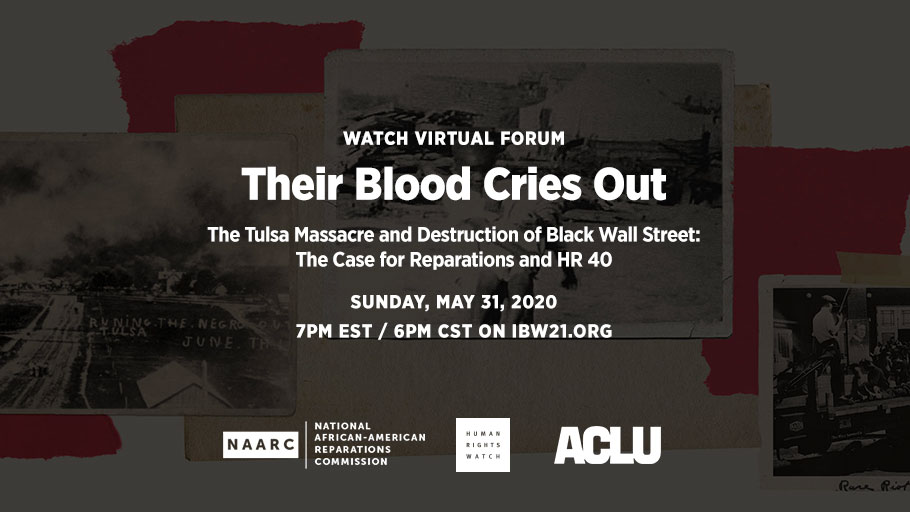 Photo: Injured and wounded prisoners are taken to hospital under guard after the Tulsa, Oklahoma race riots in 1921 when up to 300 African-Americans were massacred by white mobs ( AFP/Getty Images )