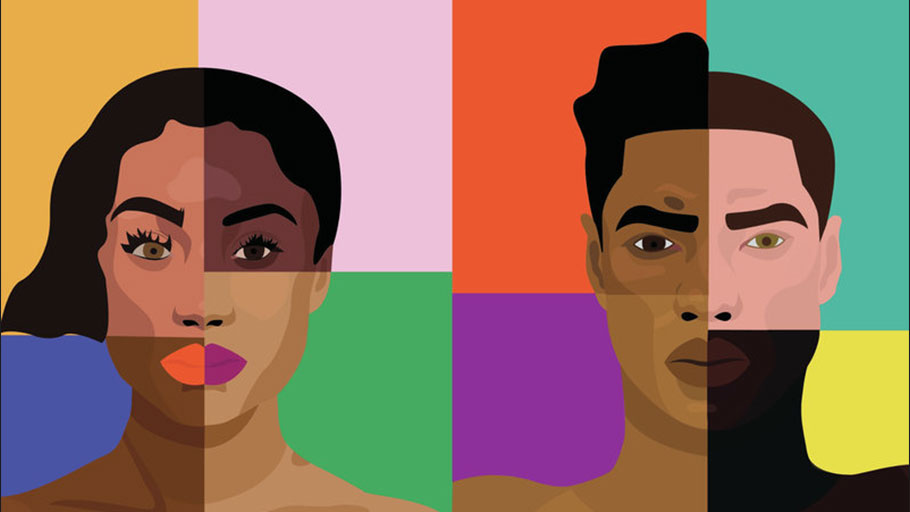 You Are Here: Home » Blog » Reparations » Black Like Who?

Illustration by Bee Harris for NPR.

Reparations And The Elusive Definition of Black Identity

Black folks have officially been categorized by the government as a bunch of different things, depending on the political moment. During the very first U.S. census back in 1790, it was simply “slaves.” In 1840, it was “free colored males and females” and, of course, slaves. What was “black,” “mulatto,” “quadroon” and “octoroon” in 1890 eventually gave way to “Negro” in 1950.

And now, in 2020, it’s “Black or African American,” with the option to write in a country of origin. Just like the nomenclature on the census, who counts as black in the United States has always been evolving — and being on one side of that line or the other has always been enormously consequential.

This week on the podcast, we talked to a lot of people about the ever-shifting boundaries of blackness, including Christina Greer, an associate professor of political science at Fordham University. She’s the author of the book Black Ethnics: Race, Immigration, And The Pursuit Of The American Dream.

A lot of fascinating stuff that Greer said got left out of the final cut of the show, so here’s the director’s cut of our conversation about how black groups see one another and the resulting implications for black identity.

This interview has been edited and condensed for clarity.

To research your book, you hunkered down with a large labor union in New York City, and you asked the black members of this union — some African, some Afro-Caribbean, some Black American — how they thought about blackness.

Right. I wanted a union because of a few things. One, I wanted to control for class; I didn’t want to interview, say, taxicab drivers, dentists, nannies and engineers, because I was afraid that some of my responses might be due more to financial status and occupation. Within this union, everyone makes different amounts of money, but there’s kind of a shared ethos in a shared occupation. I wanted to see how much black identity meant to them, in a very political, not sociological sphere.

You found that although Afro-Caribbean respondents would ethnically distinguish themselves at times — say, identifying as Haitian or Jamaican — they were also the group most supportive of a shared black racial identity and they articulate most forcefully the inequities persistent in the United States.

You contrasted that with African respondents, who you said “expressed positive opinions pertaining to the possibility of success in America and the least favorable attitudes towards other black ethnic groups.” What is going on there?

I thought that Afro-Caribbeans’ [attitudes] would be in the middle of black Americans and African groups, in the sense that [they might feel there] is the ability to succeed in this country. But you understand that there’s some parameters and some barriers to that success.

African groups were the most optimistic, which is not surprising. They’ve been here the shortest amount of time as a wholesale group, and there’s still a lot of optimism there.

Black Americans were in the middle. There seemed to be this kind of you-win-some, you-lose-some attitude. You know: you could have a kid who’s a Ph.D. or an NPR host, or you could have a kid who’s incarcerated for 25 years for a bag of weed — what are you going to do? There’s an understanding that you can work really hard and succeed, and this country can just come and pull the rug from underneath you. But you still have to just keep moving.

So on one end, African immigrants had the most optimistic outlook about black opportunity in America, Caribbean folks were the most pessimistic, and black Americans are in the middle.

Yes. And that is not what I hypothesized. What I found with my Afro Caribbean respondents was a sense of frustration. They were saying, “I’m now considered black in America. There’s some limits to my success as an immigrant. And that’s not right.”

At once, you have a shared identity with black people in the United States, Black immigrants aren’t allowed to become American the way other immigrant groups are. If they are to assimilate or acculturate, they become black American.

This was the first time that when I spoke to people, they were choosing to remain immigrant. There’s a long legacy of people coming to this country trying to assimilate as quickly as possible so that they can become American. [But] to become American for a Caribbean or an African means to become black American, and that wasn’t necessarily something they wanted for themselves [or] their kids, either. There is a certain element of danger [for] a black American child in this country.

So you have these three big categories that we’re using for this conversation — Afro Caribbeans, Africans, and black Americans. I want to get a sense of who we’re talking about, demographically. You write that in the late ’60s, we first saw a really big wave of black immigrants coming to the U.S. Can you tell us about how big that population is today, relative to the larger black population of the U.S.?

We saw trickles [of immigration] in the ’20s, ’30s, ’40s and ’50s, for sure. But the passage of the 1965 Immigration Act completely changed the face of immigration, and this is how we get people from Central and South America, Asia and the Caribbean. This is also the time where we start to see sprinklings of Africans coming over. But it’s not until the ’80s where we start seeing real significant numbers.

Now, blacks are the third-largest population in America. Latinx populations are the second-largest, and whites remain the largest group. And we have to remember the undocumented population; black immigrants, largely from Africa but many from the Caribbean as well, are roughly 10 percent of the undocumented population. [But they make up] 20 percent of deportations [resulting from conviction], because black immigrants tend to live in black communities with black Americans.

Those communities are hyper-surveilled, overpoliced. What some people would just argue is not a big deal — “It’s just a stop and frisk,” or “It’s just a quick search for some marijuana”— can turn into an ICE arrest and completely upend a family and a community. There’s a really specific anti-blackness that is part of the fabric of this nation that black immigrants get caught up in, because they’re with black Americans, because of residential segregation, because of educational segregation.

Your book is about identifying and clarifying points of political divergence among different black groups. So on which issues do you find the greatest amount of contrast between black Americans, Africans and Afro Caribbeans?

When things are couched in a racialized sense, we see more unity. So if it’s a black-versus-white issue, it’s much easier to think about building substantive coalitions. If things are built into like a more intraracial conversation — such as immigration, or aid to Africa — that’s where it gets a little stickier.

I’m wondering if, over time, the pendulum will swing and Africans will become essentially where Afro-Caribbeans are: “You know what? This place is really not fair.” Or if Afro Caribbeans will sort of settle in the middle with black Americans — “it’s not great, but you can still succeed” — or if they’ll remain calcified. I’m not exactly sure.

But I want to go back to the last question [about points of political divergence and convergence]. What I thought was really fascinating was not just about perceptions of other groups. So I asked black Americans, Afro Caribbeans and Africans, whether or not they thought each group worked hard. It was no surprise that Africans thought Africans worked the hardest or that Afro Caribbeans thought Afro-Caribbeans worked the hardest.

But what really saddened me was that black Americans thought that Afro Caribbeans and Africans worked the hardest, too. [As individuals], they felt they worked hard, but there’s a stereotype about the [larger] group not being hardworking. It’s, in a lot of ways, patently false when we think about how black Americans have built this nation and kept it democratic for centuries. Stereotypes of black Americans are permeating into black Americans’ own perceptions of themselves, which I thought was probably the most damaging finding that I discovered in my quantitative data.

This article was originally published by NPR.