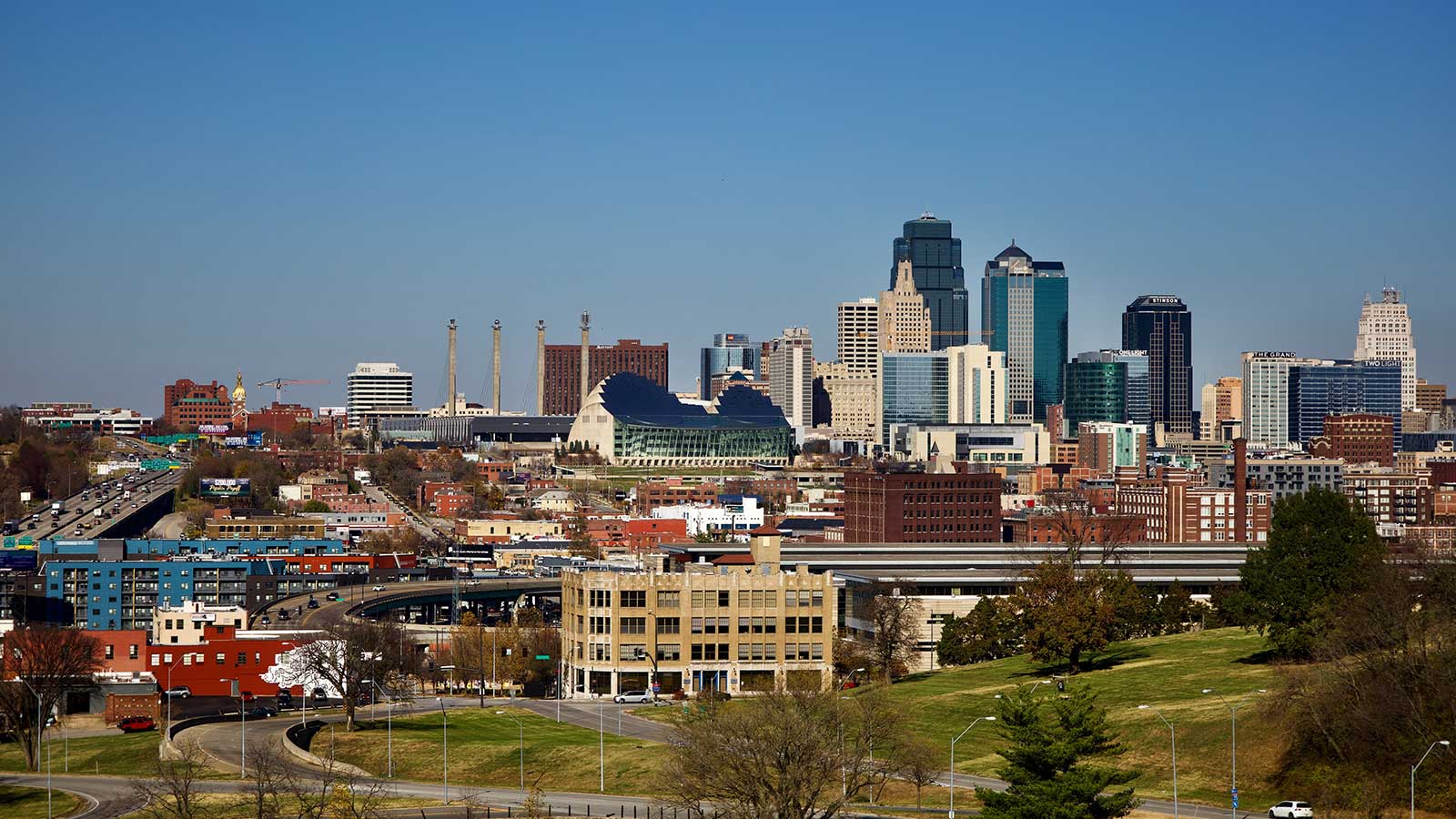 Communities across the country are talking about reparations. What about Kansas City?

You Are Here: Home » Blog » Reparations » Communities across the country are talking about reparations. What about Kansas City?

Kansas City groups are talking about reparations as cities such as Evanston, Illinois, either implement or discuss their own programs to address past harm to Black residents.

Every Congressional session for nearly three decades, the late Democratic Rep. John Conyers of Michigan introduced HR 40, calling for a national commission to study the impact of slavery and discriminatory policies on African Americans and to recommend remedies, including reparations.

The measure languished until earlier this year, when a House committee voted to advance it to the floor for an eventual vote. Notable as the victory was, such a commission is likely years away from becoming law. A national reparations program, if ever approved, is even more distant.

But Black activists and residents in the Kansas City area have begun discussing reparations at the local level, exploring ways in which government, business and society could provide compensation for past harm and injustice within the metro.

“In addition to the role of the federal government, we think local institutions as well as the state itself have played a role” in past wrongs, said Mickey Dean, a retired deputy director of the Kansas City Human Relations Department who is involved in the effort.

A growing number of cities are talking about and advancing programs to address past harm to Black residents. The initiatives are intended to help close wealth gaps and other disparities created by decades of anti-Black racism, including redlining, Jim Crow laws and, before that, the enslavement of Black people.

Evanston, Illinois, in March became the first U.S. city to approve a reparations program for qualifying Black households, which will receive $25,000 for home repairs or down payments on property. The Chicago suburb plans to put $10 million toward the effort over the next decade.

Other cities — including Providence, R.I., Asheville, N.C., and Amherst, Mass. — have either approved their own programs or are weighing proposals. This is going forward even as strong disagreement exists among scholars and activists about whether these initiatives, which can be limited in scope, should be called reparations.

Mayor Quinton Lucas is among the urban leaders exploring how reparations might work locally.

“Mayor Lucas has been engaging in discussions about reparations with several of his mayoral colleagues from around the country, and momentum is building for a coalition that will examine possible means of reparations in the near future,” spokesperson Morgan Said said.

Lawmakers in several states have also proposed reparations studies. California has established a task force to examine the issue. Similar efforts seem unlikely in the near future in Missouri, where legislators considered banning schools from teaching the 1619 Project, which places “the consequences of slavery and the contributions of Black Americans at the very center of our national narrative.”

The Kansas City Council voted on April 8 to go on-record supporting HR 40. But while it awaits further action in Congress, momentum is building in the metro.

Justice Horn, a Kansas City activist and candidate for the Jackson County Legislature, said government at all levels has a role to play in “being an equalizer in the community.”

“When you look at where Kansas City is today, Black Kansas Citians, the longer we stay in our current state the worse things are gonna get,” Horn said.

In Kansas City, discussions appear to be at a very early stage. A collection of local groups, which includes the Southern Christian Leadership Conference, the National Black United Front and NAACP, have been meeting monthly since last fall, said Dean.

“What we’re trying to do, on the one hand, is really articulate the harm in all of those areas that really has taken place in our community. And two, to determine who is responsible, what institutions are historically responsible,” Dean said, adding they will then decide whatreparative measures should be sought.

Fully understanding the scale of past harm, let alone assigning a value to it, could prove difficult. But even the roughest, most incomplete of estimates show past actions and policies exacted a staggering financial cost.

An analysis of redlining — the practice of refusing loans or insurance to someone based on where they live — demonstrates how predominantly white Kansas Cityneighborhoods were given the most favorabledesignations by the Home Owners Loan Corporation, a federally-sponsored agency created under the New Deal in the 1930s. Today, those communities are much more financially prosperous than Black neighborhoods that received the lowest grades. Maps produced by HOLC marked the least-favorable areas with red ink.

The study by Strong Towns, an organization focused on rethinking city development, and Urban3, a data analytics firm,show that financial productivity is about $1.9 million an acre per year in the best-ranked areas, compared to $175,000 in redlined communities, an annual gap of 1,100%.

“That’s 11 times more wealth, 11 times more tax revenue, from the federally-supported zone than the redlined area. And that is just one year; the community has experienced this self-inflicted loss of capacity year over year for more than eight decades,” wrote Charles Marohn, the president of Strong Towns.

In Kansas City, Kan., the same analysis estimated redlining’s role in keeping lots vacant in a single 1/2 square mile area had cost more than $30 million in tax revenue since 1937.

At a national scale, the costs are even larger. William Darity, a professor of public policy at Duke University, estimates thevalue of reparations nationally at about $11 trillion. It’s the amount he says would be necessary to close the wealth gap between Black and white Americans. Black Americans with ancestors who were enslaved represent about 12% of the population, but hold less than 2% of the nation’s wealth, he has said.

Darity defines reparations as including three components. First, harm must be acknowledged. Second is redress, where victimized individuals and communities are compensated. The last element is closure, when an agreement is reached and the debt has been paid.

The local initiatives currently receiving attention across the country, while well-intended, don’t constitute reparations, Darity said. The federal government should be the culpable party bearing the costs.

“Certainly, if you set as your goal elimination of the racial wealth gap, it’s virtually impossible for localities and state governments to actually engage in reparations proper,” Darity said.

In 2017, spending by state and local governments totaled $3.1 trillion, according to the Urban Institute. They would have to devote the entirety of their budgets for years to approach the $11 trillion Darity says is needed.

“This is absolutely unrealistic,” Darity said. “So people talk about local actions or initiatives as reparations in light of an objective of eliminating the racial wealth gap, then they’re just engaged in mystification.”

The United States and other countries have paid reparations before but not a similar scale. Japanese Americans interned during World War II and their heirs received $20,000 checks at a total cost of about $1.6 billion. Germany has paid victims of the Holocaust about $80 billion, as recently as 2020 to aid survivors during the pandemic.

Darity made clear he isn’t objecting to local programs, only to the label. “There’s good reasons for localities to take steps to reverse their history of racist practices, but I feel strongly they should not be referred to as reparations,” he said.

Others employ a more expansive definition.

“Evanston … multiplied it,” Daniels said. “Everybody was watching to see what would happen.”

In August, NAARC endorsed the program as as a national model.

The program received overwhelming support from Evanston’s city council. To qualify, residents must have lived in the city or been a direct descendant of a Black person who did between 1919 to 1969, who suffered discrimination in housing because of city ordinances, policies or practices. Individuals who were discriminated against after 1969 because of the city’s policies or practices also qualify.

The program will be largely funded through sales tax revenue from recreational marijuana.

Critics have said the program is either too small or isn’t actually reparations. Cicely Fleming, the only council member to vote against the plan, wrote in a column for USA Today that the program’s housing assistance would only help 16 families when thousands have suffered from the city’s racist policies over the past century.

“Most significant, it does not give those harmed autonomy and self-determination, most often represented by cash payments. Instead, it places myriad restrictions on how, when and where the so-called reparations can be used,” wrote Fleming, who is Black.

Daniels said that while the program focuses on housing, Evanston also could work on other areas in the future based on how the community responds. He acknowledged objections that it doesn’t include cash payments or is essentially a housing voucher, but praised city leaders for holding firm.

In Kansas City, Dean emphasized discussions on reparations have a long way to go.

But Evanston, H.R. 40 and murder of George Floyd have combined to create heightened interest, both locally and across the country. During the 2020 presidential election, major Democratic candidates spoke openly about it for likely the first time in the modern era.

Both Rep. Emanuel Cleaver, a Kansas City Democrat, and Rep. Cori Bush, a St. Louis Democrat, are co-sponsors of the House legislation. The measure has never received a vote on the House floor, but supporters are hopeful that Speaker Nancy Pelosi will bring it up for debate.

For supporters of local reparations, a possible next step is seeking an official city commission to study the issue. A commission would likely mean more resources devoted to documenting the past harm inflicted on Black residents and their descendants and eventually plans for action.

“I think there needs to be a longstanding department in city government that actually implements this and gives recommendations to city council on what exactly, through research and data-driven decisions, what exactly is needed to get our Black community up to where they need to be,” said Horn.

Ultimately, Dean is clear-eyed that turning reparations into reality will take time.

Still, he fears that closing the wealth gap using only traditional means, such as affirmative action, could take centuries. Meanwhile, disadvantaged Black residents will continue to age and eventually die without ever seeing compensation for the wrongs suffered by them and their ancestors. Something different is needed. “We know this is a tough fight,” Dean said.

The Star’s Katie Bernard and Bryan Lowry and the Associated Press contributed to this story.