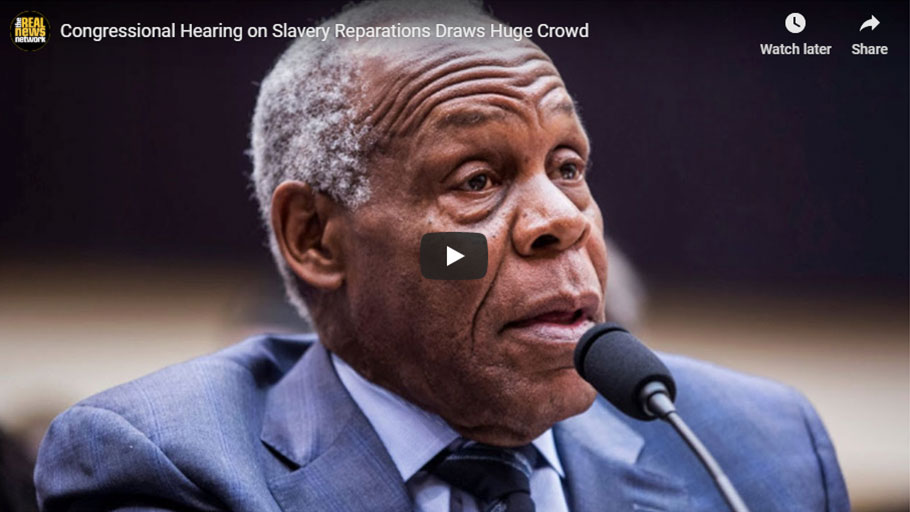 Large and passionate crowds gathered to witness historians, economists, academics, and politicians testify for the first time in nearly a dozen years on H.R. 40, the landmark House bill to convene a commission to study reparations.

JACQUELINE LUQMAN: This is Jacqueline Luqman outside of the Rayburn House Office Building, where inside the hearing on reparations is being held–the first hearing on reparations in almost a decade. Inside, Ta-Nehesi Coates, Danny Glover, Cory Booker, and several other House Democrats and Republicans, as well as other historians, intellectuals, and academics, are testifying on the need for reparations for not just slavery, but for the legacy of racism and discrimination that happened after slavery that contributed to, and some will argue even created, the massive racial wealth and income gap that exists between black and white Americans today.

CAMERON CLARKE: We see it every day. Just recently with the excessive force used in Phoenix against that young couple of the four year old girl who walked out of the store with a doll, and they tormented that family because of their racist views.

JACQUELINE LUQMAN: Coalitions formed by groups of people across different faith traditions and different generations expressed the need to pursue reparative justice through these hearings as a first step.

MALIK ZULU SHABAZZ: We were all brought here on the same ships, on the plantation. And when there was time to lynch, our people, going into the 1900s, when lynchings were wholesale throughout the country, they didn’t stop to ask whether you are a Christian or whether one is a Muslim, and they don’t ask today under the whip of police brutality what religion they are. They know that we’re black people.

PASTOR TED SUTTON: We may not come one together on every tiny little detail. Everybody that is on the side of this wall, I’m seeing different people from different races and different religions. But what I do see is people do understand when they see injustice. And when you see it going on continuously at some point someone has to stand. So I told my children when they get older, when this time–and they’re looking back in history, I want them to say that my father stood for something, and he stood up for justice.

MALIK ZULU SHABAZZ: We’re here to hold a strong line. We’re here to say that this goes beyond steady, and that we have calculated as attorneys that at least $10 trillion in financial compensation is due right now. We have calculated that at least acres in territory that could equivocate up to at least nine states are due right now to our people. We understand that our calls may be represented here in Congress, but if Congress can’t handle this, the international forums and arenas must be pursued; the United Nations and other forms. Worldwide pressure must be brought upon–to bear upon our cause.

JACQUELINE LUQMAN: He mentioned the figure $10 trillion, and that speaks to a legal case. Of course, Dr. Charles Ogletree has done some work, a lot of work, a lot of foundational work on the legal case for reparations. Does this effort pick up on his work, or is this different?

JACQUELINE LUQMAN: All right. Final question. $10 trillion. What do you say to people who say we can’t afford it.

JACQUELINE LUQMAN: We spoke with Adjoa Aiyetoro, a professor of law at the University of Arkansas at Little Rock, and a founding member of N’COBRA, who said that she was encouraged by this hearing, the turnout, and even of the participation of some Republican lawmakers. But she also made clear that she understands that there is a lot of fight ahead in this battle for reparations.

ADJOA AIYETORO: I was the co-chair of an NCBl, National Council of Black Lawyers, when we founded NCOBRA.

JACQUELINE LUQMAN: What is NCOBRA?

ADJOA AIYETORO: NCOBRA is the National Coalition of Blacks for Reparations in America, co-founded by National Council of Black Lawyers, RNA, and New African People’s Organization.

JACQUELINE LUQMAN: So I know you’re running, you’re on your way. Are you encouraged by this hearing?

ADJOA AIYETORO: I’m very encouraged. We’ve been working around reparations since the early ’80s. This is tremendous to have this hearing. We’ve had other hearings, but not with this level of participation from the Republicans, which means that it’s going to gather more steam, because now it can be seen as something that we really need to address. This panel here is fabulous, as well.

ADJOA AIYETORO: Well, there have been in the past. On this panel I don’t know, because I had to leave early. The point being, though, that when you get both parties at the table, you can begin to push through some understandings that may lead to passage of this bill. I am not naive. I know we have still an uphill battle. I’m not naive that even all the Democrats are going to get behind it, much less a lot of Republicans. My feeling, however, is being at the table means they’re willing–some of them, not all, by any means–are willing to discuss it seriously.

JACQUELINE LUQMAN: People from all walks of life were here standing on long lines to wait to get into the hearing room or into the overflow room to witness this historic event in this ongoing fight for reparations for African Americans. People are also here to acknowledge that they are the ones who have to educate their communities on the need to pursue this justice, not just for African Americans, but why it’s important for all of us.

LINDA KEELY: Well, I’m here because I believe that it’s time to make amends to people of color for the 400 years of exploitation and oppression and unpaid forced wages in captivity, and just, you know, the just incredible wrongdoings that people of my color have perpetrated on people of color. And I think it’s important for what I had shared with you, it’s important for white people to educate other white people about history that we may never have heard about.

JACQUELINE LUQMAN: White people who are resistant to reparations say that it’s a handout, and that we can’t afford it, and why should we pay for what our ancestors did, or we never owned slaves, and those kinds of responses. How do you respond, understanding that it’s white people who need to educate white people on why this is important?

LINDA KEELY: Well, you know, my ancestors were never slave owners, but I know throughout my life when I applied for college, when I applied for jobs, when I went to get a mortgage for my home, when I rented apartments, that I’ve gotten a privilege that people of color have not just because of the color of my skin. And you know, I think if we’re ever going to move forward as a country, just like we did for Japanese internment camps, just like we’ve done to a much, much smaller extent than needed for Native Americans, we need to make amends and make reparations to people of color.

LINDA KEELY: I am. I’m here in solidarity. If I can’t get in and watch, I just want to be here and show that white people care.

JACQUELINE LUQMAN: Thank you so much.

LINDA KEELY: I should say, some white people care. So I don’t want to speak for all white people, but I care.

JACQUELINE LUQMAN: We will see what happens with this hearing. But it seems to be a good start, or a good restart, to a very important conversation. This is Jacqueline Luqman in Washington D.C. at the Rayburn House Office Building. This is The Real News Network.