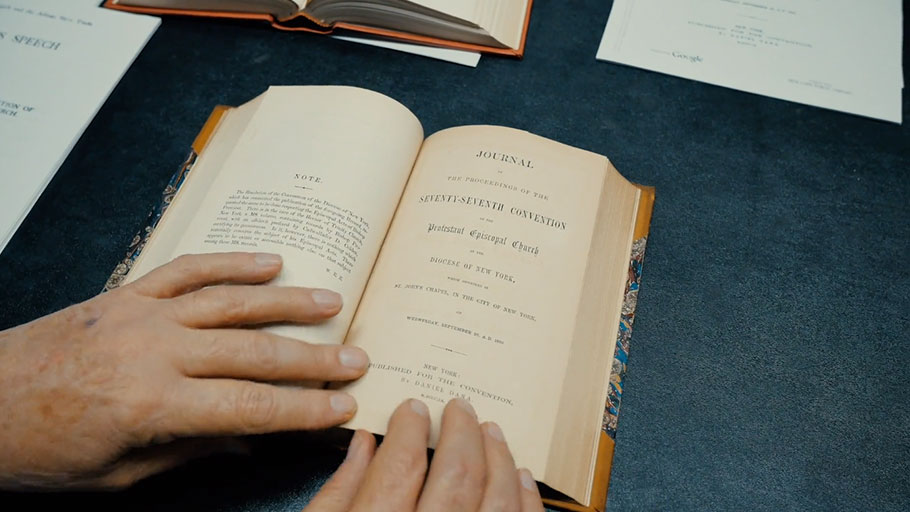 At its annual convention on Nov. 8 and 9, the Diocese of New York established a task force to examine how it can make meaningful reparations for its participation in the slave trade and committed $1.1 million from its endowment to fund the efforts the task force recommends.

It also passed four resolutions condemning slavery, which had first been introduced by John Clarkson Jay – grandson of founding father John Jay, governor of New York and first chief justice of the Supreme Court – in 1860. At the time, the resolutions were met with fierce opposition from the clergy and laity, many of whom were still profiting from the slave trade, and they had been tabled indefinitely until now, according to the diocese.

New York Bishop Andrew M.L. Dietsche has made racial reconciliation a priority in his diocese, which designated 2017-18 a Year of Lamentations, 2018-19 a Year of Repentance/Apology and 2019-20 a Year of Reparation.

“The legacy, the shadow, of white supremacy which flows from our slave past and continues to poison the common life of the American people … continues to impose extraordinary burdens, costs, hardships and degradation upon people of African descent in our country,” Dietsche said in his address to the convention. “The Diocese of New York played a significant, and genuinely evil, part in American slavery, so we must make, where we can, repair.”

Dietsche noted in his address that in the 18th century, a high proportion of New Yorkers were slave owners, and according to diocesan records, some churches owned slaves as parish servants or “property assets.”

“We have a great deal to answer for,” Dietsche said. “We are complicit.”

At the 1860 convention, Jay, an ardent abolitionist, introduced four resolutions urging the leadership and laity of the diocese to publicly renounce and oppose slavery and slave trading. Importing slaves had been illegal in the United States since 1808, and the last remaining slaves in New York were freed in 1827. However, the Port of New York was still considered “the largest slave market in the world” as late as 1859, being the home port for ships that sailed across the Atlantic to abduct Africans and generate profits for New York merchants.

Jay wanted his diocese to take a firm stand against the human trafficking that continued “in violation of the statutes of the Republics, of the teachings of the Church, of the rights of man, and the laws of God.”

“Enough people rose and left the floor of the convention to deny the action even the possibility of a quorum,” Dietsche said.

Diane Pollard of the diocesan Reparations Committee said it was decided to bring back the resolutions at this convention in part because “it is so painful” to have them still sitting on the table, an unfinished chapter of an ugly history.

“It is painful to people who have family that were slaves,” Pollard said in a video produced by the diocese about the resolutions.

Dietsche referred to the passing of the resolutions as “the fruit of the Year of Apology” but noted that “there is a third and final chapter to this movement, which begins now with this convention, and that is the Year of Reparation.”

In his address, Dietsche called for a previously unannounced resolution “to set aside $1.1 million from the diocesan endowment for the purpose of reparations for slavery.”

“Much smaller, and the resources for significant reparation would be insufficient; much larger, and it might not be something we could do,” Dietsche said. “When I ask that we remove this much money from our modest endowment, I know that this is not a small thing. However, I am sure that any honest process of reparation must require sacrifice and a commitment, not only from our surplus but from our seed corn.”

The resolution included the creation of a task force that will determine how best to structure the reparations effort and make recommendations at the next diocesan convention. Dietsche emphasized that the effort is about more than simply spending money, but he brought up several specific possibilities.

“This money could produce five $10,000 college or seminary scholarships every year in perpetuity,” Dietsche said. “This money could establish and fund an education and advocacy library and resource center in this diocese dedicated to racial justice and reconciliation. This money could support a first-step program in this diocese to invite, nurture and prepare black young people, and men and women, to explore the possibility of ordained ministry. $1.1 million isn’t so much money, but it’s not nothing either, and I look forward with anticipation to the creative possibilities that might come from this initiative.”

This article was originally published by Episcopal News Service.