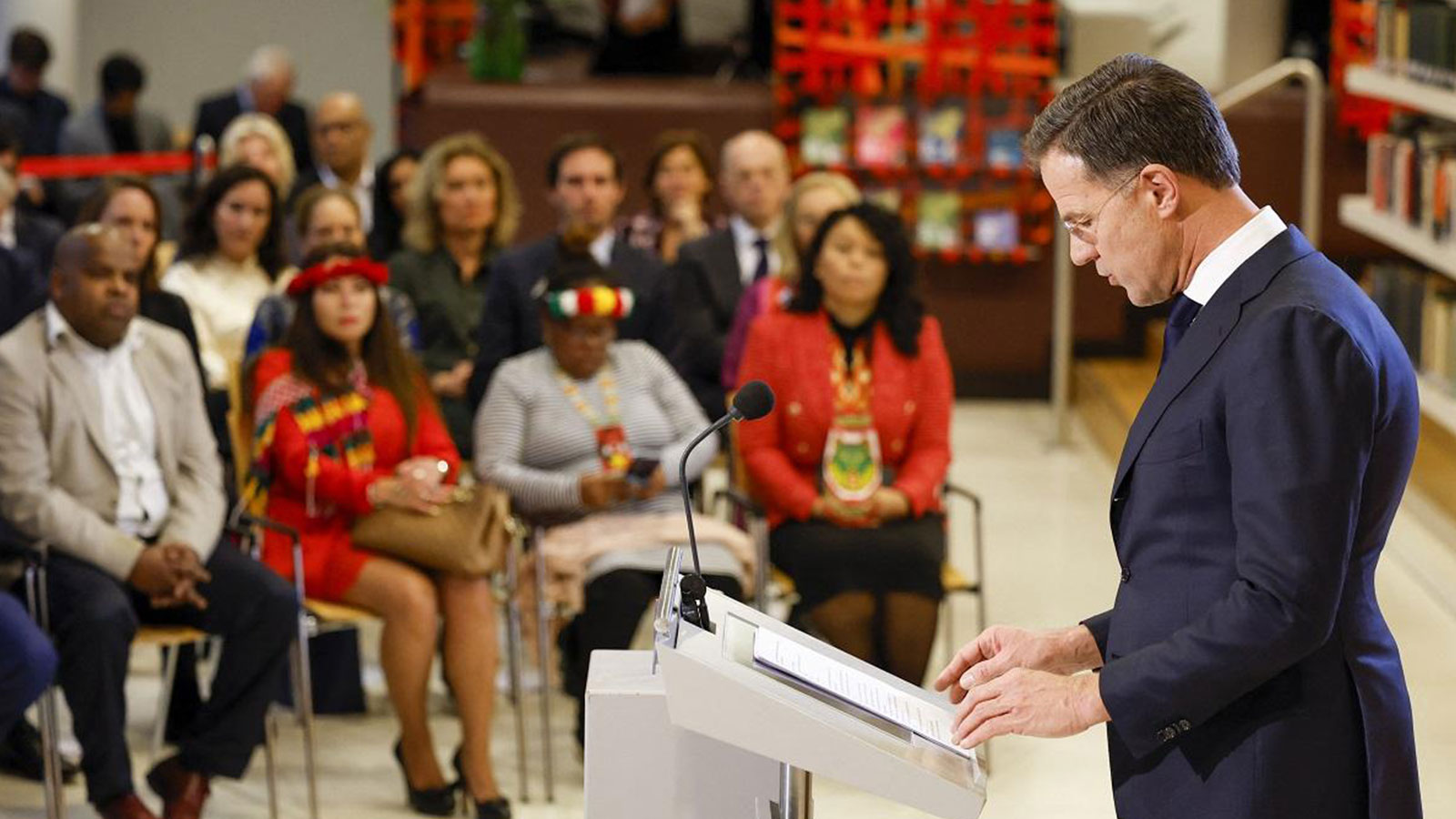 You Are Here: Home » Blog » Reparations » Dutch PM apologizes for 250 years of slavery

Mark Rutte apologized Monday on behalf of his government for the Netherlands’ historical role in slavery and the slave trade.

Dutch Prime Minister Mark Rutte on Monday officially apologized for 250 years of the Netherlands’ involvement in slavery, calling it a “crime against humanity”.

The apology comes almost 150 years after the end of slavery in the European country’s overseas colonies, which included Suriname in South America, Indonesia in the east and Caribbean islands such as Curacao and Aruba.

In the first of the former Dutch colonies to react, Aruba’s Prime Minister Evelyn Wever-Croes accepted the apology, but others like the island of Sint Maarten said it would not.

“Today on behalf of the Dutch government, I apologize for the past actions of the Dutch state,” Rutte said in a speech, repeating the apology in English, Papiamento and Sranan Tongo, languages spoken on the Caribbean islands and in Suriname.

“The Dutch State of the Netherlands… bears responsibility for the great suffering inflicted on enslaved people and their descendants,” Rutte told an audience at the National Archives in The Hague.

“We, living in the here and now, can only recognize and condemn slavery in the clearest terms as a crime against humanity,” he added.

But after the speech, representatives in Suriname complained of a lack of concrete action by the Dutch government.

“I don’t see much with regard to action by the Netherlands and it’s a shame,” Iwan Wijngaarde, head of the Federation of Afro-Surinamese, told AFP.

“What was completely missing in this speech was responsibility and accountability,” Armand Zunder, president of Suriname’s national reparations commission, told AFP.

Dutch ministers have travelled to seven former colonies in South America and the Caribbean for the event.

Dutch Deputy Prime Minister Sigrid Kaag said on an official visit to Suriname last week that a “process” would begin leading up to “another incredibly important moment on July 1 next year”.

Descendants of Dutch slavery will then celebrate 150 years of liberation from slavery in an annual celebration called “Keti Koti” (Breaking the Chains) in Suriname.

But the plan has caused controversy, with groups and some of the affected countries criticizing the move as rushed, and saying the lack of consultation by the Netherlands smacked of a colonial attitude.

Some are also demanding compensation.

Rutte in his speech on Monday said that choosing the right moment was a “complicated matter”.

The Dutch funded their “Golden Age” of empire and culture in the 16th and 17th centuries by shipping around 600,000 Africans as part of the slave trade, mostly to South America and the Caribbean.

At the height of its colonial empire, the United Provinces known today as the Netherlands possessed colonies like Suriname, the Caribbean island of Curacao, South Africa and Indonesia, where the Dutch East India Company was based in the 17th century.

In recent years, the Netherlands has been grappling with the fact that its Rembrandt and Vermeer-filled museums and historic towns were largely built on the back of that brutality.

Spurred by the Black Lives Matter movement in the United States, it has also raised questions about racism in Dutch society.

Pressure has been growing at home with the cities of Amsterdam, Rotterdam, The Hague and Utrecht formally apologizing for the slave trade.

Rutte had long resisted, previously saying the period of slavery was too far back and that an apology would ignite tensions in a country where the far right remains strong.

He has now changed tack, but that has not pleased everyone.

“Let me be clear that we won’t accept an apology until our advisory committee has discussed it and we as a country discussed it,” she said.

But on Aruba, Wever-Croes told the ANP news agency the island accepted the apology, but stressed “it is a first step.”

On Monday, Dutch cabinet ministers would be in Suriname, Bonaire, Sint Maarten, Aruba, Curacao, Saba and St. Eustatius to “discuss the cabinet response and its significance on location with those present” after the Rutte speech, the government said.

Slavery was formally abolished in Suriname and other Dutch-held lands on July 1, 1863, but the practice only really ended in 1873 after a 10-year “transition” period.

Slavery commemoration groups say any apology should come on the 150th anniversary of that date, in 2023, instead of the “arbitrary” date of December 19 this year.

Featured image: Dutch Prime Minister Mark Rutte speaks at the National Archives in The Hague, on December 19, 2022 during which he officially apologized for 250 years of the Netherlands’ involvement in slavery, calling it a crime against humanity. (Robin van Lonkhuijsen/ ANP/ AFP)