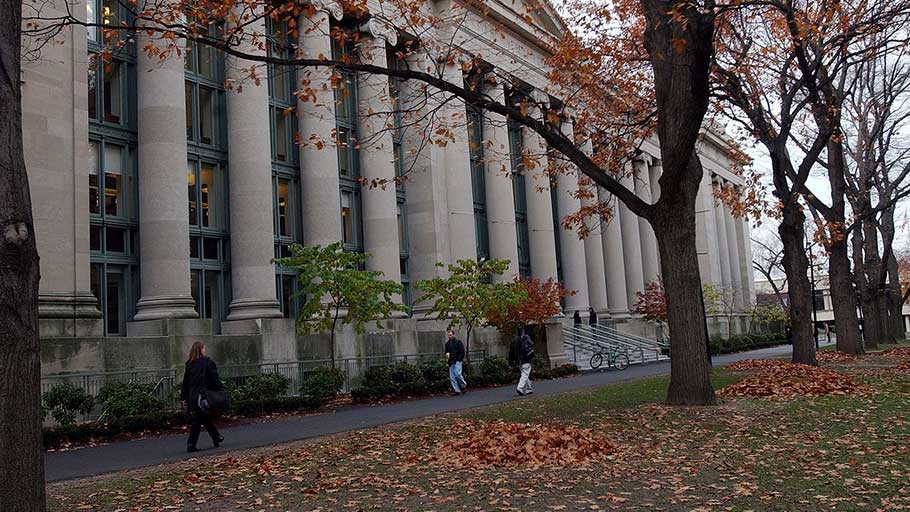 In this Nov. 19, 2002, photo, students walk through the Harvard Law School area on the campus of Harvard University in Cambridge, Mass. (Chitose Suzuki/AP)

In an urgently worded letter recently sent to Harvard, Antigua and Barbuda Prime Minister Gaston Browne demanded that the university pay his country reparations “for the gains Harvard enjoyed at the expense” of Antiguan slaves.

“We consider Harvard’s failure to acknowledge its obligations to Antigua and the stain it bears from benefiting from the blood of our people as shocking if not immoral,” Browne wrote.

Browne’s request for reparations comes as numerous universities across the United States, including Harvard, have sought to reckon with their enduring ties to the chattel slavery economy. Last month, Princeton Theological Seminary pledged $27 million in reparations, in the form of scholarships and other initiatives to assist descendants of slaves; in September the Virginia Theological Seminary also created a $1.7 million reparations fund.

Though the university hasn’t committed to reparations, Harvard also has taken steps to extensively research and acknowledge its ties to slavery, particularly related to Royall. Under pressure from students, Harvard Corp. decided in 2016 to retire the Harvard Law School shield, which bore the Royall family coat of arms. And in 2017 the university erected a stone memorial and plaque honoring “the enslaved whose labor created wealth that made possible the founding of Harvard Law School.”

But to Browne, the acknowledgment has not been enough. The university, Browne wrote, has failed to take steps to make more concrete amends with Antigua through reparations. He claimed the university has ignored Antiguan officials’ past requests to begin discussing how reparations could work. He suggested in his letter that Harvard could offer financial assistance to the University of the West Indies campus in Antigua and Barbuda.

“Reparation from Harvard would compensate for its development on the backs of our people,” Browne wrote. “Reparation is not aid; it is not a gift; it is compensation to correct the injustices of the past and restore equity. Harvard should be in the forefront of this effort.”

Harvard spokesman Jason Newton provided Bacow’s Tuesday response letter to Browne. Newton noted Wednesday morning that although Bacow did not respond to a 2018 letter from the Antigua and Barbuda ambassador, a Harvard official did respond to a 2016 letter, which described Harvard’s efforts to confront slavery.

Neither the 2016 letter nor Tuesday’s addresses the core request from Antigua and Barbuda: reparations.

“We recognize that there is more work to be done,” Bacow wrote Tuesday. “Indeed, Harvard is determined to take additional steps to explore this institution’s historical relationship with slavery and the challenging moral questions that arise when confronting past injustices and their legacies.”

Bacow did not specify what the additional steps would be. Browne had requested a meeting between representatives from Harvard and Antigua and Barbuda, but in his letter, Bacow does not say whether he would be open to facilitating such a meeting.

The story of the Royall family begins at the turn of the 18th century, when Isaac Royall Sr. sailed to the West Indies and settled on the island of Antigua to make a living in the lucrative, slave-fueled sugar trade. The son of a carpenter, Royall Sr. had few prospects in the British colony of Massachusetts before moving to the island, according to a 2011 report, “Harvard and Slavery: Seeking a Forgotten History.”

But after purchasing stake in a slave ship named the “Mayflower,” Royall Sr. quickly began to amass his wealth, eventually earning enough to start his own sugar cane plantation in Antigua. That’s where his son, Isaac Royall Jr. — the namesake of Harvard’s first professorship — was born in 1719.

The family wouldn’t stay forever. By the 1720s and ’30s, disastrous hurricanes and earthquakes struck the island, drought left many slaves dying of starvation, and disease and infection ― flourishing among slaves performing the backbreaking work of chopping sugar cane — caused countless other Antiguan deaths, according to the 2015 book, “On the Battlefield of Merit: Harvard Law School, the First Century.”

As a result, Royall Sr. began planning his return to Medford, Mass., as early as 1732. He was finally pushed over the edge after the failed 1736 slave revolt, according to the book.

The bloody event, the authors of “On the Battlefield of Merit” say, is part of Harvard Law’s history, too.

“The oldest and arguably the most distinguished chair in American legal education is Harvard’s Royall Professorship of Law. … But it is a historical fact that this chair is directly linked to a slave revolt on the Island of Antigua in 1736,” wrote Harvard Law School professor Daniel R. Coquillette and Ohio State University professor Bruce A. Kimball.

To plan the revolt, years in advance, about 2,000 slaves gathered in a forest to prepare to overthrow the white government, the professors reported, citing testimony from an 18th-century British inquiry. Slaves in Antigua outnumbered white men 4 to 1 in 1723, according to Coquillette and Kimball’s research. But the alleged revolt conspiracy was never carried out. It instead resulted in the brutal executions of 88 enslaved Antiguans — including the Royall family’s head slave, who was burned at the stake, according to the professors.

The Royalls returned to Medford, Mass., in 1737 and brought their Antiguan slaves with them to work their new 540-acre farm. Royall Jr. inherited much of his father’s wealth, at least 18 slaves and land in Massachusetts and Antigua following his father’s death, according to the “Harvard and Slavery” report. He became a popular statesman in the Massachusetts legislature and in local government — but following the outbreak of the American Revolution, he fled to England, according to “On the Battlefield of Merit.”

In exile, Royall Jr. penned his will in 1778 — in which he awarded the “gift to Harvard College that was to ensure Royall’s lasting fame,” Coquillette and Kimball wrote. He gave the college more than 800 acres of land, which he specified should “be appropriated towards the endowing a Professor of Laws in said Colledge, or a Professor of Physick and Anatomy” — whichever the college thought was best, Royall Jr. wrote.

In 1815, nearly 25 years after the slave owner’s death, Harvard used the proceeds from Royall Jr.’s gift to create the law professorship, establishing the foundation of today’s Harvard Law School.

“The bequest to Harvard came from the proceeds of the plantation in Antigua and from the exploitation and sale of human beings that Royall regarded as chattel,” Browne wrote in his letter. “Professor Janet Halley, on assumption of the Royall Professorship in 2006, was right to acknowledge in her inaugural address that Isaac Royall’s slaves ‘are intrinsically bound, if you will, to the grant that established the Royall Chair.’ ”

Antigua and Barbuda, which celebrated the 38th anniversary of its independence from Britain on Nov. 1, has been working with the Caribbean Reparations Commission for the past several years to make the “moral, ethical and legal case for the payment of reparations by the governments of all the former colonial powers and the relevant institutions of those countries.”

Browne said that Antigua and Barbuda’s ambassador to the United States, Sir Ronald Sanders, wrote to Bacow to press the issue in November 2018. At that time, Sanders pointed out that “the reputation Harvard enjoys internationally is intertwined with the dark legacy of Royall’s Antigua slaves who died in oppression, uncompensated for their lives in slavery and their death in cruelty.” Sanders sought a “genuine effort” from Harvard to begin working toward reparations.