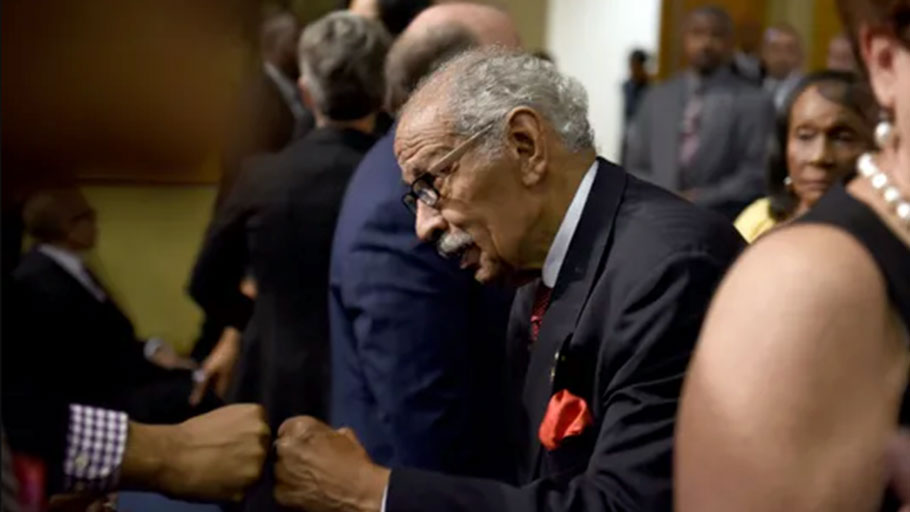 U.S. Rep. John Conyers Jr. introduced a bill in every Congress for nearly 30 years to study the institution of slavery and to recommend appropriate reparations.

Few of his colleagues in the Democratic Party seemed to take him seriously. The bill had a hearing in 2007 and never moved out of committee.

But reparations has become a recurrent topic in the Democratic presidential primary campaign. At least a dozen high-profile candidates have said they would support the successor to Conyers’ bill and sign it if elected president.

“I believe it’s time to start the national, full-blown conversation about reparations in this country,” Sen. Elizabeth Warren, D-Massachusetts, told a town hall in Mississippi in March.

Most candidates have not directly called for reparations, and only one, spiritual book author Marianne Williamson, has discussed hard numbers: $200 billion to $500 billion to be disbursed over 20 years, overseen by a council of black leaders.

“Anything less than $100 billion would be an insult,” she said in an interview.

Julian Castro, the former mayor of San Antonio and former housing secretary, has endorsed reparations to resolve the country’s “original sin” of slavery.

“I believe that’s a conversation worth having, and I see that as right and wrong.”

Proponents of reparations say racial disparities persist due to systemic racial discrimination for which the country needs to atone.

Critics say reparations would be too costly and doubt a causal link between slavery or segregation and the persistence of racial inequality today. 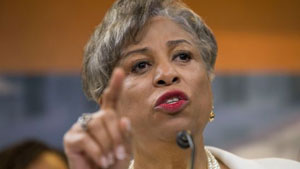 Rep. Brenda Lawrence of Southfield, a co-sponsor of H.R. 40, said the legacy of slavery and Jim Crow segregation cannot be separated from racial disparities in wealth, education, housing and criminal justice today.

“We need to have the conversation, and for anyone who is alive and breathing to know that the impact of slavery and racism on shaping present-day conditions in our community is real. It would be such an amazing breakthrough for this country in race relations,” said Lawrence, the only African American in Michigan’s congressional delegation.

“I am significantly encouraged that people who are running for the United States presidency have the courage and compassion to actually talk about this.”

Not everyone views the candidates as sincere, including Anita Belle, a Detroiter and reparations activist who last month launched her own presidential campaign.

“Some of the people now expressing interest in reparations — it felt a little insincere, like they were just trying to get out the black vote,” said Belle, a co-chair of the Detroit chapter of the National Coalition of Blacks for Reparations in America and president of the Reparations Labor Union. 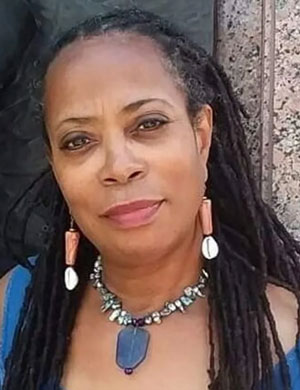 Anita Belle, a reparations activist from Detroit, is running for president (Photo: Courtesy of Anita Belle)

“It’s too important issue, not just for the black community but for the nation to just have it be treated like it’s a political carrot. That’s part of why I wanted to run for office, so we can have a comprehensive approach to reparations.”

Conyers started introducing what’s known as H.R. 40 in 1989, choosing the bill number to symbolize the “40 acres and a mule” promised to slaves by Union Army Gen. William T. Sherman in 1865.

Conyers last reintroduced the legislation on the first day of the new Congress in 2017.

“I’m not giving up,” he said during a briefing, according to NBC News. “Slavery is a blemish on this nation’s history and until it is formally addressed, our country’s story will remain marked by this blight.”

Conyers resigned from Congress amid misconduct charges later that year. Rep. Sheila Jackson Lee, D-Texas, took up lead sponsorship of the bill, which has 52 co-sponsors but remains in committee.

Sen. Cory Booker of New Jersey, another presidential hopeful, recently introduced a version in the Republican-controlled Senate, which is unlikely to take it up.

Conyers “is no longer in Congress, but I hope his contributions are held up and the man is properly attributed for being steadfast in bringing this up every term and keeping it on the forefront,” said economist and reparations advocate Darrick Hamilton at Ohio State University.

“He should be credited for those acts of justice. Whether it was politically viable or even risked political cost, he was steadfast in his claim toward justice.” 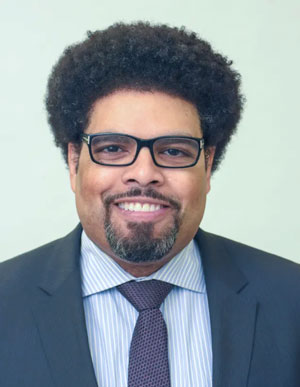 The components of a reparations program would include acknowledgement of centuries of slavery and discrimination, redress through a form of compensation and closure, Hamilton said.

The first step is H.R. 40, he added, by which a congressional commission would authenticate the history and come to a formal consensus on what reparations should look like. They could take the form of checks from the federal government or the transfer of stock or land or other assets.

Hamilton views reparations as critical to addressing the wealth gap between black and white Americans.

“Ifwe do H.R. 40 in a really systematic way, we better understand how we got to this moment of inequality, and it dissipates the ability to bastardize the poor and black and brown people as being undeserving, because of their efforts,” Hamilton said.

Conservatives have argued that reparations aren’t viable in part because there are no slaves to pay reparations to today.

Civil rights attorney Roger Clegg has said that limiting a social program to one race would be unconstitutional, saying the Supreme Court has ruled that claims of societal discrimination to be insufficiently compelling to justify racial classifications.

“We are told that these apologies will help bring closure, help enable us to move on. Nonsense,” Clegg, president and general counsel for the Center for Equal Opportunity, testified in 2007 during a hearing that Conyers convened on H.R. 40.

“The idea is to reopen wounds, to keep grievance alive, to keep white people on the hook. An obsession with past wrongs, to the extent that present opportunity and future promise are ignored or slighted, is a bad thing.”

Barack Obama opposed reparations during his 2008 campaign for president, as did Hillary Clinton and Bernie Sanders in 2016, the latter calling them “very divisive” and unlikely to pass Congress.

“We’re going to do everything we can to put resources into distressed communities and improve lives for those people who have been hurt by the legacy of slavery,” he said at a CNN town hall in February.

But asked directly about reparations, Sanders said, “It depends on what that word means.”

“What does that mean? I’m not sure anyone’s very clear,” he said.

Sanders was perhaps referring to how some of his opponents have framed “reparations” to encompass broader policies that would help black communities.

Booker has proposed a universal “baby bonds” program that would gift every child a savings account with federal contributions that would be greater for children in poverty in an effort to address the racial wealth gap.

A campaign spokesman told NPR that baby bonds can be interpreted as a form of reparations because more money would go to low-income children who are disproportionately black.

Sen. Kamala Harris, D-California, was asked about reparations and spoke about her plan to give families making $100,000 or less a tax credit — a proposal that would aid 60% of black families in poverty, she told the website theGrio.

Williamson said race-conscious policies aren’t enough because they leave open the question of “whose fault it is.”

“The reason I feel that reparations are so important is because reparations carries an inherent mea culpa,” she said.

“There’s an emotional, psychological and spiritual force to reparations that is not there with race-based policies, and it sure as heck isn’t there with one more lame conversation about ‘how we really need to talk about this,’ or ‘we really need to study this.’ The facts are clear. You do it, or you don’t do it.”

Williamson, who “knew and learned from” Conyers during eight years she lived in the Detroit area, is credited with launching the reparations conversation in the Democratic primary in January.

She talks about reparations at every campaign stop, and the topic gets applause even from all-white audiences in Iowa, South Carolina and California, she said.

She tells campaign audiences about how Germany has paid over $89 billion in reparations to Jewish victims of Nazi crimes, and how the U.S. government paid reparations to Japanese Americans interned during World War II. 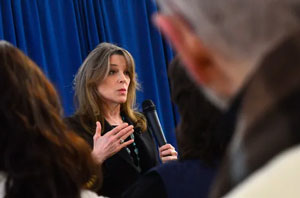 Marianne Williamson, a Democrat from Iowa and presidential candidate, tells campaign audiences how Germany has paid over $89 billion in reparations to Jewish victims of Nazi crimes, and how the U.S. government paid reparations to Japanese Americans interned during World War II. (Photo: Kristopher Radder, The Brattleboro Reformer via AP)

Williamson said reparations won’t mean slavery never happened or that suddenly “everything will be fixed.”

“Obviously, this is a multi-dimensional issue and must be dealt with in multidimensional ways, a lot of which has to do with our own attitudinal healing in terms of privilege and so forth,” she said.

U.S. Rep. Rashida Tlaib, who represents a majority African-American district in Detroit and Wayne County, attributes the shift in tone on reparations to grassroots activists and coalitions raising African American justice issues such as education and police accountability.

“All those things I think are so interconnected to why you all of a sudden see people elevating the issue of reparations,” said Tlaib, who succeeded Conyers in Congress and has co-sponsored H.R. 40.

“This is important atonement for a great wrong in our country that we have really yet to reconcile.”

Hamilton also credits the new attention to reparations to the influence of social movements such as Black Lives Matter, as well as a growing public understanding of the concentration of wealth and political power at the top.

“Also, having someone like Donald Trump, who has been divisive in his political approach, both in rhetoric and in many ways actions, has not afforded America the ability to euphemize our racial divisions,” Hamilton said.

He stressed the significance of race being discussed in a more serious way by presidential candidates and their embrace of H.R. 40.

“Whether particular legislators are getting it right or wrong, I think the really good news is we’re at a point where we can be explicit about race so as to even keep reparations as part of the national conversation,” he said.