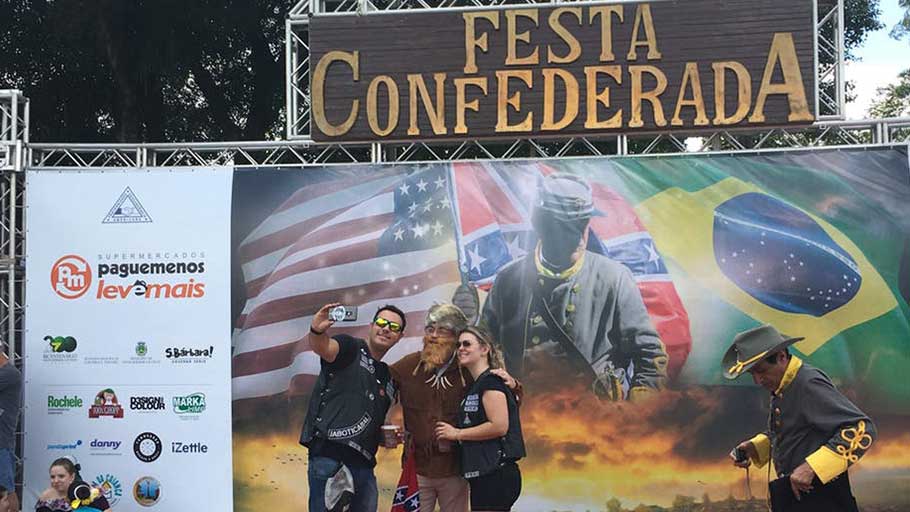 By Jordan Brasher, The Conversation —

The aroma of fried chicken and biscuits roused my appetite as the country sounds of Alison Krauss, Alan Jackson and Johnny Cash played over the loudspeakers.

This might have been a county fair back home in Tennessee, but it wasn’t. I was in a cemetery in rural Brazil, at the “Festa Confederada” – the “Confederate Party” – an annual celebration of southern U.S. heritage held each April in Santa Bárbara d’Oeste, in São Paulo state.

A sign explaining “What the Confederate Flag Really Means” in both English and Portuguese greeted the roughly 2,500 visitors – most of them white – at the entryway of the American Cemetery. Inside, women wearing Antebellum-style hoop skirts square danced with men clad in gray Confederate uniforms. Couples in T-shirts were doing the two-step.

Just outside cemetery grounds stood black activists protesting the April 28 party with signs and banners saying, “Down with the Confederate flag.”

How did an American debate about racism make its way to Brazil? That’s a tangled question I’m unraveling in my dissertation research on the history and meaning of Confederate symbols in Brazil.

The Confederacy comes to Brazil

Brazil has a long, strange relationship with the United States Confederacy.

After the Civil War ended in 1865, ending slavery in the United States, some 8,000 to 10,000 Southern soldiers and their families left the vanquished Confederacy and went to Brazil.

There, slavery was still legal. Roughly 40% of the nearly 11 million Africans forcibly brought across the Atlantic between 1517 and 1867 went to work on sugarcane plantations in Brazil. It was the last country in the Western Hemisphere to formally abolish slavery, in 1888 – 23 years after the United States.

Legal slavery may have been a draw for the Confederate soldiers who migrated to Brazil after abolition.

Brazilian political economist Célio Antonio Alcântara Silva analyzed letters sent to Brazilian consulates and vice-consulates in the United States at the end of the Civil War and found that 74% of Southerners inquiring about emigration were slaveowners.

At the time, 25% of white Southern households owned slaves. That means the people interested in moving to Brazil in the 1860s disproportionately represented a relatively small, slaveholding slice of the free Southern population.

The Brazilian historian Luciana da Cruz Brito has also found evidence in the 150-year-old Confederado journals she dug up that slavery attracted white Southerners to Brazil.

In one, an American named Charles Gunter wrote about his desire to purchase enslaved people in Brazil at a lower price than he could in the U.S. Another Confederado, James Gaston, expressed disappointment that he couldn’t bring recently freed African Americans to Brazil. 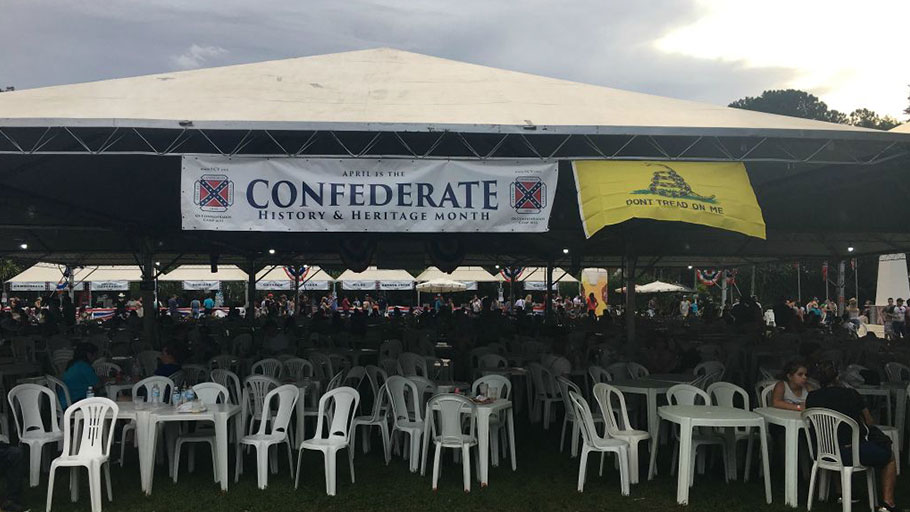 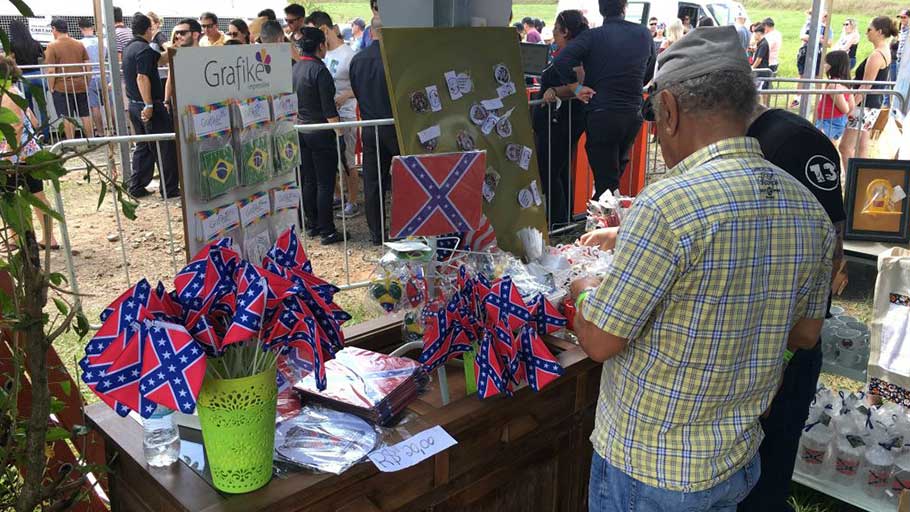 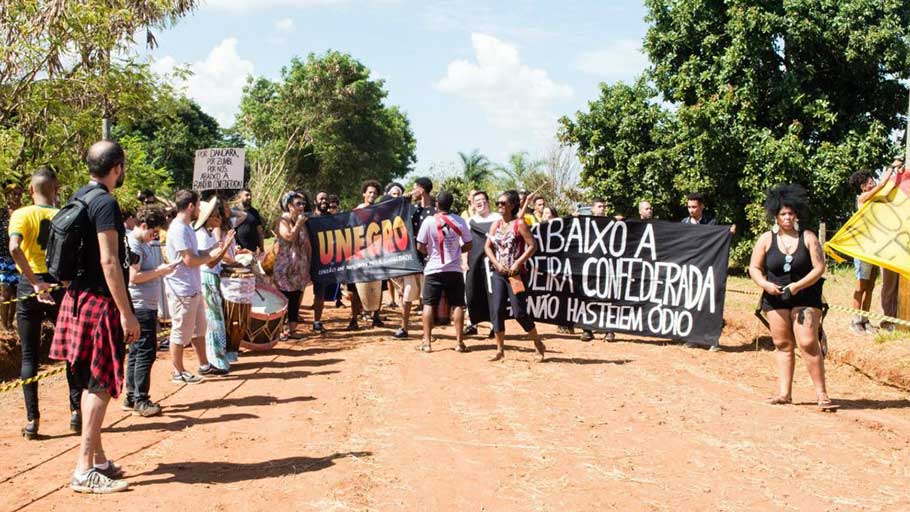 Activists protest the party organizer’s use of Confederate symbols. Sign reads “Down with the Confederate Flag. Don’t raise hate.” Courtesy of UNEGRO

Despite these historical records, many descendants of the Confederados dispute that slavery brought their forefathers to Brazil.

As early as the 1860s, Brazil was actively recruiting Southern American plantation owners, part of an immigration policy aimed at attracting Europeans, European-American and other “white” migrants. According to historians Cyrus and James Dawsey, who were born and raised near Confederado communities in São Paulo, Brazilian Emperor Dom Pedro II also promised cheap land to any American farmer who would come with a plow – a technology Brazil lacked.

Either way, thousands of white southerners made Brazil their new home after the Civil War. In São Paulo state, they established a somewhat closed and culturally homogeneous community that maintained its southern traditions for generations.

Brazil’s Confederados continued to speak English and to practice their Baptist, Methodist and Presbyterian faiths, introducing Protestantism to the Catholic country.

To this day, many Confederado descendants still describe the Civil War as the “War of Secession” – one of its original southern names.

And, since 1986, at the American Cemetery where their ancestors were laid to rest – as Protestants, they were barred from burial alongside Catholics – the Fraternity of American Descendants has held a low-profile, annual celebration of their southern heritage.

Racism and the legacy of Charlottesville in Brazil

That changed after the events in Charlottesville, Virginia, in August 2017 when an anti-racist protester Heather Heyer was murdered by a white supremacist at the “Unite the Right”march protesting the Virginia city’s planned removal of a statue of Confederate Gen. Robert E. Lee.

Racism is a persistent social problem in multicultural Brazil, where about half the population is of African descent. White Brazilians on average earn twice as much as black Brazilians, and two-thirds of all prisoners are black.

Efforts since 2010 to set racial quotas for university admissions and government jobs have been controversial. In a country where people use dozens of categories to identify their race, allegations of fraud and questions about who is and isn’t “black” have plagued the affirmative action system.

One month after the violence in Charlottesville, black activists in São Paulo organized a public debate with the Fraternity of American Descendants, which organizes the annual Confederate Party. The activists wanted to discuss its embrace of Confederate symbols.

“You can leave the flag behind,” said professor Claúdia Monteiro of UNEGRO, a member organization of Brazil’s national Unified Black Movement. “Black people can’t. The stigma [it represents] is in the color of our skin.” 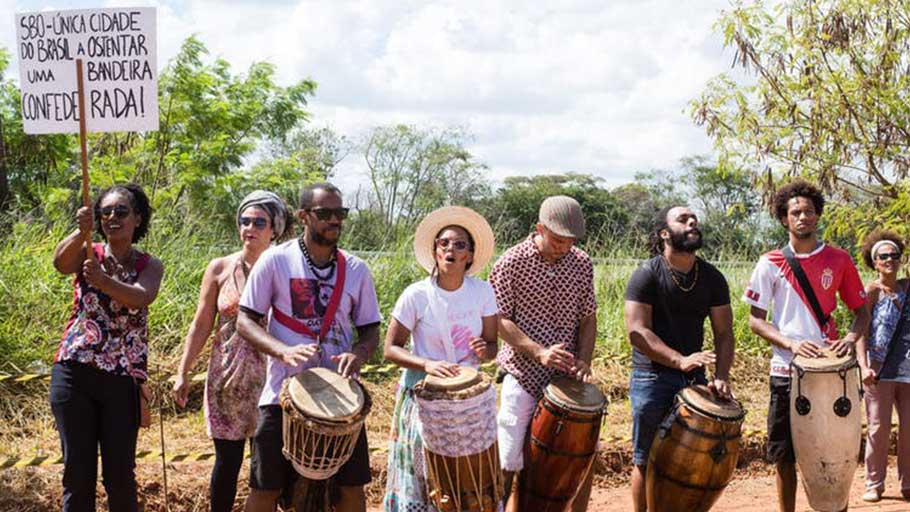 The Fraternity of American Descendants insists their group does not represent racism. In a 2018 bulletin, the organization stated that it “does not discriminate based on race, gender, color, age, religion or on any other basis.”

Marcelo Dodson, ex-president of the Fraternity of American Descendants, said in the 2017 debate that the Civil War was a battle not for slavery but for small government, low taxes, free commerce and states’ rights – a stance many American defenders of the Confederacy’s “lost cause” also maintain.

The 2017 dialogue between black activists and Confederados, which was filmed and posted on YouTube, did not resolve their disagreement.

This year, black activists outside the cemetery in Santa Bárbara d’Oeste carried the same message, saying “a lot of blood” was shed under the auspices of the Confederate flag. They also played drums and practiced capoeira, an Afro-Brazilian dance and martial art form, in a display of Brazil’s deep African roots.

A week after the Confederate Party, at least 100 civil society groups from across the country had signed a manifesto criticizing the event’s use of “symbols that elevate white supremacy” – a sign of growing Brazilian awareness about the complicated, controversial history of the American Confederacy.