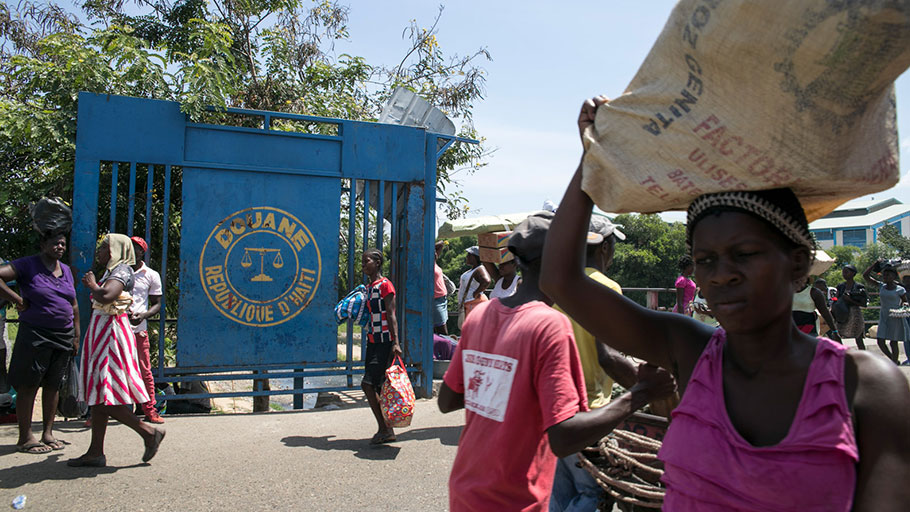 The Dominican Republic was home to the first black people in the Americas. So why has Europe’s oldest permanent settlement in the Americas turned its back on its African past?

Thick red-brick walls towered over me as I made my way inside the gated 16th-Century ruins of Hospital de San Nicolás de Bari in the heart of Santo Domingo’s Unesco-inscribed Colonial City. My guide, Maribel Nuñez, an activist and leader of Acción Afro-Dominicana, a non-profit organisation based here in the Dominican Republic’s capital, began telling the story of Micaela – “la negra del hospital”, or the black woman who lived here in the early 1500s and inspired then-Spanish governor Nicolás de Ovando to build this historic, first hospital in the Americas.

“There was a black woman curing the sick in her humble shack, which was located right where Hospital de Bari was built,” Nuñez said. “She used her knowledge of natural medicine to save lives.” 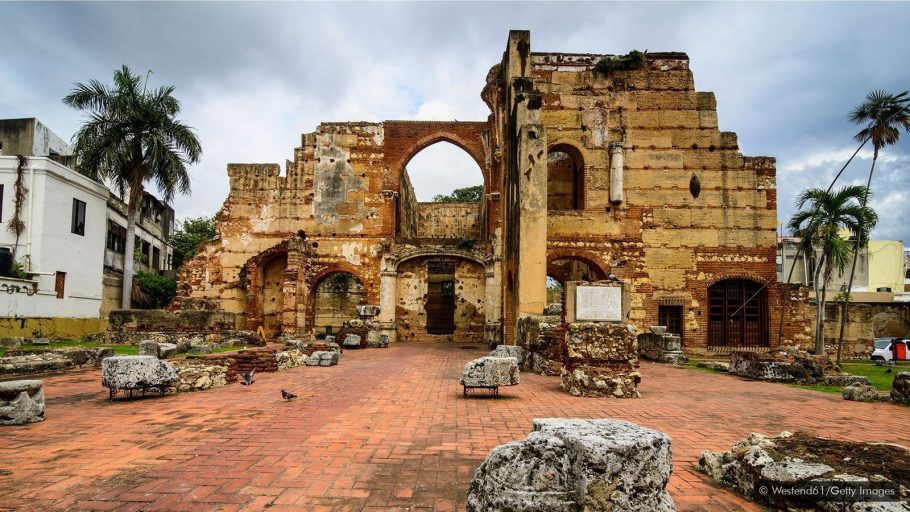 Santo Domingo’s Hospital de San Nicolás de Bari was the first hospital built in the Americas,
and it was inspired by a black woman.

The story of this faceless, nameless Afro-Dominican heroine – who Nuñez decided to call “Micaela” to humanise her story, since part of the dehumanisation of slavery was to erase people’s names – is documented in a 16th-Century manuscript that scholars at the City University of New York’s Dominican Studies Institute transcribed when researching the first African presence in the Dominican Republic. In a letter to the Spanish Crown about the new hospital, the Archbishop of Santo Domingo described its origins as linked to “a pious black woman who sheltered all the poor people she could and cured them as far as she was able to”.

Let there be a sign telling the story of this heroic black woman!

Outside the ruins, I glanced at the newly installed tourist plaque, whose description recognised the city’s former Spanish governor for its creation, but omitted Micaela – his black muse and the first person to establish and run a hospital in the Americas.

“Let’s honour Micaela and keep her memory alive!” Nuñez said. “Let the National Congress and the whole nation recognise her! Let there be a sign telling the story of this heroic black woman!”

She then turned on a portable loudspeaker and a traditional African chant known as Ogun Balenyó, dedicated to an African deity, began to echo off the surrounding ruins. Within seconds, a handful of Afro-Dominican women, including Nuñez, began dancing under the hot sun. They shook their hips, hands on their waists, as the circle grew wider at the foot of the old hospital. 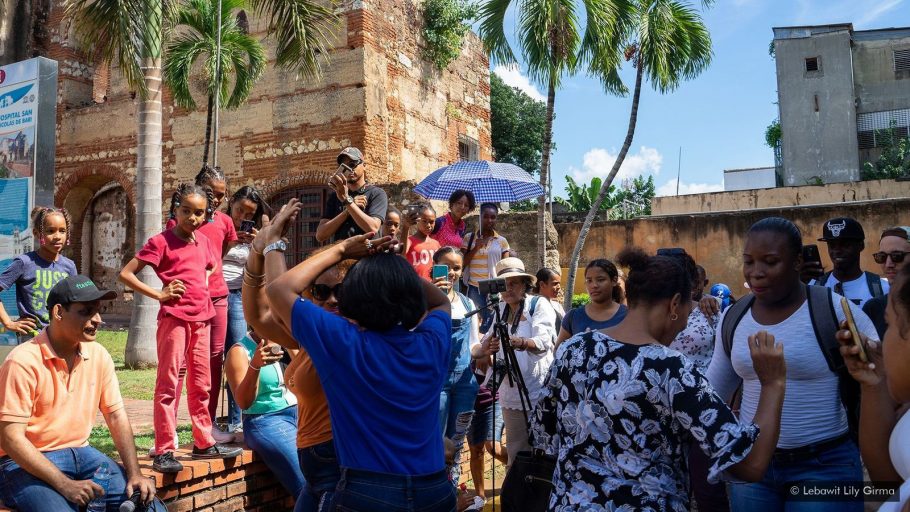 Today, many Dominicans of African descent can trace their lineage back to the “faceless” woman
who helped establish the hospital.

Few people realise that the Dominican Republic was home to the first black people in the Americas, who were initially brought here from present-day Senegal and The Gambia in the 1490s by Christopher Columbus. It was also where the Atlantic slave trade began in 1503 – 116 years before the first slaves arrived in the US Colonies. And, after Haiti, next door, it was the next nation to abolish African slavery in 1801.

The Dominican Republic was home to the first black people in the Americas, who were brought here by Christopher Columbus

The story of the country’s colonial past began where I stood that morning, and where the women were dancing in remembrance of their ancestor. In an effort to boost tourism, in 2014 the Colonial City experienced more than $100m in renovations over a three-year period. Building facades were repainted and restored, transforming into bistros, art galleries and shops. Yet, to this day, however, la Zona Colonial, as locals call it, reveals little about its African past. Visitors who flock here leave after learning a single version of the Dominican Republic’s history: that of Spain.

Touted as “a city of firsts”, the Colonial City is the oldest, permanent European urban settlement in the Americas, and there’s no doubt that this 10-block neighbourhood is a historical and architectural gem. The former walled city – its original fortified entrances remain standing – boasts the first paved roads and the first military fort, cathedral, convent and university built in the New World. Its narrow cobblestone streets are lined with Spanish-style colonial architecture, including pink, green and yellow pastel-coloured stone buildings, many of which retain their original metal doors, arched entrances and windows, stucco walls and wrought-iron balconies. Sprawling plazas remain punctuated with statues and busts of Spanish colonialists. 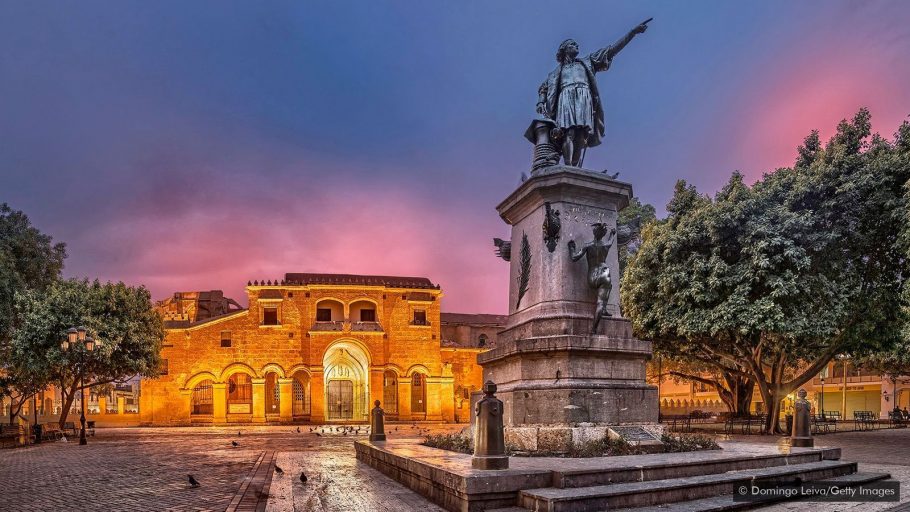 Santo Domingo is the oldest, permanent European urban settlement in the Americas, but many
visitors only see its Spanish past

The Spanish chose this location on the west bank of the Ozama River after two failed initial settlements on the island’s north coast. Columbus’ 1492 arrival and his pursuit of the island’s gold for the Spanish Crown had led to the enslavement and extermination of more than 400,000 indigenous Taino over a two-decade period. As the Spanish turned their attention from gold to sugarcane, they imported African slaves to work on the first sugarcane plantations in the New World. The city’s history is intertwined with more than 28 African tribes who were brought to the island over a period of three centuries. Yet walking around the Colonial City today, it’s easy to think that the Spanish were the only protagonists in Santo Domingo’s rich heritage and past.

We have to give our heroes faces. It’s about honouring ourselves

That’s why every year, Nuñez, with support from the University of Santo Domingo, and Afro-Dominican activist groups like Afros RD and Reconodi.do, plans a Jornada de Visibilización del Cimarronaje, or a “Maroon Awareness Tour” – a regional term referring to escaped African slaves who established free communities in secluded areas throughout the Caribbean. The two-day event, held each October, attracts university students, city residents and expats like me curious to learn of the city’s little-told African past. The tour stops at historical locations across Santo Domingo, revealing the contribution of Africans to the history of the Dominican Republic.

“We have to give our heroes faces,” Nuñez said. “It’s about honouring ourselves.” 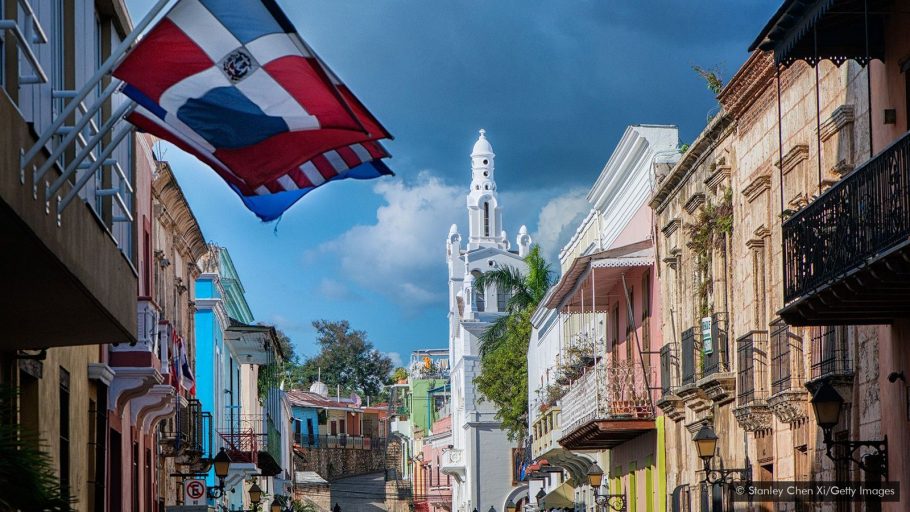 The Dominican Republic’s history is intertwined with more than 28 African tribes who were
brought to Santo Domingo as slaves.

After leaving the hospital, Nuñez took our group 24km south-west of Santo Domingo to the small town of Nigua, once the heart of the Spanish-run sugarcane plantations and mills. It’s also where, on 30 October 1796, 200 enslaved Africans led one of the island’s largest rebellions at the Ingenio Boca de Nigua mill.

They want to keep silencing what unfolded here

“Boca De Nigua was the most significant expression of the African resistance to slavery in the Spanish part of the island,” said Dario Solano, an Afro-Dominican history expert and native of Nigua, who sits on the Unesco Slavery Route’s Dominican Republic Committee. “[It was] the first rebellion that had a political dimension, with the aim of abolishing slavery and creating a government representing the ethnic diversity that existed on the island.”

Part of the strategic attack involved seizing the property’s ammunitions and burning the sugarcane fields and the plantation owner’s house. Nuñez revealed that the uprising’s leaders included a woman: Ana María, who was crowned “queen of the freed slaves” during the rebellion.

Although Boca de Nigua is mentioned in Unesco’s Places of Memory on the Slave Route in the Latin Caribbean project, the site’s significance remains “relatively unknown” on a national level, according to Solano. There’s no interpretive centre, no signs here – only ruins. “It’s paradoxical, for a country like the DR where tourism is fundamental,” he said. “There’s a muting; they want to keep silencing what unfolded here.” 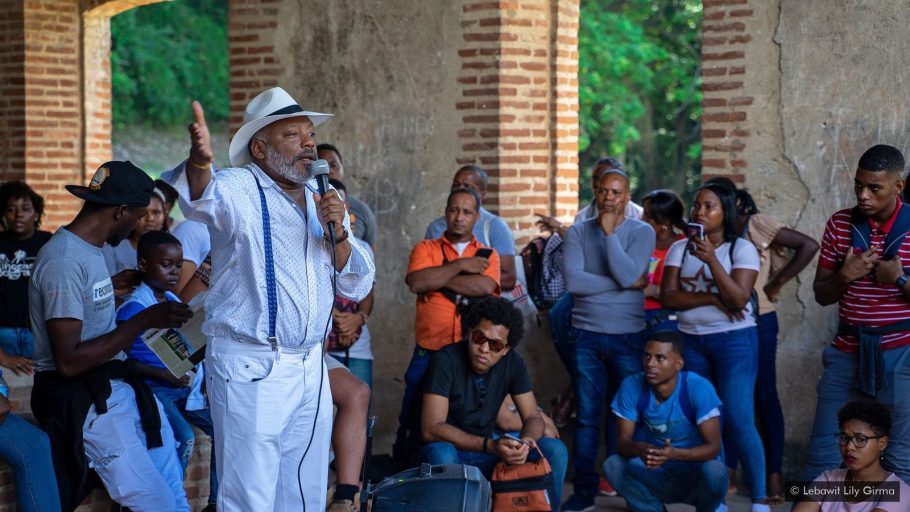 Solano is one of several prominent Dominicans working to illuminate the country’s often-overlooked
African origins.

Every year on 30 October, Solano hosts an official Festival del Cimarronaje, or “Maroon Festival” at this site, to commemorate Boca de Nigua’s rebellion. Nigua is the only town in the Dominican Republic that honours the abolition of slavery and the contribution of enslaved Africans to Dominican history. “This year, we’re going to formally propose to the national commission for Unesco and to the Ministry of Culture that Boca de Nigua be presented as a candidate for World Heritage Site status,” Solano said. Additional plans include designating 30 October as “Día de la Africanidad” (African Heritage Day) in Nigua, which Solano is certain will become a national event in the future.

While Boca de Nigua’s rebellion was inspired by Haiti’s revolution of 1791, history reveals that black resistance in the Americas actually began here in the Dominican Republic. The first sugarcane plantation rebellion took place in Nigua in 1522 in a mill owned by Christopher Columbus’ eldest son. “The men who rebelled were of the Wolof ethnic group, from the Senegambia [the former confederation in West Africa between Senegal and The Gambia],” Solano said. “In two years, we will commemorate the 500th anniversary of that first black rebellion in the New World.”

Another significant moment in the Dominican Republic’s resistance movement came courtesy of Juan Sebastian Lemba, who was a child when he was forcibly brought to Santo Domingo from present-day Congo in the early 16th Century. In 1532, Lemba escaped slavery and began a heroic 15-year journey across the Dominican Republic, growing an army of 200 to 400 Marooned Africans who joined him in liberating enslaved communities around the nation. Lemba’s statue – the only one nationwide that honours an African – stands outside the entrance to the Museum of the Dominican Man, a 15-minute drive east of the Colonial City. 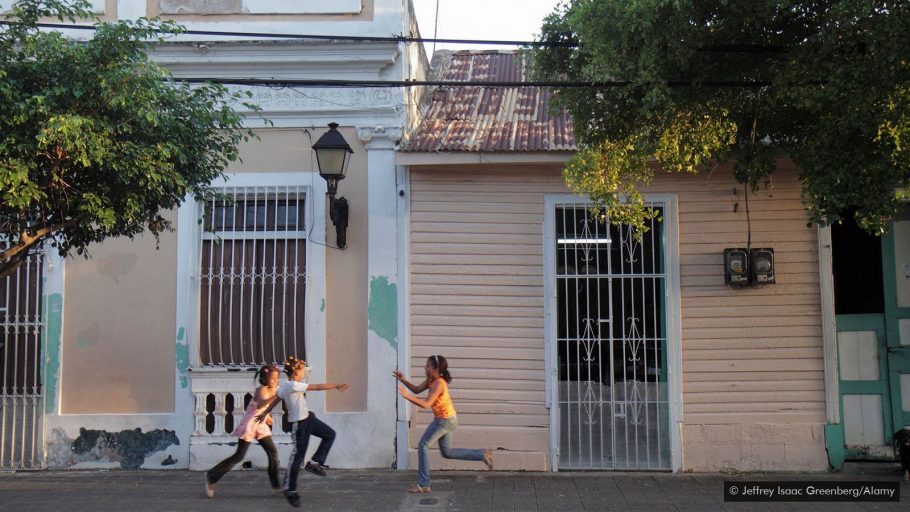 Today, the Dominican Republic is home to a melting pot of cultures reflecting its rich past.

The last stop on our Maroon Awareness Tour took us 20 minutes north of Santo Domingo to the town of Villa Mella, an area home to centuries-old brotherhoods formed by enslaved Africans starting in the 16th Century. Their descendants have preserved their ancestors’ drumming traditions and syncretic religions. Among these groups is Los Morenos de Villa Mella.

A turquoise-coloured wooden house with zinc roofing serves as the church and headquarters of Los Morenos. Entering the structure, I saw a group of three men at the altar, with tall, goat-skin covered drums tucked between their thighs and strapped to their lower waists with a thin rope string. They were surrounded by other community members and welcomed us with a spiritual chant and drumming. The sun was setting and a downpour followed, but the drums, tambourines and call and response overpowered the rain splattering overhead.

Our group took over the empty floor facing Los Morenos – waists bent, hips shaking and arms moving side to side. I asked Solano about the tall drums that I rarely heard in the city centre. 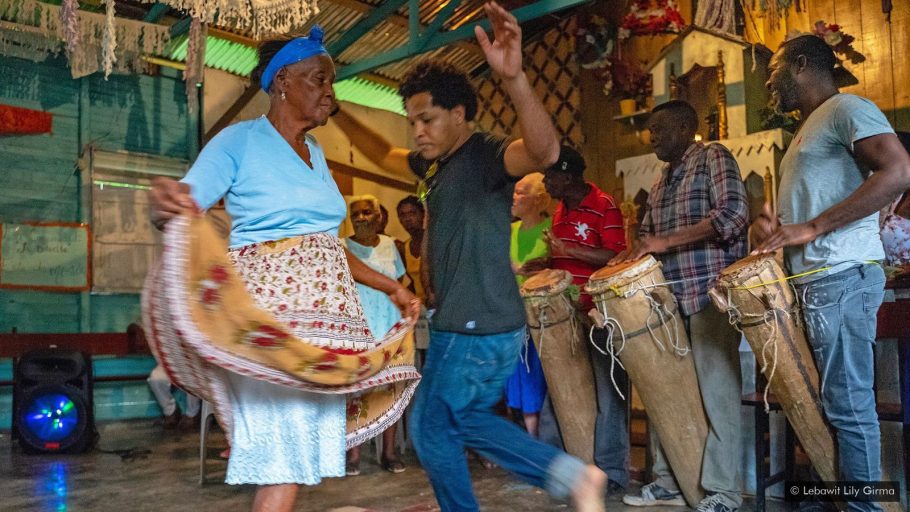 The DR still has many communities founded by Africans centuries ago that have preserved their
ancient musical traditions.

“That’s the palo or atabales – it’s our original musical expression in the Dominican Republic,” he said. “Merengue became official during the Trujillo era, like an imposition, but the African palo was already present. Palo is our national music.”