The Coronavirus Pandemic and the Demand for Reparations

You Are Here: Home » Blog » Reparations » The Coronavirus Pandemic and the Demand for Reparations 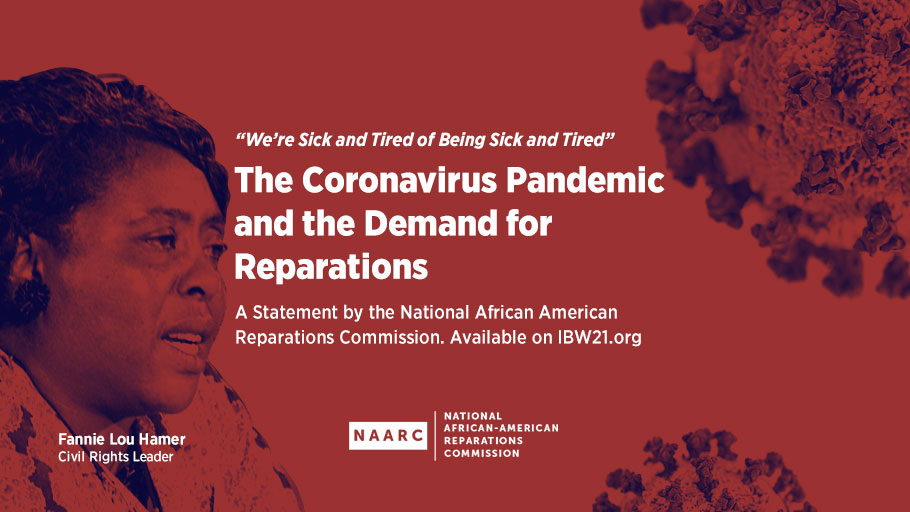 A Statement by the National African American Reparations Commission

The novel Coronavirus Pandemic has revealed the longstanding disparities in health conditions for African Americans in the United States. Chicago Mayor Lori Lightfoot said she was “shocked” and “disturbed” upon learning that black Chicagoans, who make up 30 percent of the city’s residents, accounted for 70 percent of the fatalities. “Those numbers take your breath away,” she declared. These statistics were “among the most shocking things I think I have seen as mayor.” However, the situation in Chicago corresponds with what is occurring in cities and states throughout the nation. Detroit, Milwaukee, New York, and Newark report similar disparities in rates of infections and fatalities from the Pandemic. The state of Louisiana has a population of 4.6 million, and California has 39.5 million residents. Yet, as of April 6, 2020, California has reported less than 500 deaths from Covid-19, while Louisiana has over 850. African Americans are 34 percent of Louisiana’s population, but are 70 percent of the fatalities, in a state known for its unwillingness to prioritize health and welfare benefits for its residents.

Many political leaders have expressed their dismay about the health conditions that underlie these statistics, yet anyone at all informed about health disparities for African Americans would not be surprised. The Coronavirus Pandemic has brought into bold display disparities that have existed and remained unaddressed since the founding of the Republic. African Americans have complained bitterly about their lack of access to adequate health care for decades. The National African American Reparations Commission and other champions of reparatory justice believe resources to eliminate health disparities must be a central component of reparations for African Americans. Click here to see list of NAARC Commissioners. 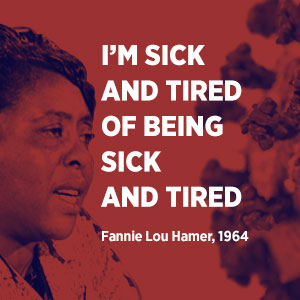 “I’m Sick and Tired of Being Sick and Tired” is the poignant phrase made famous by the great civil rights activist, Fannie Lou Hamer. It not only describes the personal health challenges she faced throughout her life in Mississippi, but also conveys the past and current health conditions facing far too many African Americans. Under the slaveholders’ regime and in the era of Jim Crow, the high child and adult mortality rates, compared to white Americans, was attributed to the poor diets and lack of access to adequate health facilities. After the Civil War, just as the public schooling provided African Americans was “usually separate” and “rarely equal,” this was the case with health services as well. White physicians and other health professionals often refused to treat African Americans as patients; there were few black doctors and nurses, and even fewer hospitals. Harriet Washington’s prizewinning book on Medical Apartheid (2007) documented African Americans’ position at the lowest rung on the health care ladder in the United States from the eighteenth century, which meant that they were much more likely than whites to suffer and die from preventable diseases, and when treated, they usually ended up in under-resourced, segregated health facilities.

Historically, poverty, housing discrimination, unemployment, food deserts and mass incarceration are also chronic conditions that make vulnerable populations susceptible to dangerously high risks for infection and deaths by viruses like COVID-19. African American children suffer disproportionately from childhood asthma and high rates of obesity. Some medical researchers have used the phrase “weathering” to describe the inordinate toll that everyday trauma and discrimination has taken on African Americans’ physical and mental well-being. And that includes the impact of the prejudice and inadequate treatment they face when encountering medical professionals.

Moreover, Black psychiatrists and psychologists are increasingly citing data which indicates that the intergenerational oppression of people of African descent in the U.S. has resulted in intergenerational damage to our DNA.  Taking note of this data, in an article in the Chicago Crusader, Kamm Howard, National Co-Chairperson of N’COBRA writes: “It is the DNA damage of enslavement and its aftermath that is the pre-existing state that has led to these ‘pre-existing illnesses’ that gives COVID-19 easy targets for death.”

Health mitigation policies designed to protect the public are inadequate because, in many instances, African Americans work in jobs that prevent them from “sheltering in place.” They are overrepresented in areas now classified as “essential” e.g., bus drivers, maintenance workers, food, dietary, housekeeping, hospital support staff and delivery people – that require them to interact with customers and clientele, thus increasing the likelihood of direct exposure to the deadly virus. Many are being forced to work without adequate Personal Protective Equipment (PPE) increasing the risk of infection for them and their families. The fact that the nation’s correction facilities are overpopulated with Black and Brown men, women, and children due to the racist practices of the criminal (in)justice system increases the likelihood of spreading the Coronavirus. And, there is general agreement that when African Americans show up at emergency rooms, even during the current Pandemic, regardless of their symptoms, they are less likely to be recommended for hospitalization.

This disaster is compounded by the fact that the cities where large numbers of African Americans live such as Detroit, Chicago and New Orleans, which have been designated “epicenters” for COVID-19, lack adequate facilities or resources for testing, treatment, tracking and tracing. Moreover, the absence of a coordinated federal response by the criminally negligent and incompetent Trump administration has deadly consequences in marginalized Black communities. Like Katrina, black bodies are piling up exposing again the raw, naked consequences of longstanding health and social-economic disparities in this country; gross, immoral and intolerable inequities that urgently cry-out for reparations for African Americans.

The National African American Reparations Commission’s (NAARC) 10 Point Reparations Program directly addresses the pressing need for appropriate remedies to eradicate the devastating health disparities and inequities we are witnessing with the Coronavirus Pandemic. Point # 5 of the Program reads as follows:

Resources for the Health, Wellness and Healing of Black Families and Communities

The intergenerational psycho-cultural, mental, spiritual and physical damages of Post Traumatic Slavery Syndrome, the daily toll of racism on individuals, families and communities and the debilitating effects of chronic health disparities resulting from structural/institutional racism are well documented by leading Black psychiatrists, psychologists and physicians.  Moreover, many public hospitals and medical facilities that traditionally served Black communities have either been forced to close or are ill-equipped to offer a full range of services for lack of adequate funding. Therefore, we demand:

Under the leadership of Congresswoman Sheila Jackson Lee, HR-40, the Congressional bill that will establish a Commission to study Reparations Proposals for African Americans is gaining momentum. It includes provisions for implementing specific measures aimed at mitigating the disparities in health, education, employment and housing conditions for African Americans. The Coronavirus Pandemic has made crystal clear the urgency of addressing conditions that have been allowed to fester for far too long; conditions that threaten the well-being of present and future generations of African Americans and American society as well. Therefore, it is in the best interest of all people of conscience and good will to seize this tragic moment to fight for reparatory justice.

People of African descent in America are “sick and tired of being sick and tired” of the death and destruction of Black families and communities in a society infected by racialized Capitalism, white supremacy and structural/institutionalized racism. If America is to ever become “a more perfect union,” reparations to repair the injuries inflicted on people of African descent in this country from enslavement to generations of racially exclusionary policies and practices must be repaired! The time for America to act in now!

After wrecking the Gulf, Big Oil is worsening the COVID-19 crisis

After wrecking the Gulf, Big Oil is worsening the COVID-19 crisis
We Need Your Support — Donate, Share, Sign-Up Ways to Support