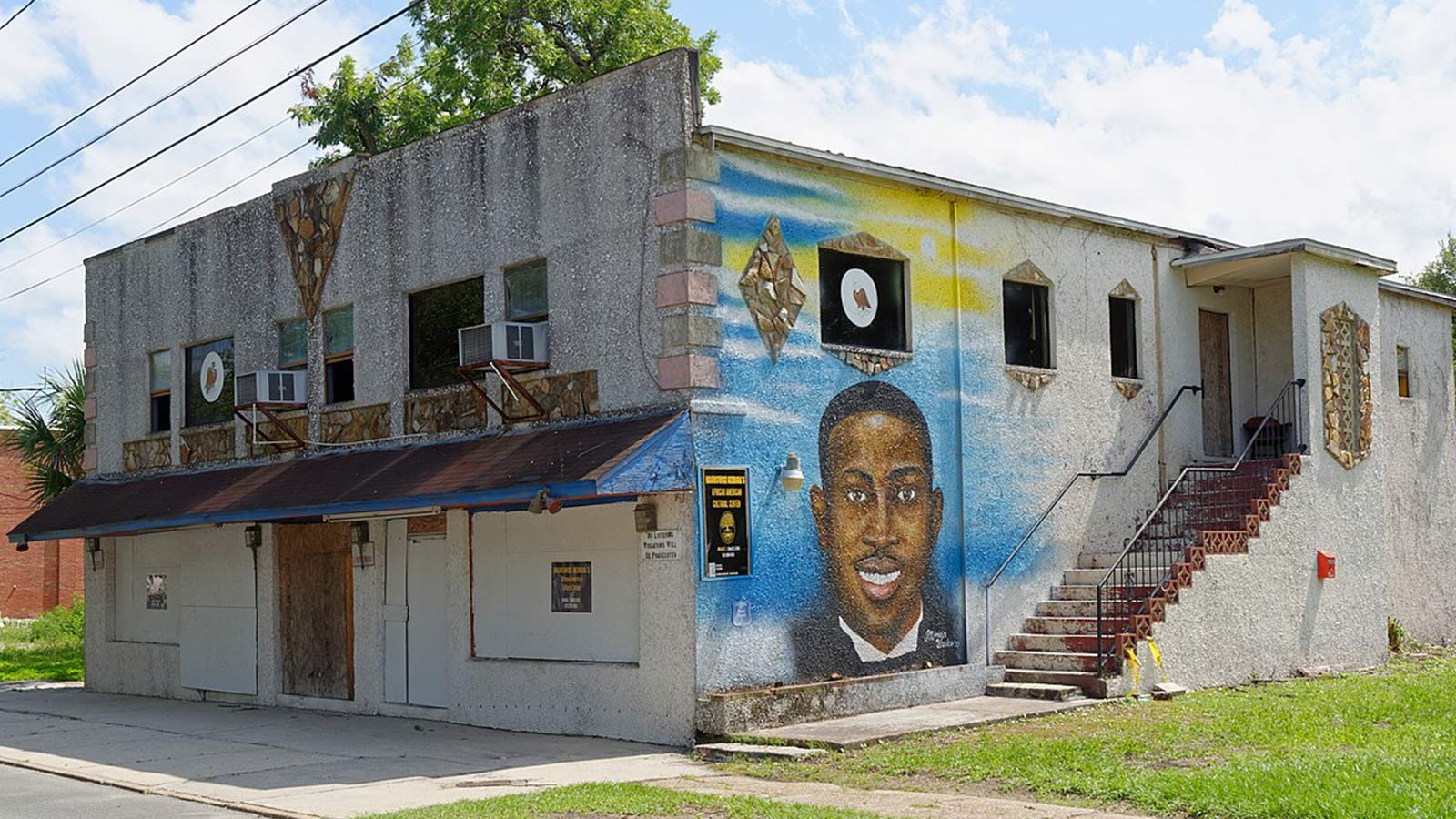 You Are Here: Home » Blog » Commentaries/Opinions » Citizen’s arrest law at center of trial of Arbery’s killers originated in slavery

Jury selection has begun for the trial of Gregory and Travis McMichael and William “Roddie” Bryan Jr., the three white men accused of murdering Ahmaud Arbery, an unarmed twenty-five year old African American man in February 2020, outside of Brunswick, Georgia. The three face multiple charges including malice and felony murder. According to the Georgia State Legal Code, a conviction for malice murder requires murderous intent or forethought. A conviction on the charge of felony murder means the murder was committed, whether intentionally or not, during the course of another crime. The penalty for both crimes can be death, imprisonment for life without parole, or imprisonment for life with the possibility of parole.

The defense is expected to argue that the assault on Ahmaud Arbery was legitimate under Georgia’s Citizens Arrest law, which was applicable at the time, and that Arbery’s death was caused by his physical resistance to a legal action and was therefore self-defense on the part of the three white men.

Arbery was jogging on a rural road when the armed white men approached him in two vehicles. They claim his behavior was suspicious, but they had not witnessed any criminal behavior on his part, nor had they notified the police prior to stopping him, which should negate a Citizen’s Arrest defense, unless of course, jogging while Black is itself legal grounds for a Black man to be stopped by white vigilantes. Without the claim of Citizen’s Arrest, the three men were simply assaulting Arbery, and he was the one to legitimately defend himself, not them. A thousand potential jurors from Glynn County in coastal Georgia were summoned for questioning by defense and prosecution attorneys. It remains to be seen whether a Georgia panel that includes white jurors will convict three white men of murdering an African American.

The Georgia Citizen’s Arrest law, which was repealed in May 2021, dated to 1863 during the American Civil War. Its last iteration, passed by the Georgia legislature in 2010 and signed into law, stated “A private person may arrest an offender if the offense is committed in his presence or within his immediate knowledge. If the offense is a felony and the offender is escaping or attempting to escape, a private person may arrest him upon reasonable and probable grounds of suspicion.” A private individual who makes a “citizen’s arrest” is instructed “without any unnecessary delay” to “take the person arrested before a judicial officer . . . or deliver the person and all effects removed from him to a peace officer of this state.” Nearly every state in the United States currently permits citizen arrests in one form or another.

Georgia’s state laws were formally codified in 1861 by Thomas Cobb, a lawyer and slaveholder. It was the first formal codification of state common law in the United States. In the original code, African Americans were assumed to be enslaved unless they could prove their free status. Citizen’s Arrest statues were added to the Law Code of Georgia in 1863. The Law Code of Georgia has been revised a number of times during the last 150 plus years, however, the Civil War era Citizen’s Arrest provision remained in effect until after Arbery’s death.

The idea of citizen’s arrest was imported to the British North American colonies along with English common law and probably dates back to the European Middle Ages and feudalism. According to the 1285 Statute of Winchester, private citizens were permitted to arrest someone who committed a crime and were, when alerted, required to assist in the apprehension of someone suspected of criminal behavior. Starting at the end of the 18th century, British and American courts and legislatures established that a private citizen who perpetrated a citizen’s arrest was legally to blame and liable for damages if it was demonstrated that the person seized was not actually engaged in a criminal act.

Citizen’s arrest in the United States has a long history and a deep connection to the enslavement of African Americans. In the thirteen British colonies that became the United States, the idea of citizen’s arrest frequently accompanied mob violence and the murder of the accused, particularly enslaved Africans. In 1712 and 1741 in New York City, enslaved Africans suspected of plotting rebellion, were publicly and gruesomely executed. After the 1739 Stono Rebellion by between 50 and 100 enslaved Africans in coastal South Carolina, the rebels were summarily executed and South Carolina passed new restrictions to control the Black population. Earlier, fearing the possibility of slave uprisings, the South Carolina assembly approved legislation requiring all white men to carry firearms when they attended church on Sundays. Any adult white male who did not comply with the law was fined. White vigilantism and restrictive laws generally increased after suspected or actual slave plots.

In a precursor to citizen’s arrest laws, fugitive slave notices in newspapers across the British colonies offered rewards to private bounty hunters for the capture and return of escaped enslaved Africans. In 1769, Thomas Jefferson, the principal author of the Declaration of Independence and a future President of the United States, advertised in the Virginia Gazette for the capture and return of “Albemarle, A Mulatto slave called Sandy, about 35 years of age.” Jefferson offered a 40 shillings reward if Albemarle was captured locally, 4 pounds if he was captured elsewhere in Virginia, and 10 pounds if Albemarle had made it to another colony.

In 1776, one the accusations made against the King of England in the Declaration of Independence was that he had “excited domestic insurrections amongst us,” including the November 1775 decree by Virginia Governor Lord Dunmore promising freedom to any enslaved African that supported British efforts to suppress the rebellion.

Article IV, Section 2, Clause 3 of the Constitution of the United States established the legal basis for anti-African, anti-slave vigilantism and violence, declaring that “No Person held to Service or Labour in one State, under the Laws thereof, escaping into another, shall, in Consequence of any Law or Regulation therein, be discharged from such Service or Labour, but shall be delivered up on Claim of the Party to whom such Service or Labour may be due.” The first federal Fugitive Slave Law in 1793 authorized local governments, but not federal authorities, to capture and return to slave holders any self-emancipated freedom-seekers who had escaped from bondage. Local authorities were also empowered to fine anyone who assisted escapees. Under this act, Frederick Kitt, acting as the agent for President George Washington, posted fugitive slave notices in a number of newspapers, offering a ten dollar reward for the capture and return of “ONEY JUDGE, a light Mulatto girl, much freckled” who had “absconded from the household of the President of the United States.”

In 1842 the United States Supreme Court unanimously upheld the constitutionality of the fugitive slave act and overturned charges in Pennsylvania against Edward Prigg, a slavecatcher, convicted of kidnapping and returning to slavery a woman who had earlier escaped from enslavement in Maryland. Because enforcement of the 1793 law was left to local authorities, it was rarely implemented in Northern states that had abolished slavery. The 1850 Fugitive Slave Act required Northerners, ostensibly including free Blacks, to aid in the recapture of escaped slaves or face heavy fines and denied freedom-seekers the right to due process. Both laws remained in effective until they were repealed by Congress in 1864 as a Civil War measure.

When the citizen’s arrest provision was added to the Georgia Law Code in 1863, slavery and law enforcement in Georgia were in serious disarray. Georgia units in the Confederate army were primarily stationed in Virginia and enslaved Africans were fleeing plantations to join approaching Union forces. The code revision essentially empowered any white Georgian to take steps to keep the enslaved Black population under control.

Southern citizen’s arrest vigilantism was even worse after the end of the Civil War as former slaveholders and the white population in general tried to terrorize African Americans into accepting a new form of subservience. Citizen’s arrest supported Ku Klux Klan violence against Black Georgians, and in 1868 there were over 300 reported cases of the Klan murdering or attempting to murder Georgia’s Black citizens. The Fulton County Remembrance Coalition lists almost 600 documented lynchings in the state of Georgia between 1877 and 1950.

Ashley M. Jones, the new poet laureate of Alabama, has a couplet in her poem, All Y’all Really from Alabama, that powerfully captures the racism imbedded in Citizen’s Arrest and much of the American legal system. “We hold these truths like dark snuff in our jaw, Black oppression’s not happenstance; it’s law.”

Alan Singer is a historian and professor in the Hofstra University Department of Teaching, Learning and Technology. He is the author of New York’s Grand Emancipation Jubilee: Essays on Slavery, Resistance, Abolition, Teaching, and Historical Memory (SUNY Press, 2018).