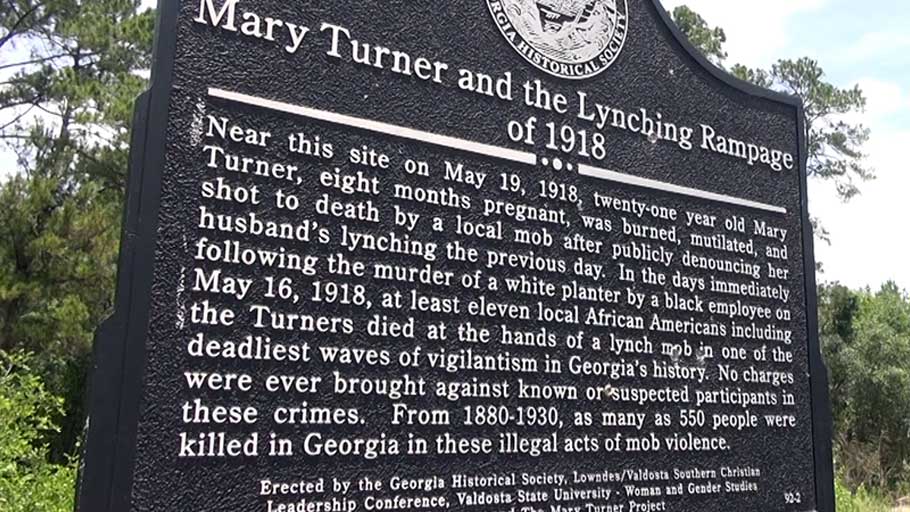 Mary Turner was lynched on May 19. 1918 because she dared raise her voice. Her husband, Hayes Turner, was among 13 people lynched in two weeks in and around Valdosta, Georgia. The lynchings took place because one brutal white man, who was known to abuse workers so severely that he was only able to attract workers by getting them through the convict labor system, beat the wrong Black man too many times. Sidney Johnson shot and killed the brutal Hampton Smith, and in response the white people of the area started apprehending, beating, and lynching Black men believed to be associated with Sidney Johnson (even though many of those lynched were not). Mary Turner was nineteen years old and eight months pregnant, and her husband was lynched. She openly denounced the lynchings and threatened to have the men who killed her husband arrested.

After Mary Turner’s lynching, an investigative reporter stated that Turner was lynched because she made “unwise remarks.” The mob, it was reported, “took exception to her remarks as well as her attitude.” Her “defiant voice” was the impetus for mob retaliation. The mob action was particularly brutal. Mary Turner was hung by her ankles, lowered face down from a tree. Her clothing was set afire while she was alive. When she was dead, one of the mobsters slit her belly open, and her fetus came out, landing in a pool of blood. Then the sick and brutal white men crushed the infant’s skull.

Black women have been, too often, cautioned to be silent, to be demure, not to rock the boat. And Mary Turner’s lynching reminds us that mouthy Black women often suffer the consequence of their vocality. The 45th President of the United States stands in the shadow of the men who silenced Mary Turner with his vicious and vile attacks on Black women. From Congresswoman Maxine Waters to Congresswoman Fredricka Whitfield, to journalists April Ryan, Abby Phillips and Yamiche Alcindor, this man neither has the grace or the gravitas to interact with these brilliant and amazing Black women. Now, here he goes again, spewing his filth. He suggested that four fresh women members of Congress, the self-described “Squad” of Congresswomen Ayanna Pressley (D-MA), Ilhan Omar (D-MN), Rashida Tlaib (D-MI) and Alexandria Ocasio-Cortez, “go back to where they came from.” He amplified and attacked the women so vociferously (and inaccurately, but that’s another story) that one of the mobs, I mean crowds, that attended one of his rallies began to chant “Send her home.”

Three of the four members of the Squad were born in the United States. Ilhan Omar is a naturalized citizen and member of Congress. The President is out of line and out of order, but that’s nothing new. What is new is that he’s stopped dog-whistling his racism and now just shouts it out. And sometimes retreats. Five days after his offensive tweets, he claims he did not incite his crowd and instead tried to shut the racist chants down. Films of the mob at his rally shows otherwise.

Ilhan Omar and the other members of the Squad have had their lives threatened, sometimes by identifiable Trump supporters. We can’t expect 45 to repudiate the threats. After all, he thought there were “good people on both sides” in Charlottesville when Heather Heyer was killed. So we aren’t surprised that he let the vitriolic chants of “send her back” to go on for more than 13 seconds before they died down naturally (he did nothing to stop them, nor did he comment at the time).

Like the white men who lynched Mary Turner, our President “takes exception to her remarks as well as her attitude.” Without accusing Mr. Trump of lynching, one can accuse Mr. Trump of being a racist and hostile to Black women. Ilhan Omer isn’t the first he went after, and she won’t be the last.

Ilhan Omar, Ayanna Pressley, Alexandria Ocasio-Cortez, and Rashida Tlaib had better not shut up. They need to continue to raise their loud, discordant, disruptive voices to make our country a better, more inclusive nation. They must raise their voices because Ida B. Wells did, and she paid the price. Because Shirley Chisholm did, and she paid the price. Because Barbara Lee did and got death threats as a result. Because Maxine Waters does, despite attacks and ridicule. Mary Turner chafed at her husband’s lynching, and she paid the ultimate price. But the story of her lynching should strengthen us all. We must surround the Squad with support. We need more mouthy women to challenge patriarchal predatory white supremacy. There must not be another Mary Turner.