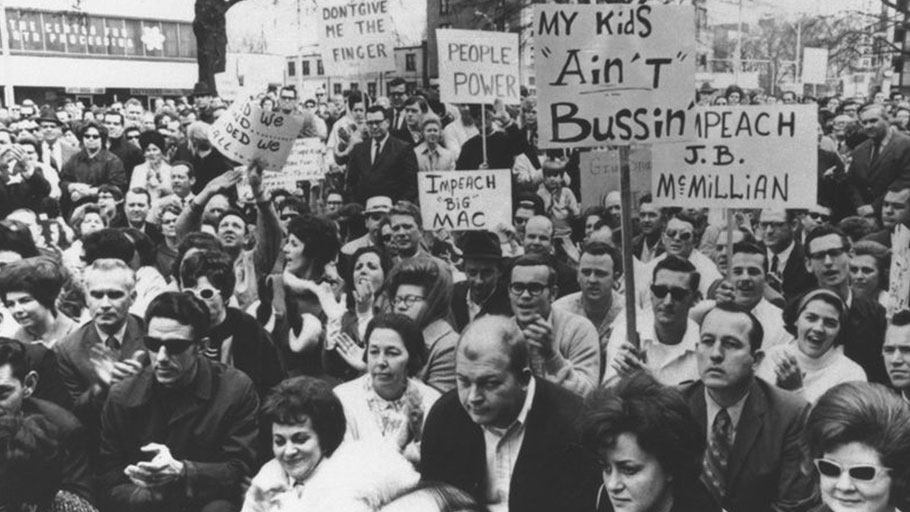 On Busing, Joe Biden, and the ‘Pervasiveness of White Backlash to School Desegregation’

You Are Here: Home » Blog » Commentaries/Opinions » On Busing, Joe Biden, and the ‘Pervasiveness of White Backlash to School Desegregation’

The most widely discussed moment from last week’s Democratic primary debates was Kamala Harris’s pointed critique of Joe Biden’s defense of southern segregationists and his stance toward busing. That encounter—in which Harris shared her own story of being a young girl bused from her working-class neighborhood on the majority–black side of town to a predominantly white school in Berkeley Hills, and in which Biden appeared visibly flustered and defensive—has set off a round of media coverage and conversation about desegregation efforts more broadly and busing in particular.

One narrative that has stood out is that of busing as a “failed” strategy. “Busing has largely been seen as a failed effort,” wrote the New York Times in a piece that delved into Berkeley’s integration plan. It is, in the words of a Salon headline, “a semi-failed social experiment.” Those who believe this will point to the fact that schools today have largely resegregated after integration reached its high point in the late 1980s. And yet, is that a failure of the policy itself or is that the result of revanchist policies enacted after the successes of school integration? Those who have spent decades researching and writing about desegregation efforts largely agree with the latter.

A more realistic accounting of busing would have to take into consideration the overwhelming white backlash to school integration, which became synonymous with the coded phrase “forced busing” in the 1950s. To understand more of this history, Jezebel reached out to Brett Gadsden, a history professor at Northwestern University and the author of Between North and South: Delaware, Desegregation, and the Myth of American Sectionalism. Jezebel spoke with Gadsden about how to understand Biden’s position as part of white backlash to desegregation efforts, the ongoing resegregation of American life, and the reality that, as he put it, “racial segregation is the norm, not the exception.”

Our conversation has been condensed and lightly edited for clarity.

JEZEBEL: You’ve studied the fight for school desegregation in Delaware. What did that look like in the early 1970s when Joe Biden was coming up as a senator?

BRETT GADSDEN: In the early 1970s, civil rights activists filed a lawsuit against the state, contending that the racial segregation in Wilmington-areas schools was a function of state-sponsored education and housing policies, and the courts found that argument compelling. And through a succession of decisions, they arrived at the conclusion that the appropriate remedy was a two-way, inter-district busing plan that would transport essentially white kids from the suburbs into city schools and black kids from the city into suburban schools to integrate the metropolitan area public school systems. And this decision provoked a wave of consternation among particularly white suburbanites who feared that black students would bring with them all kinds of disciplinary problems and low academic standards that would undermine the schools and those communities. And they didn’t want to send their kids into the city. I think many perceived that the schools in Wilmington city had been in decline for some time and wanted to essentially insulate their children from that problem.

What do you make of Biden’s role at the time? Based on comments he made in the ’70s, he seemed to align fairly tightly with those white suburban parents opposed to desegregation through busing. I’m thinking specifically of when he said “the real problem with busing” is that “you take people who aren’t racist, people who are good citizens, who believe in equal education and opportunity, and you stunt their children’s intellectual growth by busing them to an inferior school… and you’re going to fill them with hatred.”

Biden was a freshman senator at the time, and he was channeling the sentiments of a great number of his constituents. And I think that’s the important context for his anti-busing work in the Senate, that Biden was right in step with many of his white constituents and whites across the nation who were facing the possibility of court-ordered school desegregation mandates.

Biden was right in step with many of his white constituents and whites across the nation who were facing the possibility of court-ordered school desegregation mandates.

What was your reaction when you heard Biden defend his work with segregationists and his anti-busing record?

I think politically, it makes no sense. Why would you resurrect the memory of these unreconstructed Southern Democrats? Kamala Harris is right. Their politics were reprehensible, and if they’d won the day, many of the candidates up on that stage wouldn’t have been there.

But that Joe Biden, who imagines himself as a kind of liberal Democrat in the 1970s, could find common cause with conservative Democrats or Republicans around the issue of busing, is more indicative of where the center of public opinion was on this matter. That in opposition to busing, liberals and conservatives, Democrats and Republicans, found common cause. And I think that tells us a great deal about where the state of race relations was then and is now.

Even today, there continues to be a lot of opposition to busing policies, and to desegregation policies in general.

In many ways we still live in conservative racial times. More broadly, if we think about American education, racial segregation is the norm—not the exception. And school desegregation requires considerable amounts of energy to impose and maintain. And when you remove that [legal] impetus for that imperative, then you collapse back into segregated schools.

I think that on the other side of the issue, civil rights activists and education reformers haven’t featured school desegregation as a central feature or central part of their reform agendas. And so there’s just not much of an appetite right now for school desegregation, or any more school desegregation than exists already. And in many communities, we see the opposite trend, towards dramatic forms of resegregation on the basis of race and class and language.

That’s something that doesn’t get enough attention, which is the way that American life has been resegregated in recent decades. And it’s not just our school system, but it’s so many aspects of our lives. Do you wish that took up more of the conversation?

Absolutely. I think wherever African Americans or people of color have been racially segregated across time and space, their political, economic, and social standing is diminished or has been diminished. Separate has always been unequal, when we think about schools or we think about residential patterns and the kind of resources that people of color have had available to them you when compared to whites.

Separate has always been unequal, when we think about schools or we think about residential patterns and the kind of resources that people of color have had available to them you when compared to whites.

Since the Nixon administration, the courts have turned their back on desegregation. Combine that with white grassroots opposition to busing and politicians willingness to bow to the prerogatives of those folks, and I think that helps to explain why the movement to desegregate our nation’s schools is largely stalled and resegregation is occurring in many communities.

It’s people moving out of certain school districts and into whiter, wealthier ones. It’s a question of poverty and income inequality.

All of that. And the government’s hand is in all of that.

There has been some debate around busing as a particular tool and strategy to combat segregation. Does it work, does it not work? Do people support it, do people not? What is your view?

School desegregation and more specifically busing has never been, in and of itself, a panacea. In and of itself, it has proven inadequate to address the problem of the considerable education gaps between white students and students of color. But I think it’s also the case that wherever students of color are segregated, those students do not have the same access to the educational resources that white students have who often live in neighboring communities. And we see that in pretty much every major metropolitan area in the country.

And that’s the challenge that needs to be put to opponents of school desegregation. Critics need to ask them, if you oppose school desegregation, how do you then propose to address education gaps? Because none of the prescriptions that have been offered across time and space have proved adequate.

In reading histories of anti-busing activists, it stood out to me that many of these white activists described it as their civil rights movement.

It’s ironic that white suburbanites in the 1970s actually embraced a lot of the language of civil rights and a rights-based rationale to resist school desegregation in the 1970s. And in that sense, they don’t look the same way as southerners in the Jim Crow era. They’re not arguing that African Americans are biologically inferior and thus need to be segregated from their white kids, but they’re making variations of the kind of states rights argument that the federal government doesn’t need to come into our communities and tell us how to organize our people’s policies. They’re making arguments that these black students who, many of whom come from working-class and poor backgrounds, are going to undermine the educational standards of the schools in their communities. And they’re concerned about their property values, because property values are so tied up in the quality of schools and communities.

Some of the motivations are different but the end result is the same.

It seems pretty apparent that a lot of people in this country today continue to be perfectly fine with the reality of segregation. And I think what this conversation is really underscoring is that for all the brouhaha over Biden, the unfortunate truth is that his views are in step with a lot of Americans.

You know, no one else on those two debate stages has really picked up the school desegregation and busing ball and run with it, to get traction with voters and donors. No one’s done that.

It’s difficult to imagine that the courts today would mandate an expansive busing remedy. When faced with the facts that our schools are really racially segregated, I think that any politician who embraced school desegregation as a central feature of their platform would be committing political suicide.