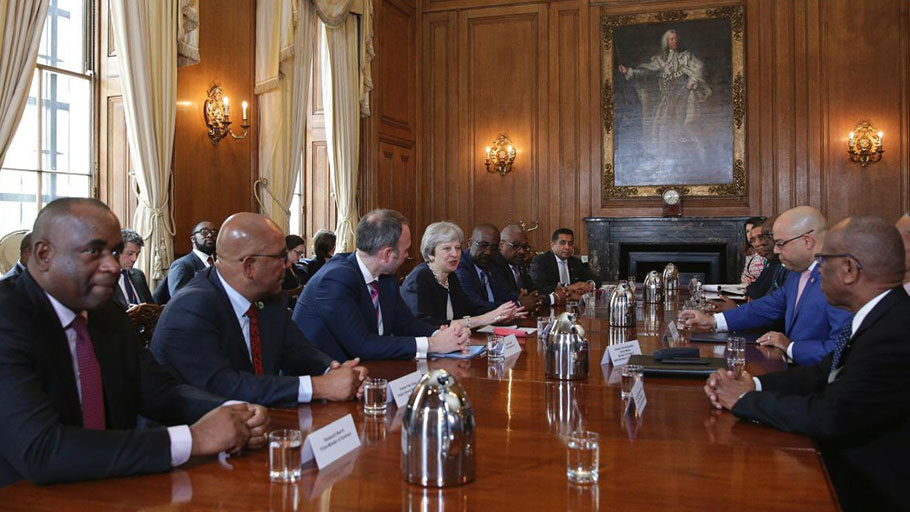 You Are Here: Home » Blog » Commentaries/Opinions » Windrush: Brexit and Blackxit

Caribbean Prime Ministers witnessed it first-hand. They were gathered in England as a Commonwealth when Prime Minister May tried to take the sails out of the Windrush.

They spoke of the crime of citizenship denied; they demanded justice for all West Indians. Prime Minister Holness spoke to the press and held the centre for the Caribbean. There was vexation in his eyes but his upper lip was stiff with the resolve of a seasoned statesman.

The season of injustice against injured West Indians seemed unending. Long have they been detached from ancestral freedom and detained in the dungeon of imperial Britain

The slave ship Zong in 1781 came from Africa to Jamaica laden with its crime against humanity. The cargo ship Empire Windrush laden with Jamaicans sailed to England in 1948 with the legacy of the crime. The cycle of enslaved labour, and its legacy, are now before the world for adjudication.

The British had grabbed with guns and cannons over two million enchained and enslaved Africans for shipment to Caribbean plantations.

With this army of enchained ‘free’ labour, and navies commanding the waters, Britain took the lion share of Caribbean wealth. Enriched and empowered with surplus capital, and skilled in the deployment of the fiscal and financial, they went about the task of transforming the domestic economy into the world’s first industrial complex.

This manufacturing machinery was to call forth, a century later, the children of the emancipated, for another round of labour.

Of the two million enslaved by Britain, less than 25% survived. The children of these survivors of the holocaust, a century later, were targeted and recruited to travel back across the Atlantic, to rebuild the nation that had enslaved their forebears.

An abundance of cheap labour was required by the post-war economy. Empire Windrush sailed from Jamaica with the first large cohort; other West Indians sailed in its wake. It was the second ‘middle passage’ for the blacks. They were back on the high seas, again in the basement of ships owned by the Empire.

In Caribbean agriculture they were whipped to high productivity; in Britain they were managed in manufacturing for high profitability. In the cane fields slave laws provided for their caning.

As factory hands they were policed by SUS [Search on Suspicion] laws, an application of the Vagrancy Act of 1824. The principles and provisions of the slave laws and the SUS laws were the same.

The West Indians had travelled to the metropole to find that perspectives on their presence had changed little for the better. Back home they were organized into labour gangs; in the cities of factories they were terrorized by lawless gangs.

The movement from fields to factory was a migration internal to the Empire. They were distributed across Britain. Wherever cheap bodies with second-class legal rights were required by the crown, the West Indians could be found.

There was no factory, hospital, public bus, or train that functioned without the West Indians. They swept the streets. They cleaned up the awful mess left behind by Hitler’s bombs; they answered Churchill’s call for the speedy return of the nation to normalcy. They did the job, cheaply and cheerfully.

Then, after fifty years of service to Britain, came Blackxit. It was now time for them to be rounded up and returned to the Caribbean from whence they came. Blackxit was implemented. It was another phase in the crime against the Caribbean. Brexit rested in a democratic referendum; Blackxit was rooted in ethnic terrorism.

The West Indians had hoped that the slavery mentality of the ‘motherland’ had evolved and evaporated. But they were wrong. It was still addicted to free or cheap black labour with no connection to citizenship. Brexit took the Brits out of Europe; Blackxit drove the West Indians out of Britain.

West Indians were harassed in their communities and at borders. Vans with ‘GO HOME’ posters traversed the streets West Indians had made home. Children born in those streets asked their parents for explanations. The concept of ‘born here’ meant little. Parents paused but had no plausible answer. The pain of dispossession was too much to bear. This was home. But home, said Billie Holiday, is filled with pain.

History is not without its ironies. Blackxit is brutal. Thousands of citizens were stripped of their social rights and many sent packing. Families were forced to hide members and adopted the survival tactic of oppressed Jews in Nazi Germany.

Documents bearing their identities were destroyed by the state, leaving them paperless and stateless. Erased from history, they had no proof of their permanence. Like snowflakes in the spring, their acquired Britishness melted away; gone as a race without a trace.

A British prison in Jamaica was the key to unlock the Blackxit. Together these themes constitute a disgraceful episode of deportation and de-registration that reflected an inner logic of Brexit. Making Britain white again was the opera of the saga. Blacks, they said, could never become true blood Brits.

British harbours and airports awaited their return. Back to the Caribbean they should go; there to await the next call to labour, to build a nation beyond their tropical homes.