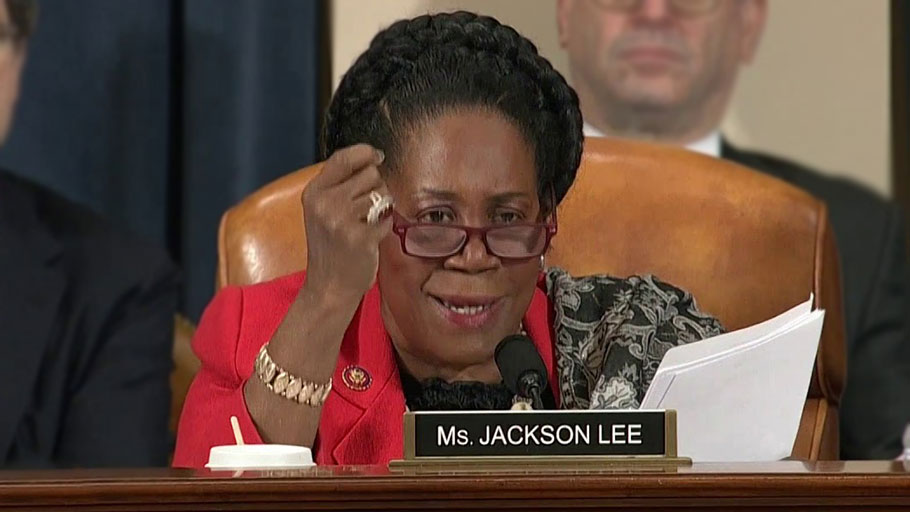 “I think if people begin to associate this legislation with what happened to the descendants of enslaved Africans as a human rights violation, the sordid past that violated the human rights of all of us who are descendants of enslaved Africans, I think that we can find common ground to pass this legislation,” said Congresswoman Jackson Lee in reference to H.R. 40, the reparations legislation that focuses on truth, racial healing, and transformation

Congresswoman Sheila Jackson Lee knows that there has never been another time in which she has garnered so much congressional support and public momentum for H.R. 40, the reparations legislation that focuses on truth, racial healing, and transformation.

he longtime Democratic representative from Texas will chair a hearing on Wednesday, Feb. 17, about the bill.

In an exclusive interview with the National Newspaper Publishers Association on Monday, Feb. 15, Congresswoman Jackson Lee reflected on the long-overdue redress to the descendants of enslaved Africans.

Dr. Benjamin F. Chavis Jr, NNPA President and CEO, saluted Congresswoman Sheila Jackson Lee.  Chavis stated, “For her persistent leadership in support of H.R. 40 and for her granting this exclusive, timely, and in-depth interview with the Black Press of America, we are most grateful.”

The congresswoman praised the powerful resiliency of Black Americans who continue to excel and to transcend the systemic racism and oppression of the past and present.

“I want to give credit to the giants that were and are Black Americans. They are giants,” Congresswoman Jackson Lee declared.

“I want to give credit to the everyday mom and dad who get up every day and get to work and provide for their family. I’m going to give those who came up on the farms or stayed on the farm and raised nine and ten and twelve children,” she reflected.

The Congresswoman continued, “I want to give them the honor that they deserve, and that is to recognize the insurmountable odds that some of them had and how they continue to plant seeds of respect and dignity in their children.

“Has anyone addressed the question of slavery and its comprehensive impact on Black Americans in this country? This is what H.R. 40 will do.”

While the bill doesn’t place a specific monetary value on reparations, it does focus on investigating and presenting the actual facts and truth about the unprecedented centuries of inhuman enslavement of African people, racial healing, and transformation.

The bill would fund a commission to study and develop proposals for providing reparations to African Americans.

The commission’s mission includes identifying the role of federal and state governments in supporting the institution of slavery, forms of discrimination in public and private sectors against freed slaves and their descendants, and lingering adverse effects of slavery on living African Americans and society.

Congresswoman Jackson Lee, who sits on numerous House committees, including the Judiciary, Budget, and Homeland Security, has made the reparations legislation her top priority during the 117th Congress.

“Can anyone imagine that we’ve never gotten a simple, effective, deeply-embedded, and well-respected apology?”

The Congresswoman is further encouraged by the support of the most co-sponsors (166) in the bill’s history, which dates back decades to former Democratic Rep. John Conyers Jr., of Michigan, who first introduced the legislation in 1989.

In an earlier NNPA interview, White House Senior Advisor to President Biden and Director of the Office of Public Engagement Cedric Richmond sounded an urgent tone about the administration’s commitment to ensure racial justice, accessibility, and equity concerning Black America.

“We don’t think the Black community should have to wait on a study, we need to deal with systemic racism right now and, yes, we support the commission, but it’s not going to stop us from acting right now.”

Like several historians who spoke to the Black Press, Congresswoman Jackson Lee recognizes that the transatlantic slave trade dates beyond 1619, the popular understanding of the start of the horrific history of when Africans were stolen from their homeland.

“The fact that slavery was underway for a century in South America before introduction in North America is not widely taught nor commonly understood,” Davis remarked for the NNPA series.

“It is a powerful historical fact missing from our understanding of slavery, its magnitude, and global impact. The knowledge that slavery was underway for a century provides deep insight into how enslaved Africans adapted,” she stated.

“You know, they say it was 400 years ago when the first African slaves landed in the United States, but people were brought to the Americas, meaning Central America, the Caribbean, and South America, before that,” Dr. Garvey exclaimed.

“So, 400 years is just a convenient date, and it shows how much we need to know our history.”

Congresswoman Jackson Lee surmised that passage of H.R. 40 would enhance America’s status in the eyes of African countries and those around the globe.

“I studied and went to school in Ghana as well as in Nigeria, and I believe that Africa should be one of the United States’ closest allies,” the Congresswoman stated.

“There is an eagerness in many of these countries, particularly with young Africans, to align themselves with America, with a democratic America,” she said.

“I think that the governments in Africa will respect the American government seeing that [America] has finally sought to remedy and repair a great loss for the continent, a continent where millions of Africans were taken from.”