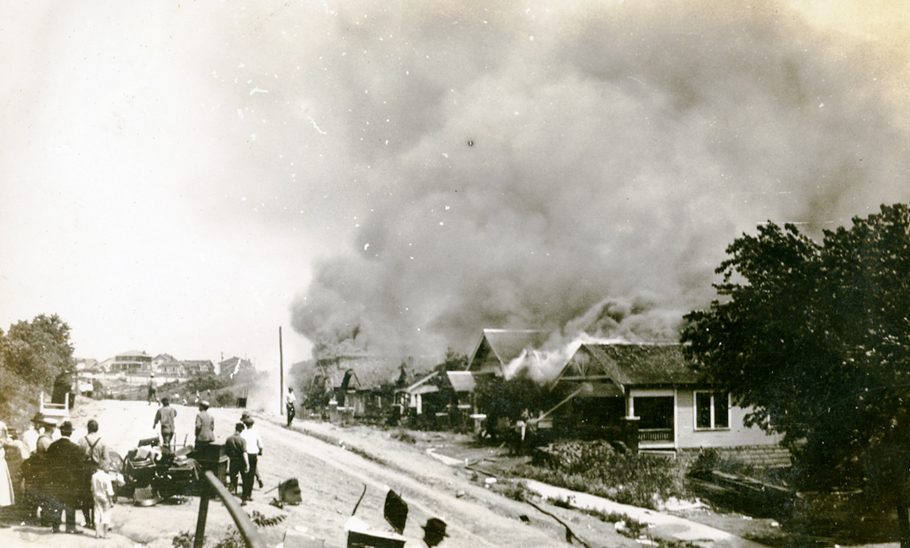 Living in the Age of the White Mob

You Are Here: Home » Blog » Editors' Choice » Living in the Age of the White Mob

For most of the hundred and fifty-six years since the Civil War, white mobs have had free rein over American society. They burned Black schools during Reconstruction, strung Black bodies from trees during the lynching era, and harassed Black students during the civil-rights movement. These were acts of racism, but they were also flexes of political power—murderous demands that the legal and cultural norms of the rioters’ world reign forever, or else be replaced by death and chaos.

The white mob exists outside of American mythology, but it has long shaped the nation’s reality. Consider Tulsa, Oklahoma, where a group of armed whites destroyed the city’s thriving Black business district, in 1921, burning thirty-five square blocks and killing as many as three hundred people. It has been a century since the Tulsa Race Massacre and still, when people learn about it, they express shock, as if it is a surprising outlier. As if, in the same time period, white mobs did not terrorize Rosewood, Florida; and Elaine, Arkansas; and East St. Louis, Illinois. As if a white mob did not descend on Washington, D.C., itself in July, 1919, when President Woodrow Wilson allowed racial violence to escalate in the nation’s capital for several days.

Members of white mobs do not have to mask their faces; they do not need the protection of a “conspiracy of silence.” Being part of a white mob has rarely been a crime. These tactics, when adopted, are done to instill fear, and also for pleasure and excitement. The white mob gains power not from secrecy but from its explicit endorsement within white society. Across the United States, the Tulsa massacre dominated newspaper front pages; one local editorial declared, “the old ‘Niggertown’ must never be allowed in Tulsa again.” Rioters took pictures in front of the burning buildings and collected postcards of the carnage. If Facebook Live and selfie sticks had existed, members of the mob would have broadcast their destruction to the world in real time, too.

White mobs may embarrass some of their social betters, but that disagreement is more over appearances than ideology. The Tulsa World, in 1921, saw the race massacre as a branding problem, and argued for restoring Greenwood “not because of affectionate regard for the colored man, but . . . for the white race whose boast of superiority must now be justified.” Last week, as Donald Trump watched a mob storm the Capitol, he reportedly complained that the rioters looked “low-class.”

A white mob views itself as an extension of the law, not a repudiation of it. The Ku Klux Klan reëmerged in the nineteen-twenties as an insurgency against the crime and amorality that it said gripped the nation. In Oklahoma, its ranks included many members of the white élite—doctors, judges, police commissioners. “Many highly educated men—prominent men—thought it would be a good thing,” Margaret Wilsey, a white Tulsan whose husband was in the Klan, in the twenties, recalled in a 1972 interview. “They would help ‘law and order.’ ” This mindset explains how a pro-Trump crowd brandishing pro-police flags could mutate into a violent mob that attacked and injured cops, killing one officer. “You should be on our side,” a Trump supporter told officers outside the Capitol last week, according to the Washington Post. “ ‘We the people’ means police, too!”

In the years before the election of President Trump, the white mob was most often portrayed as a historical artifact, trapped in unnerving black-and-white photographs of a bygone era. But the mob never really left the places where it had taken root. In 1956, at my alma mater, the University of Alabama, a white mob chased the first Black student, Autherine Lucy, around campus, trapping her in the library after peppering her with rotten eggs—and, through threats of continued violence, compelled the school to suspend her. Lucy is still alive today. When I attended Alabama, a decade ago, white students dressed up in Confederate uniforms and marched around campus every year, play-acting the most infamous white mob in U.S. history. These same students were members of a century-old, all-white secret society called the Machine, which, in 1993, physically assaulted a white female student near campus after burning a cross in her yard, because she ran for student-body president without their endorsement. In 2015, at the University of Oklahoma, which is located in the former “sundown town” of Norman, white fraternity students sang, in a recorded video, “You can hang him from a tree, but he’ll never sign with me. There will never be a nigger at S.A.E.” For some white people, being part of a white mob is the equivalent of a rebellious teen-age phase.

The white mob’s work is political, advancing the white agenda in ways that courts and elections cannot. After committing acts of terror, its members go on about their lives. They bear no life-defining scarlet letter. Recently, I talked to a man named Mark Celeste, who believes that his grandfather, Benjamin Fowler, participated in the Tulsa Race Massacre. Fowler was a railroad worker in Tulsa and, at one point, a member of the Ku Klux Klan. When Celeste was fifteen, his father, a staunch Italian liberal who married into a conservative family, told him and his brothers that their grandfather had taken part in the destruction of Greenwood. It would be another sixty years before Celeste shared the information with his own children, via text message. Celeste condemns the acts of the mob and believes the events of the massacre should be more widely known, but he doesn’t personally feel shame over his grandfather’s role. “I’ll be honest with you. I heard about it then, and then just sort of vaguely catalogued it in my mind,” he told me. “Unless something specifically spurs you, it’s not gonna be thought of—which is terrible, because there are many things that happened that were important that get forgotten.”

The white mob is a criminal conspiracy with no criminals, a historical menace floating outside popular history, a flouting of American ideals draped in the American flag. It is a marvel that white people, for short periods of time, stopped making use of such a potent political tool.

Despite the stomach-churning similarities, 2021 is not 1921. The white mob is now turning against the state, threatening the lives of elected officials, desecrating their sacred chambers, and attacking police officers, because the state has failed to uphold its end of the power-hungry mob’s bargain. For more than a century, Black people have argued that white-mob lawlessness is a threat to their communities, most specifically, but also to members of a democratic society as a whole. “Mob law is dangerous and will undermine the foundations of any government that permits it,” warned Greenwood’s Black newspaper, the Tulsa Star, in 1915. “Unless this monster is subdued in this country serious trouble is sure to follow.”

Now we will see whether white people choose to listen—and federal prosecutors will play a key role in forcing them to hear. Blame for participating in or inciting a mob should be applied to individual actors based on evidence, with criminal punishments that aim to deter future mob activity. To blame violence on general social ills or cultural divisions is to hand-wave away the problem, as white Tulsans did after the race massacre. After last week’s insurrection, Representative Markwayne Mullin, of Oklahoma, told the Tulsa World, “No one is to blame here. We are all to blame,” heaping fault for the insurrection on Democrats, Republicans, journalists, and people on social media—but not President Trump. There is hope that others will address the attack more seriously. So far, more than a hundred people have been arrested by the F.B.I., the Washington Metropolitan Police, or the U.S. Capitol Police for participating in the riot. On Wednesday, Democrats, joined by ten Republicans, impeached Trump in the House of Representatives for inciting a mob at the Capitol. But a Senate trial likely will not occur until after Trump leaves office, and it may drag on for weeks. It’s unclear whether the passions of the moment will translate into long-term political will.

The mob’s activity must be intensively investigated, documented, and publicized. When Tulsa assembled a grand jury in the summer of 1921 to investigate the massacre, the all-white body found that “agitation among the negroes for social equality” was a primary driver of the violence, and blamed Black people for inciting a riot. Seventy years later, when a state-appointed riot commission identified sites of potential mass graves holding massacre victims, the city called off a search for the dead at the last minute. These were failures not of the mob but of the citizens and elected officials who failed to use their legal powers to uncover it. Now Tulsa is trying for a third time to investigate the massacre, at the same time that the federal government is embarking on a first attempt to explain what happened at the Capitol. We can hope that it won’t take as long for federal officials to uncover the truth in Washington as it has taken in Oklahoma.

Most critically, the core grievances of the mob must be rejected, because they are specious. The Tulsa Race Massacre was sparked by a false rape allegation, which was propped up by a sensational newspaper account. Today, people like Senator James Lankford, Republican of Oklahoma, who serves on the 1921 Race Massacre Centennial Commission, should see the danger in stoking false public fears that the 2020 Presidential election was stolen. At the exact moment that the Capitol was breached, Lankford was on the Senate floor, defending his planned vote to object to the election results. After witnessing the intensity of a white mob firsthand, Lankford switched his vote but hedged. He insisted that election security was an “important issue that needs to be resolved,” despite the fact that officials in all fifty states and more than eighty judges certified the accuracy of the 2020 election results. Mealymouthed ambiguity about whether democracy has or hasn’t been subverted is the oxygen that allows a white mob to rage—and to feel righteous about it.

Throughout American history, the white mob has expressed the will of large portions of the white populace. So it is today—forty-five per cent of Republicans said that they supported the Capitol siege, according to a YouGov poll. We live in a country that gestures toward egalitarianism, but, ultimately, white people retain the money, the levers of government, and the raw power. The white mob is a reminder of this plain fact, which lingers in the national psyche long after the mob’s specific actions have been scrubbed from living memory. The white mob persists, in part, because it is not a source of national shame, nor of many people’s personal shame. The authors of American dogma left the white mobs out when they taught us, as children, historical parables of good and evil. Now some ask us, as adults, to brush aside the mob’s actions and believe in democracy. Until the historical and modern truth of white-mob violence becomes part of our understanding of what it means to be American, these mobs’ presence cannot be cleaved from the nation’s identity. Until then, the white mob will always be with us.