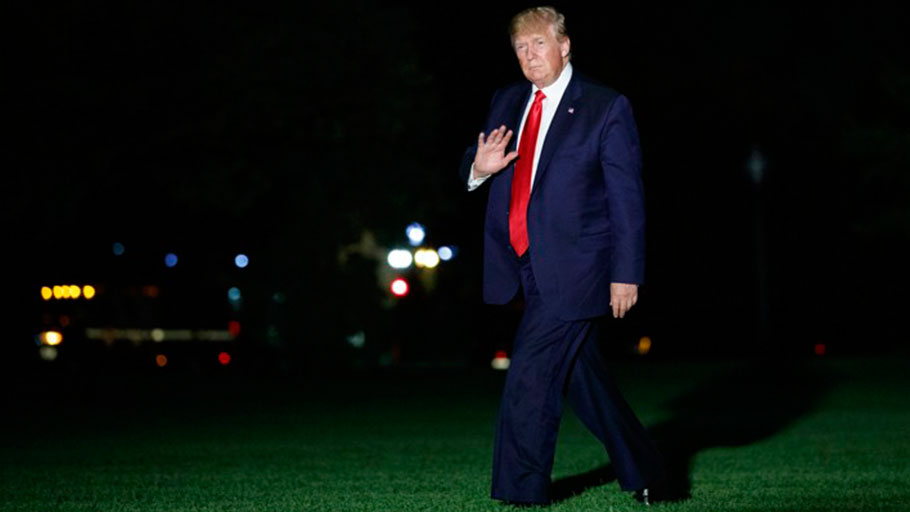 Trump Goes All In on Racism

You Are Here: Home » Blog » Editors' Choice » Trump Goes All In on Racism

The president’s tweets are an invitation to a racial conflict that pits citizen against citizen, under the calculation that racism itself is a winning political strategy.

By David A. Graham, The Atlantic —

If you’re surprised today that Donald Trump is a racist, you haven’t been paying attention. Since he entered politics, he has proved it repeatedly. In fact, as I reported with several colleagues in The Atlantic recently, bigotry has been a part of Trump’s public persona since he’s had a public persona.

Yet Trump’s racist Twitter attacks on Democratic congresswomen over the weekend still managed to shock, even in this benumbed age, because of his willingness and eagerness to place racism at the center of his political platform in a run for reelection to the presidency. It is not simply the employment of racist ideas for political advantage—that has been a staple of campaigns in both parties for some time. It is the invitation to a racial conflict that pits citizen against citizen, under the calculation that racism itself is a winning strategy, that astonishes.

Trump uses Twitter to try on new ideas and policy ideas in real time, seeing how he likes them, and then either discarding them or centering them. The current incident began, as my colleague Yoni Appelbaum reports, with Trump tweeting that the Democratic members should “go back and help fix the totally broken and crime infested places from which they came. Then come back and show us how it is done.” (While Trump doesn’t make explicit whom he means, it’s likely he’s referring to the “squad” of progressive Democrats—all four of whom are American citizens, and three of whom were born in the United States.) By Sunday evening, he had decided he liked the reaction, welcoming a battle over race at the ballot box in 2020. By Monday, he was demanding that Democrats apologize to him.

Many contradictions are at play in Trump’s remarks—his political rise was based on critiquing perceived flaws in American society, and now he is portraying the same dissent as beyond the pale. Of course, the key difference is that he is white, whereas (say) Representative Ayanna Pressley is not.

But parallels with 2016 go only so far. During his first presidential campaign, Trump openly pitted immigrants against American citizens, while ostensibly seeking the votes of African Americans and Latinos. “What the hell do you have to lose?” Trump asked on the trail. (In fact, Trump’s campaign was seeking to depress turnout in these groups, realizing that while minorities wouldn’t vote for him, they might not vote for Hillary Clinton either.)

Trump is now doing something different. By attacking the black and brown women of the squad, he is not just pitting citizen against immigrant, but citizen against citizen. This is a significant shift. Politicians from Richard Nixon to Bill Clinton have seen the utility of coded racial appeals to white voters, but over time they have also calculated that these appeals must be coded or else the political cost will outweigh the benefit. The late Republican strategist Lee Atwater captured the dynamic in an infamous 1981 quote:

You start out in 1954 by saying, “Nigger, nigger, nigger.” By 1968 you can’t say “nigger”—that hurts you, backfires. So you say stuff like, uh, forced busing, states’ rights, and all that stuff, and you’re getting so abstract. Now, you’re talking about cutting taxes, and all these things you’re talking about are totally economic things and a byproduct of them is, blacks get hurt worse than whites … “We want to cut this,” is much more abstract than even the busing thing, uh, and a hell of a lot more abstract than “Nigger, nigger.”

Trump is going in the opposite direction. By now, one would be only slightly surprised to hear the president simply use the N-word. Perhaps he’s saving that until the general election.

The open embrace of racism as a political strategy is, however, a natural progression from the 2016 campaign. While the president’s bigotry in the first campaign was instinctive, a reflection of his long-held and -lived convictions, it also served a political purpose. He and his advisers understood the appeal it would have. After the violent white-supremacist march in Charlottesville, Virginia, in August 2017, Trump praised “very fine people on both sides,” causing a firestorm.

But Trump’s chief strategist, Steve Bannon, told The New York Times he actually welcomed attacks on the president as a bigot. “The race-identity politics of the left wants to say it’s all racist,” Bannon said. “Just give me more. Tear down more statues. Say the revolution is coming. I can’t get enough of it.” Bannon was almost immediately pushed out of the White House, but his vision persisted.

The problem the president faced early in his term was that, as Atwater implied, open racism was not acceptable. Trump first had to lay the groundwork, acclimating the country, or at least his supporters and political allies, to the new rhetoric. He now appears to have succeeded.

During the first two years of Trump’s presidency, House Speaker Paul Ryan’s responses to the president’s outrageous statements were, correctly, derided as shamefully weak. In the reporter Tim Alberta’s new book, American Carnage, Ryan discusses his dealings with Trump. “We’ve gotten so numbed by it all,” he said. “Not in government, but where we live our lives, we have a responsibility to try and rebuild. Don’t call a woman a ‘horse face.’ Don’t cheat on your wife. Don’t cheat on anything. Be a good person. Set a good example.”

The utter silence among elected Republicans in response to Trump’s rant on Sunday shows how effective that numbing has been. As pitiful as Ryan’s responses were, it’s impossible to imagine any but a very few GOP officeholders even approaching their vehemence. Senator Lindsey Graham, once an outspoken critic of Trump and a leader in his party’s moderate wing, hastens to catch up to the president by calling the squad “anti-America.” The pundit Erick Erickson, once a prominent never-Trumper and now a staunch defender of the president, is willing to say the tweets were wrong but won’t do any more: “It wasn’t just inaccurate and it wasn’t just wrong. It went beyond all that. But I’m done with it” because he’s “just unwilling to let the other side tell me how I have to operate.” (Accepting what you believe is reprehensible behavior to own the libs!)

What remains unclear is who is the wiser—Atwater the elliptical race-baiter or Trump the open one. Simply because the president has concluded that open racial disparagement is a winning political tactic doesn’t mean that his calculus is correct, and Trump has made good and bad bets on political outcomes. During the 2018 midterms, the GOP suffered a political battering. Most people viewed this as a rebuke of Trump himself, but the president seems to believe the vote was simply a referendum on Congress.

Monday morning, after demanding an apology from the women he’d attacked, Trump offered a hypothetical: “If Democrats want to unite around the foul language & racist hatred spewed from the mouths and actions of these very unpopular & unrepresentative Congresswomen, it will be interesting to see how it plays out.”

Trump, ever the master of projection, is at it again here. If one wants to see what happens when a political party unites around foul language and racist hatred spewed from the mouth of an unpopular and unrepresentative politician, the Republican Party serves that purpose too.

This article was originally published by The Atlantic.