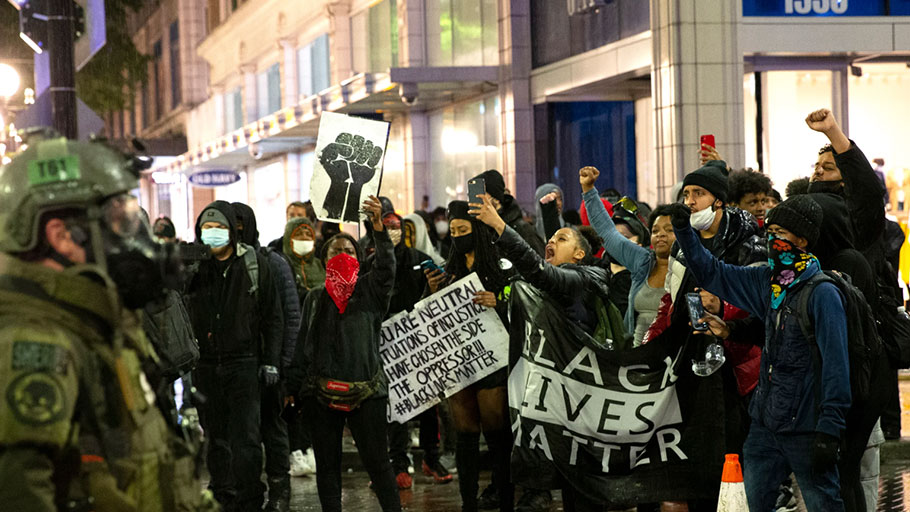 “My people are being killed.”

Veteran organizers, like Nupol Kiazolu, the 19-year-old president of Black Lives Matter of Greater New York, are familiar with the ebbs and flows of a protest. She stood nose-to-nose with Nazis in Charlottesville. She’s fled law enforcement with rifle sights set on her chest. She knows it means risking her life, even before the COVID-19 pandemic ravaged the United States. But now she not only has to fear police and counterprotesters; the mere act of coming together to demonstrate poses just as much of a threat to protesters’ health and safety. And still, they gather.

“At the end of the day, whether I sit at home or I’m on the front lines, I could be killed just for the color of my skin,” Nupol says. “If anything were to happen to me, I would want it to be for a righteous cause.”

Nupol’s voice was still hoarse from tear gas. She spoke to Teen Vogue from Minneapolis, where she has worked as a frontline organizer with Minnesota’s Black Lives Matter to coordinate resistance efforts in the city where law enforcement officers were filmed kneeling on the neck of George Floyd, a 46-year-old Black man, for nearly nine minutes, killing him. The resulting protests have wrought even more viral instances of police violence against Black protesters, journalists, and even apparent bystanders.

Meanwhile, Minnesota governor Tim Walz classified the protests as a potential “super-spreader” event for the coronavirus, similar to the bond parade in Philadelphia, which led to a surge in flu deaths during the Spanish Flu outbreak in 1918. The Centers for Disease Control and Prevention reports that the coronavirus primarily spreads through respiratory droplets produced when an infected person coughs, sneezes, or talks. These droplets can then land in the mouth, nose, or even the eyes of someone nearby. It can also be spread if someone touches a contaminated surface and then touches their mouth, nose, or eyes. Social distancing precautions are impossible to maintain at large demonstrations where people are packed closely together, and screaming or singing can allow contaminated respiratory droplets to travel farther.

Young protesters say they’re aware of the risks, but that there is even more at stake.

“There’s a deadly pandemic, but racism is still alive and well in this country,” Dani, a 20-year-old student from Long Island, tells Teen Vogue. “If we don’t fight it, nothing will change.”

Dani is one of over 4,400 people arrested across the country, as of June 1, during mass protests since Floyd’s death on May 25 — part of a broader, often violent, crackdown by police and federal law enforcement officers on demonstrators and journalists covering these events. She spoke with Teen Vogue on the condition that her name is protected, citing privacy and safety concerns associated with the protest. As a pre-med student, she’s well-acquainted with the dangers of large gatherings during the pandemic. Dani says she was holding a sign in the middle of the street, when the police arrested her for disorderly conduct, as she had refused to comply with requests to move back. As The Atlantic reported, protesters are particularly exposed to the virus if they’re arrested and crowded into police vans and jails — risk compounding risk compounding risk.

“What folks in the streets right now, especially young people, need to hear right now is that you’re powerful,” says Patrisse Cullors, cofounder of the global Black Lives National movement. “This moment of uprising is part of a long history of uprisings. We can only hold onto grief for so long until our grief turns into protest.”

People protesting should practice risk reduction, says Camara P. Jones, a fellow at the Radcliffe Institute for Advanced Study at Harvard University, adjunct professor at both Morehouse School of Medicine and Emory University, and former president of the American Public Health Association. “There’s a lot of risk. It would be better if all of us were still actually sheltering in place,” she tells Teen Vogue. “But all of us who weren’t able to shelter in place are the very same people who are more likely to be deemed ‘essential’ while not being protected as if they are ‘essential.’” Jones says she hopes to see protesters use multiple layers of face and body protection, suggesting that inserting a coffee filter into one’s face mask can serve as an additional barrier to the virus’s spread. Goggles and hand-sanitizer, in addition to wearing masks, are also reported to mitigate potential harm at these events. Protesters can also hold signs instead of chanting, bang drums, or play other musical instruments — activities that are less likely to produce and disseminate contaminated respiratory droplets.

“This is a much better way for us to reopen than people being forced to work in meatpacking plants, close together, nothing being done, and no protective equipment,” says Jones. “At least this is a way for people to incur risk under their own terms and to communicate important messages.”

As protesters across the country take to the streets , even more news has surfaced of violence against Black Americans. In Kentucky, 53-year-old David McAtee — a local restaurant owner known to give free food to first responders, like police — was shot and killed by law enforcement outside his business during protests, as the Louisville Courier-Journal reported. In Atlanta, police were caught on camera tasing two college students who were driving home, seemingly unprovoked, arresting both, and then releasing them later without any charges. And protesters captured video of officers from the New York Police Department driving police vans into a crowd of demonstrators.

In response to the aforementioned incidents, the Louisville police chief was fired, six Atlanta officers were charged with use of excessive force, and New York City mayor Bill DeBlasio announced an investigation into the NYPD van incident. Minneapolis police did not respond to Teen Vogue’s multiple requests for comment.

Josie Kantras, an 18-year-old student from Omaha, Nebraska, says she saw police misconduct firsthand. On Saturday, while protesting in her hometown, tearfully chanting, “I can’t breathe,” she recalls watching a group of officers, none of whom were Black, openly laughing at demonstrators. Just hours later that same night, a 22-year-old Black man named James Scurlock was fatally shot after getting into a physical altercation with a bar owner standing guard outside his business. The Douglas County attorney determined that the bar owner was acting in self-defense, so he will not face charges. He has also not been charged for the expired concealed carry permit he had for the weapon, though those charges could be forthcoming.

“If I’m going to leave the house, then this is the most valid reason that I’m going to do it,” says Josie. “My people are being killed.”

A spokesperson for Omaha’s police department said that they had not heard other complaints about officers laughing at protesters.

“We urge people who have a complaint against one of our officers to file a formal complaint with Internal Affairs,” the spokesperson said in a statement to Teen Vogue. “We expect professionalism from our officers at all times, and we respect citizens’ right to peacefully protest, so we will investigate when there are claims that our officers acted inappropriately.”

Josie tells Teen Vogue she was also antagonized by a white protester, apparently in attendance to support the cause. When one white protester incited a “F*ck Trump” chant at an Omaha vigil for George Floyd, Josie, a mixed-race Black teen, says she asked the woman to take the time to respect Black victims of violence instead. “She asked me if I was for Black Lives Matter and she started getting up in my face,” Josie recalls. “I said, ‘My mother is a Black woman.’ That’s when she swung at me and gave me a bloody nose.”

Numerous videos depicting white protesters looting or damaging property against the direction of Black activists have circulated on Twitter. A person dubbed “the Umbrella Man” was filmed smashing windows in Minneapolis, and two white women in Los Angeles were recorded tagging a Starbucks with “BLM.” In both cases, Black locals came forward to admonish those involved in the property damage. Authorities and activists have not yet confirmed these individuals’ motives. Though it’s not evident who’s behind these actions, the Trump administration characterized them as “radical” leftists with antifa, but did not provide any evidence to the public to back up that claim. Meanwhile, the Department of Homeland Security, citing FBI information, said that extremist communities planned to instigate violence at the George Floyd protests, according to Politico. NBC News reported that white nationalists were posing as antifa on Twitter, pushing violent rhetoric.

Nupol expressed frustration that many have blamed Black Lives Matter organizers for the outbursts. “It’s white extremists,” she tells Teen Vogue. “I’ve seen it with my own two eyes.” In Minneapolis, she says she and other Black organizers engaged in de-escalation tactics, such as standing between police and protesters, to keep people safe. When they confronted white protesters engaging in property destruction, Nupol says, one of the agitators charged his vehicle toward her, and hurled racial slurs at her and other Black protesters.

Nupol is back in New York City to aid her hometown’s resistance movement. The death toll from COVID-19 has surpassed 100,000 nationwide, it’s been just over a week since George Floyd was killed by police, and protests continue to grow. “I’ve never thought this time would come, that people would get this riled up over Black lives,” Nupol says. “It never seemed that important for people outside the Black community, so seeing this kind of solidarity is shocking — but it’s also inspiring.”