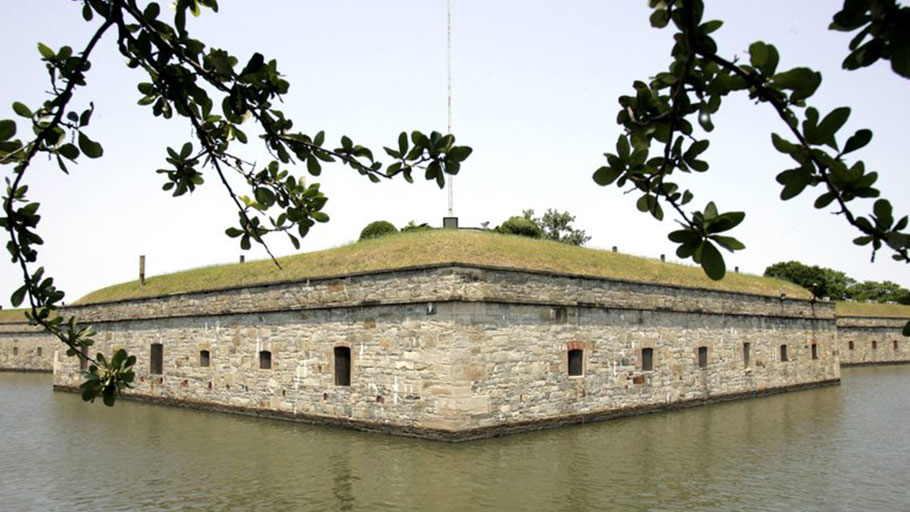 Historian works to ‘humanize those enslaved’ at Fort Monroe

This June 11, 2008 file photo shows some of the fortifications inside the moat at Fort Monroe in Hampton, Va. Casemate Museum Historian Robert Kelly is working to ‘humanize those enslaved’ at Fort Monroe — one name at a time. His recently published paper, “Humanizing the Enslaved of Fort Monroe’s Arc of Freedom,” highlights research about the full names of slaves and their work, letters sent to chief engineers and copies of reports at forts Calhoun/Wool and Monroe. (AP Photo/Steve Helber, File)

HAMPTON, Va. (AP) — A trove of historical records tells us Fort Monroe in Hampton was built on the backs of thousands of African slaves.

But little was known about their identities or who they were — until now.

Meet Amos Henley, 23. Skilled, but unpaid for his efforts, Henley was among hundreds leased out by slave owners to the Army — and fetching a tidy sum for them. They labored between 1820 and 1824 during the days when the foundation of the stone fortress was laid.

Henley, who worked on a barge crew daily from sunrise to sunset, died in 1821 during an accident while hauling stone with a windlass crank at Old Point Comfort.

Notably, there is a primary record of his story and other slave laborers that include first and last names — significant because it was created in a register some 50 years before the first African Americans (except for free blacks) were counted in a U.S. Census.

The register, handwritten entries in two books, is the subject of a recently published paper, “Humanizing the Enslaved of Fort Monroe’s Arc of Freedom,” written by Casemate Museum historian W. Robert Kelly.

Kelly was recently the featured speaker and presented his paper during an Afro-American Historical Genealogy Society of Hampton Roads’ regular meeting at the Hampton Public Library.

The three-section paper, published in the “Journal of Contemporary Archival Studies,” is work-in-progress research that explores several entries recorded by the Army Corps of Engineers between 1819 and 1917.

It highlights research about the full names of slaves and their work, letters sent to chief engineers and copies of reports at forts Calhoun/Wool and Monroe, among other entries.

For Kelly, discovering a manifest of enslaved laborers not only weaves in another layer about the fort’s history, it humanizes those slave laborers who built the country’s largest stone fort.

“It’s a well-known fact that slave labor was used to construct Fort Monroe. What makes this so significant is we know actually what tasks they were doing and we are beginning to learn who they were. That’s important,” Kelly said. “It’s ground-breaking research that we intend to continue . . . to make accessible to the public, to make searchable, to make usable.”

Meticulous entries, one called “Register of Work Done by Slave Labor at Fort Monroe,” lists first and last names of slaves, owners, rates of pay slaves earned for their owners monthly, the number of days worked and daily routines. Less frequently, details about slaves, such as who was “absent, sick, discharged, deserted or died,” also were recorded, Kelly wrote.

The register, with some 300 names of slaves and 50 owners, during the 1820s offers a view into those lives.

Adding a name to a face of those contributions begins to pave “the way for future generations of enslaved people to experience Fort Monroe not as a labor camp, but as Freedom’s Fortress,” Kelly wrote, alluding to decades later when thousands of slaves sought refuge there.

Ultimately, Kelly and volunteers who are transcribing the register into an Excel database, want to make the data accessible to the Hampton Roads area for families engaged in genealogy projects, he said.

The Hampton Roads chapter of the AAHGS is an affiliate with the national organization, which fosters and encourages historical and genealogical studies of all ethnic groups, with special emphasis upon Afro-Americans, according to its website.

Stephanie Thomas, president of the local chapter, welcomes the timeliness of Kelly’s work to provide another tool for the community, not just those whose ancestors were slaves, but for anyone in the community, she said.

Kelly said he learned about the registry by chance during a trip the National Archives at Philadelphia several years ago. The research trip in 2014, paid for by the Fort Monroe Authority, was to gather more data about the fort’s history, which was decommissioned in 2011.

After spending hundreds of hours pouring over documents, discovering this registry was an eye-opener, Kelly said. The earliest recorded listings of African Americans did not happen before the 1870 Census.

Prior to that, enslaved Africans were only listed as a number, said archivist Patrick Connelly, who works at the Philadelphia field office.

The 300-page register inside two thickly bound books has been there for decades among 105,000 cubic feet of materials housed at the field office, he said.

In his 20 years working at the archive, Connelly said the register had not had much traction among researchers — if any. Connelly added he was happy to tip Kelly to it.

It was rare to see any federal registry listing enslaved persons, let alone both first and last names, Connelly said.

“That’s the incredible part,” Connelly said. “You could think of them as individuals and not as property, which is what they were. With that last name, it makes them more human.”

Kelly’s three-part paper notes the names of slaves — Armistead, among others — that are surnames associated with the Tidewater region. The paper also describes the rates of pay slaves earned for their owners — on average $9 per month, per slave.

Other parts of the register contained documented evidence of the existence of skilled slave labor, including “bricklaying and masonry,” with information about engineers contracting a land owner who owned “black laborers” to provide services, Kelly wrote.

The second section of Kelly’s paper focuses on the fort’s Civil War era and the formerly enslaved, who were accepted to the fort under Gen. Benjamin Butler as contraband of war, who worked there.

The third section reviews the preliminary findings and how this primary source information may be incorporated into exhibits at the Fort Monroe Visitors and Education Center — slated to open in August — possibly with an interactive display and computer archival access for the community.

“It give us all kinds of opportunity,” Kelly said. “It’s important we tell the whole story.”