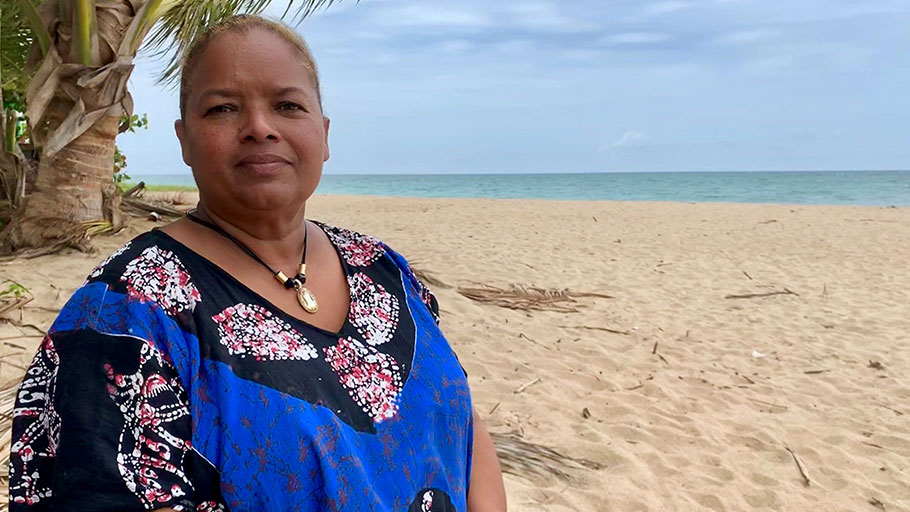 Photo of Modesta Irizarry, a community leader, in Loíza, Puerto Rico, in June 2019.

LOÍZA, Puerto Rico — The waves crashed loudly on the collapsed ruins of the Paseo del Atlántico, a walkway that once partially protected residents here from the volatile ocean. Erosion along this northernmost coast of Puerto Rico, nearly 20 miles east of San Juan, precipitated the promenade’s destruction for more than a decade and, in 2012, it finally fell into the Atlantic, exposing the Parcelas Suárez neighborhood to the water’s edge.

Its 1,560 locals now fear daily for their homes and lives.

Parcelas Suárez straddles Loíza’s gloried waterfront. Its largely Afro-Caribbean community has little choice but to be active in the fight for its future — and hold the federal and local government responsible for bad decision-making in planning their communities, developing projects on the coasts and the lack of follow up.

The mayor’s office keeps a running tally of the town’s community leaders — currently 32 — as they search for assistance, claims and services for the nearly 25,000 who reside in Loíza.

Local leaders planning for the future

“In Loíza, when something is missing, we work together,” community leader Modesta Irizarry says. She recalls the recovery from Hurricane Maria, in 2017, when the women joined forces to prepare food for people in shelters and worked to financially support their families by making and selling handicrafts.

They also joined forces to demand that the Army Corps of Engineers decide on what kind of project they would develop to protect Parcelas Suárez from falling into the ocean. 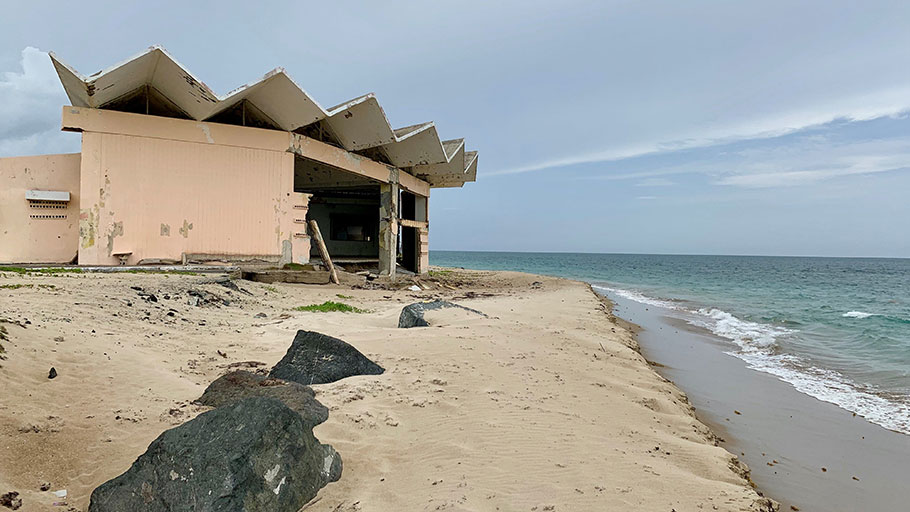 A community center that was destroyed by the coastal erosion in Loíza, Puerto Rico, in June 2019.

Alexis Correa Allende, 35, witnessed the Paseo del Atlántico’s ruination, along with a prized community center, and has served as his neighborhood’s community board spokesman in Loíza since 2012. Allende doesn’t have a formal education in public administration or politics; he is driven by concern for the safety of his neighbors and by his outrage at how the government continues to turn its back on his town.

He carries a folder of plans, coastal erosion studies and federal proposals alongside meeting notes, letters, emails and arguments he has made on behalf of the community before the Department of Natural Resources and Loíza’s municipal government, as well as the resident commissioner, Jenniffer González-Colón, Puerto Rico’s sole representative to the U.S. Congress.

As spokesman, Allende pushed the Corps of Engineers to allocate $5.2 million in funds for the construction of a breakwater to protect the coastline and residents here. That money was allocated in 2018, but construction has yet to break ground.

Meanwhile, the waves continue to encroach.

The Loíza municipality is a place of narrow streets and pastel corners, each of which lead inevitably to the ocean. The city is filled with palm trees and “chinchorros,” traditional, unassuming bars or shops where residents, called Loiceños, drink together and sell fried local food and natural coconut water.

The Loiceños are noble people, fighters who descend from enslaved Africans brought to this Spanish colony from the early 1500s. Most were located in towns on the coasts, such as Loíza, to work the sugarcane fields. Rare amid Puerto Rico’s “jibaro” culture, which imagines a white, Puerto Rican countryman ideal, the Loiceños defend fiercely their African heritage.

As opposed to 11% of all Puerto Ricans, 38% of Loíza residents identify as black, a conservative figure, according to several community leaders.

Historically, Loíza is largely forgotten by the government, private industry, the news media and Puerto Ricans themselves. Over 50% of its population lives in poverty, according to 2019 Census estimates. But its crystal beaches, lively gastronomy and culture survive, such as “bomba,” a traditional dance and musical style rooted in the island’s history of slavery, and which has evolved into an expression of Afro-Puerto Rican culture.

People here have long fought for their community’s future. Like the coconut seller who asked a reporter to move as he knocked fruit from the tree, locals find creative ways to maintain their livelihood, to survive. And they attribute that survival to their African heritage. It can be seen in the colors of their clothes: yellow, green and red. Or in the turbans some women use in their hair. But this heritage can also be glimpsed in Loíza’s cuisine, in which fish, salmorejo (a tomato puree), juice, cassava, banana and coconut stand out.

In Loíza, the cradle of black culture in Puerto Rico, dishes are eaten by the sea after they’ve been worked with a kind of Afro-Taíno technique, then cooked on a “buren,” a clay surface heated by stones. Here, the coconut trees and gastro tradition are as fundamental to the area’s identity as the sea. But it hasn’t been easy to maintain the richness of that heritage as the community simultaneously battles poverty, a declining population, eroding coasts and the ever shifting challenges of U.S. presence in Puerto Rico, where it has had authority since 1898, only one year after the island established self-rule from Spain.

“The sea demands the space that we take away,” says Irizarry, sitting before an eroding Loíza beach. Parcelas Suárez “has been struggling for years.”

Whether it can persevere in sustaining the community and culture that distinguish Loíza is to be seen.

Víctor Rodríguez-Velázquez covers finance and government for Centro de Periodismo Investigativo. This dispatch is part of a series called “On the Ground” with Report for America, an initiative of The GroundTruth Project. Follow him on Twitter: @Viktor_Rodz