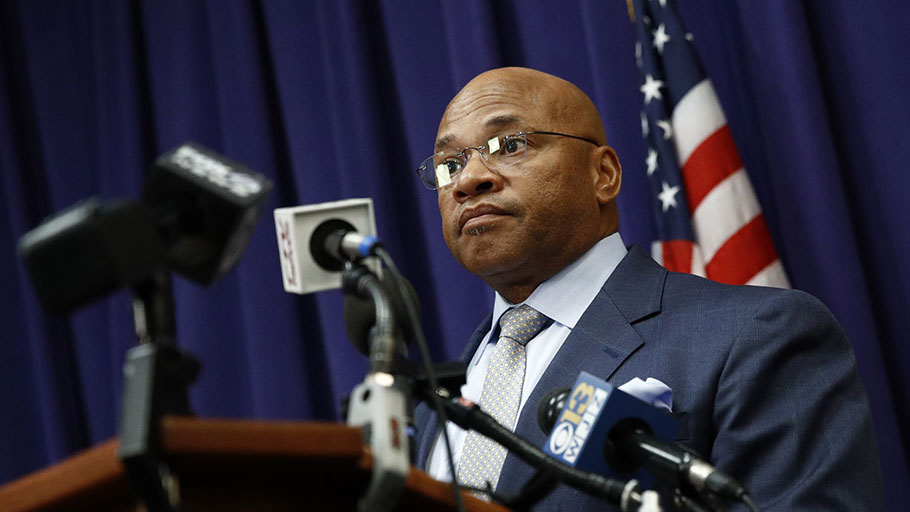 Baltimore is going through the same policing pangs as the rest of the nation, but worse.

This is a homecoming for Gary Tuggle, only going home for him means having a gun strapped to his hip and at least five other officers flanking him while casing the East Baltimore block he played on as a kid. The 54-year-old is the interim police chief of Charm City, the third chief this year after the first two were fired — one amid a federal investigation into his taxes, the other for presiding over a historic spate of murders. Tuggle’s arrival comes during a federal consent decree that requires Baltimore to reform a police department known for racial profiling and escalating tactics, and a skeptical public still reeling from the 2015 death of Freddie Gray under cop custody and the protests that followed. It is a community with few jobs and opportunities, with many unable to find work because of criminal records racked up during a war on drugs that disproportionately incarcerated men of color.

Yet when confronted with those obstacles, the former Drug Enforcement Administration agent declines to criticize drug policies and contends that too much emphasis is placed on the negative. “Every day in this city there’s positive interactions between young Black males and our police officers, and we don’t focus enough on that,” Tuggle says while walking through his old neighborhood in mid-September. “Right now we’re down about 20 percent in murders. We’re down about 6 percent in nonfatal shootings. We’re down a third in burglaries.”

Tuggle is caught in a tough place, a man both blue and black at a time when activists seem to want him to choose between the two.

Perhaps Tuggle’s reticence came from the fact that he was actively auditioning for the full-time police chief gig, informing Mayor Catherine Pugh in May that he would like the interim tag removed eventually. The city had shown signs of improvement, and those stats he described were comforting, particularly after Baltimore set a record for per capita murders last year with 343 homicides. But the improvement was short-lived: The summer ended with 17 killings the week after we met. Pugh led a peace walk through the city, while Tuggle announced increased patrols and canceled leave for all officers for three days to get the situation under control. This Tuesday, he withdrew his name for consideration from the top post in what he said was a “painful decision” made for personal reasons.

“If you want to have media and the community not focus on the negative, eliminate the negative,” says Ray Kelly, a West Baltimore community activist. “But as long as we’re seeing police officers beating on residents on the street while they’re in uniform, the people’s perception is not going to change.”

In the ’80s, Tuggle was studying at Coppin State University and working security near a shopping mall in Baltimore’s Inner Harbor, when he befriended a beat cop who convinced him to join the force. Now a married father of four, he started with the Baltimore Police Department before joining the DEA, where he graduated first in his class and fought the drug war in Barbados and Trinidad from 1995 to 2013. He ran the DEA’s Baltimore office in 2013 and its Philadelphia division in 2015 before returning to the BPD in March — and was named interim commissioner after his predecessor, Darryl De Sousa, resigned in May. Building off his past, Tuggle says he is assigning cops to walk through their neighborhoods more and to form relationships with the people they’ve sworn to protect. “We do it every day,” he says, from youth intervention programs to cop-and-community basketball games.

But the sunny side Tuggle advocated isn’t necessarily breaking through on the ground. “Growing up in this neighborhood … the relationship [with police officers] was a lot better. When we sat out on the stoop, played chess, they pulled over,” says Bico Jones, a lifelong resident of the same neighborhood where Tuggle grew up. And today? “When the police come, people are ready to run, for no reason at all. They fear the police officers now,” Jones say. Others put their criticism of the police more bluntly. “Most of them are racist,” says Dionne Winkley, who claims she had her jaw broken by police and that nothing has changed since Freddie Gray, that Black officers are just as much to blame as White ones. “Just treat us like we are human,” she says.

Tuggle is caught in a tough place, a man both blue and Black at a time when activists seem to want him to choose between the two. He doesn’t linger on race long when asked about his experience as a Black officer watching the country debate issues like NFL players kneeling during the national anthem to protest police brutality. “My experience with being a Black man, also having been raised in a community that’s predominately Black, I feel that responsibility to make that relationship between the police and the community better,” Tuggle says, before adding, again: “We really need to focus on the positive interactions as much as the negative.”

Yet Baltimore is only inching along in its adherence to the consent decree ordered by the Department of Justice in April 2017, with community meetings still introducing the framework to a skeptical public. The decree required training to promote nondiscriminatory standards for stops, searches and arrests, while emphasizing de-escalation tactics and greater accountability for police misconduct. Police, Kelly says, pulled back after Freddie Gray, resulting in “anarchy” as drug dealing was open and rampant. But, Kelly says, community members must engage with police if they want to address their concerns. “Change doesn’t come on the streets,” he says. “It doesn’t come from Facebook likes or retweets. The change actually has to be written into policy or you’re still yelling.”

As we film for a segment on tonight’s episode of Take On America, Tuggle talks with folks, asking about their work and their health. “Y’all be safe, all right?” he says as he leaves them, then points to his old home, on North Milton. Most of the houses are vacant now. “This was a nice neighborhood when I grew up,” he says. “Working-class folks that were employed in industry, manufacturing. As you can see, it’s changed significantly over the years, due in part to violence, drug infestation and just general crime.” Now the chief must figure out how to truly go home again, not for his sake, but to protect the city he loves.