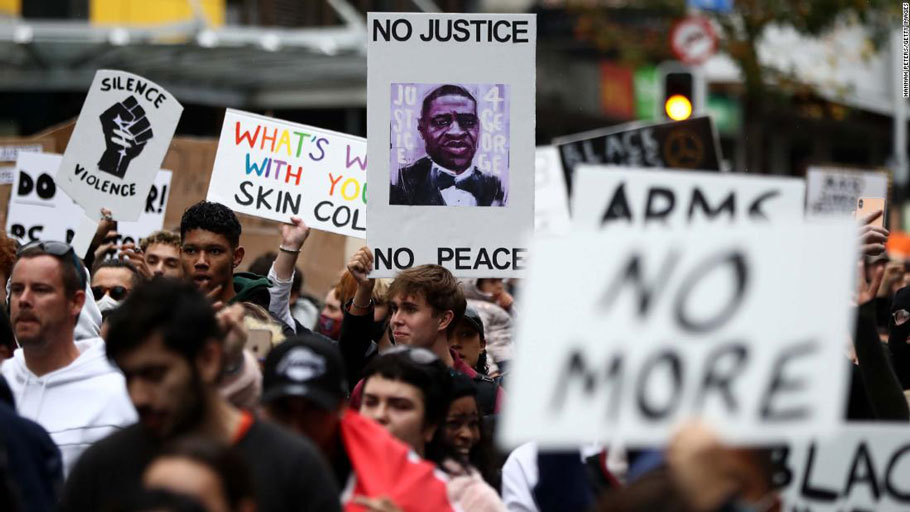 Protesters have marched in the US for six consecutive nights over the death of George Floyd at the hands of a police officer. Their anger over the killing of the unarmed black man has now spread worldwide.

Over the weekend demonstrators gathered in London, Berlin and Auckland, among other cities, to protest against police brutality in solidarity with the US crowds.

In London, protesters rallied in Trafalgar Square on Sunday morning, in defiance of Britain’s lockdown rules which prohibit large gatherings.
Some participants marched to the US embassy in the capital’s Nine Elms area.

On Monday, the Metropolitan Police said six people were arrested at a protest after they failed to “comply with police instructions.” 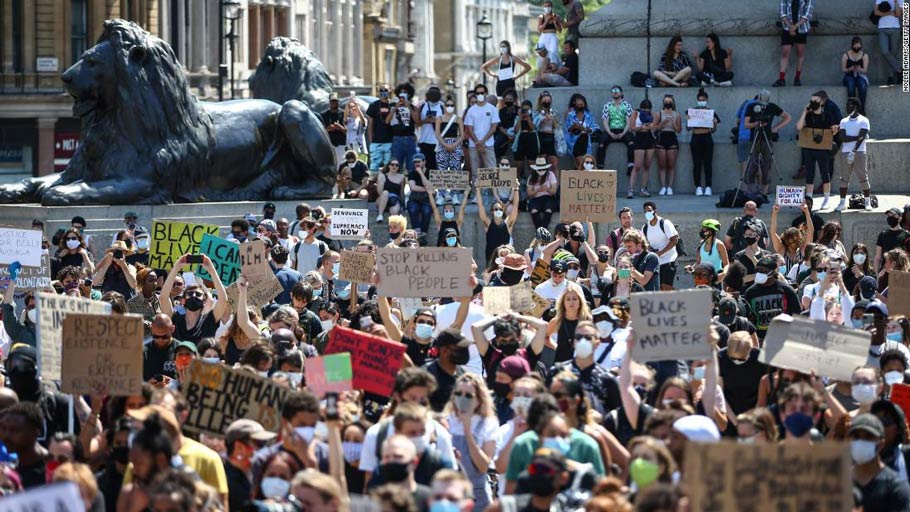 People hold placards as they join a Black Lives Matter march at Trafalgar Square in London on Sunday, May 31.

Crowds gathered in Berlin in front of the US embassy on Saturday and Sunday. Participants wore face masks and carried signs declaring “Black lives matter” and “Justice can’t wait”. 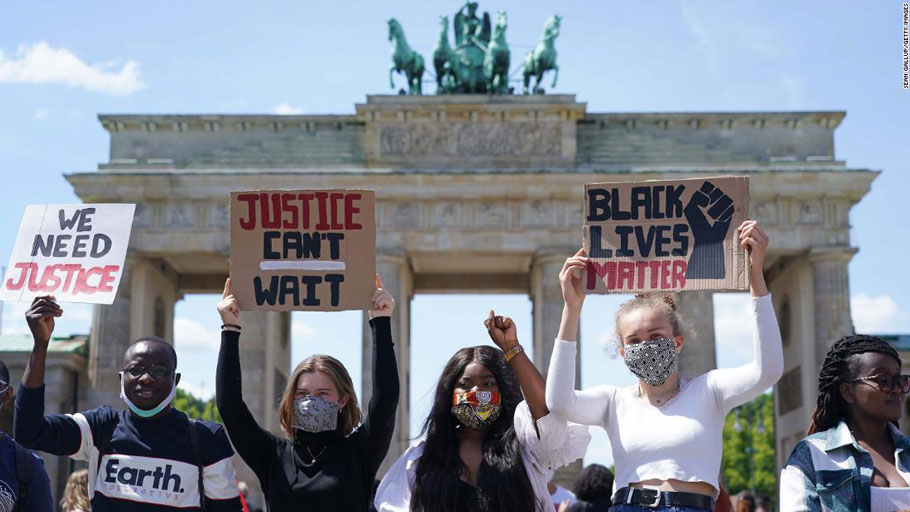 People attend a rally against racism in front of the Brandenburg Gate in Berlin on Sunday, May 31.

Activists wearing black clothing and face masks took a knee and held up signs reading “I can’t breathe,” “We are all George Floyd” and “Racism chokes us” in Paris on Monday.

Describing the video of George Floyd’s death in Minneapolis as “surreal and unbearable,” the protest organizers called on “all individuals with a sense of justice” to condemn the “racist crime perpetrated by the police,” calling it an “ordinary” occurrence in the US. 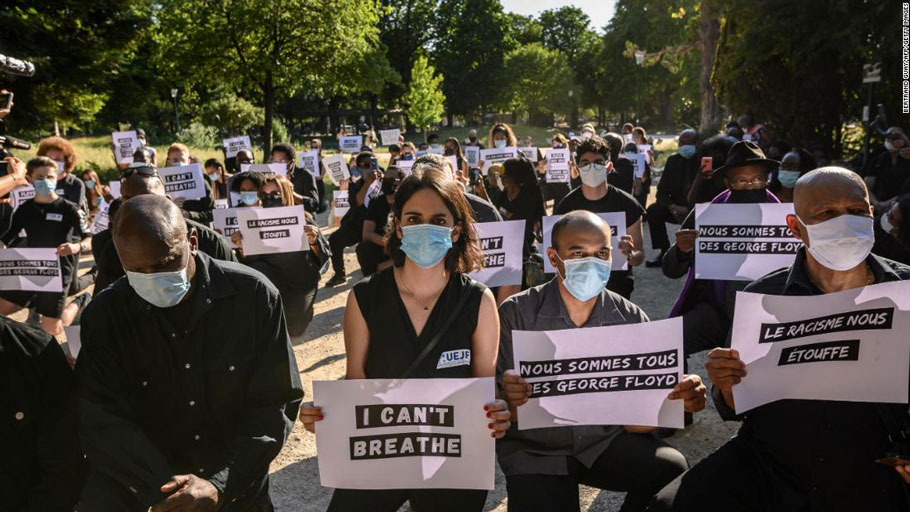 The scene outside the US embassy in Paris on Monday.

Chants of “no justice, no peace” were heard In the streets of Copenhagen on Sunday, as protesters marched over Floyd’s death. Some rallied outside the Danish capital’s US embassy. 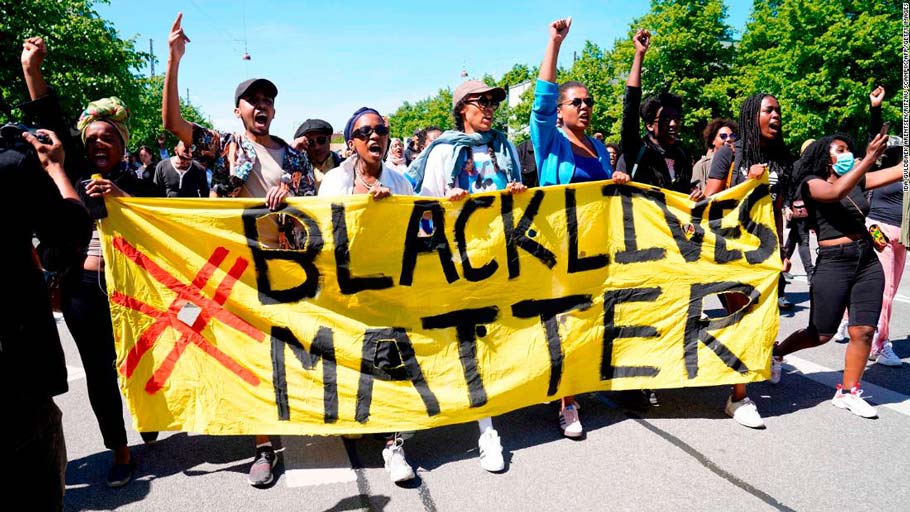 People protest during a Black Lives Matter demonstration in front of the US Embassy in Copenhagen, Denmark, on Sunday, May 31

In Milan, crowds held a flashmob near the city’s US consulate on Thursday. 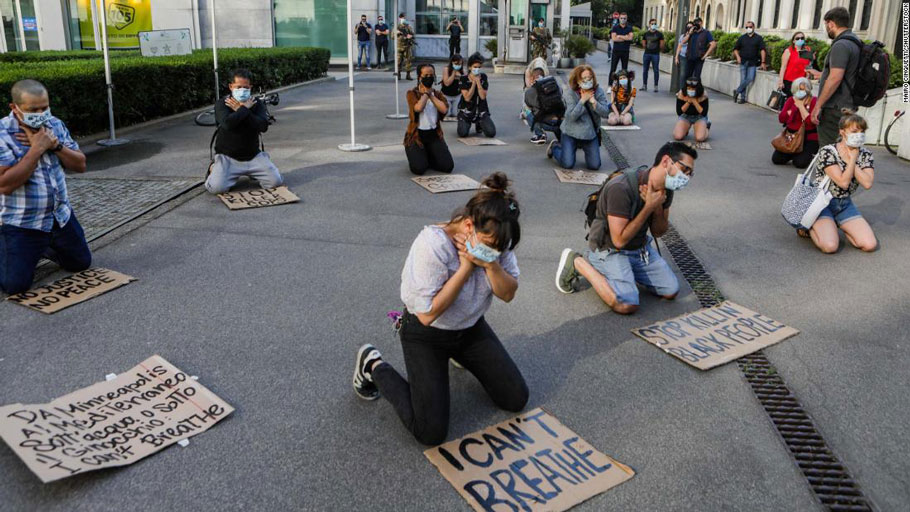 A flash mob gathers outside the American consulate in Milan, Italy on Thursday, May 28. 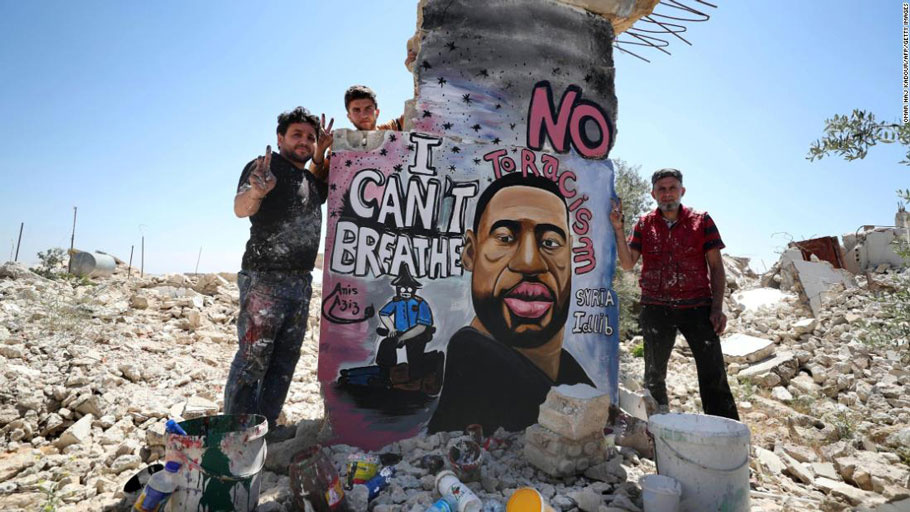 Aziz Asmar and Anis Hamdoun stand with their mural.

People protested outside the Guanabara Palace, the home of the state government, in Rio de Janeiro on Sunday, while in Sao Paulo, some brought signs showing solidarity with the US protests to an existing demonstration against President Jair Bolsonaro. 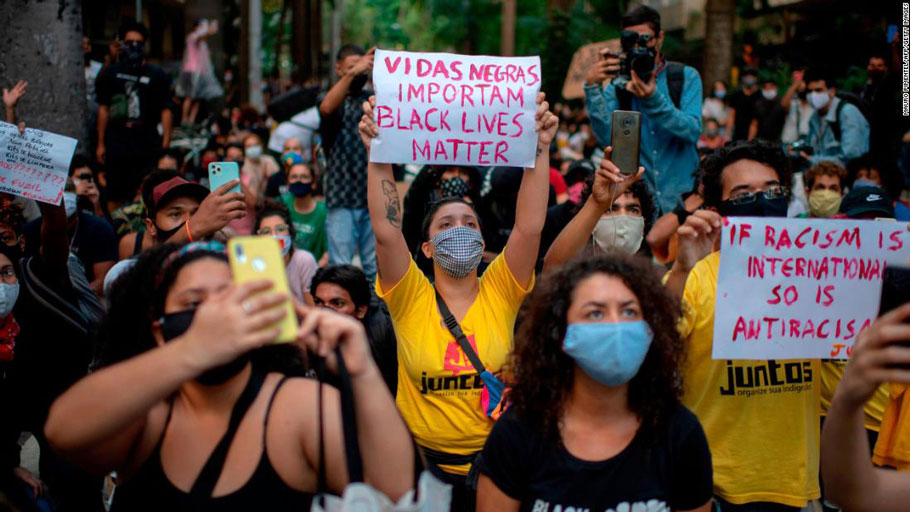 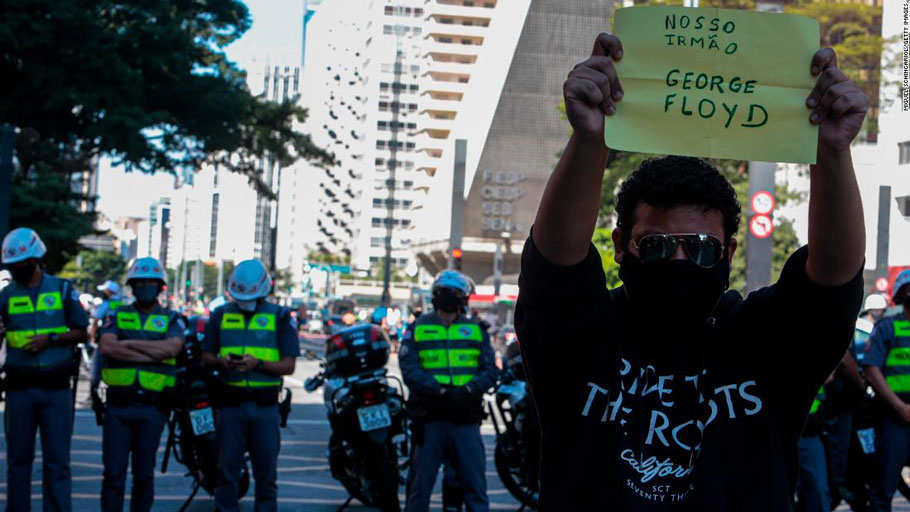 An activist at a rally against Jair Bolsonaro in Sao Paulo.

Portraits of Floyd were hung on the fence outside the US embassy in Mexico City, alongside flowers, candles and signs reading “Racism kills, here, there, and all over the world.” 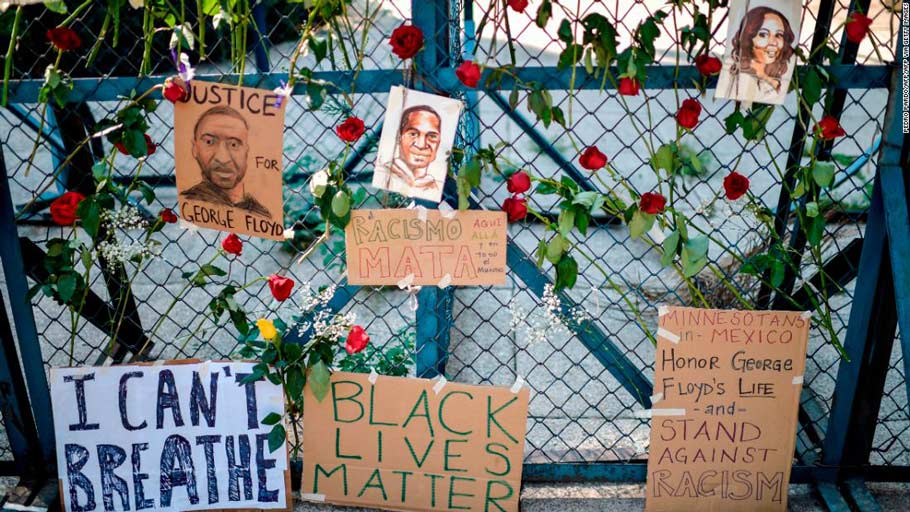 Signs and flowers outside the US embassy in Mexico City.

Demonstrators streamed down the streets of Dublin’s city center on Monday, chanting “I can’t breathe,” while a smaller protest was held in the suburb of Blanchardstown.

“People in Ireland are seeing what’s happening and we are just as angry and frustrated,” marcher Anna Herevin told CNN. “The protest was a show of solidarity with our friends in the US but also a united stand against endemic racism, which is a global threat.”

“In terms of solidarity protests with a movement in another country, this was the biggest I’ve seen,” she said.

Protests over Floyd’s killing were held in multiple locations across New Zealand on Monday. Thousands held demonstrations and vigils in cities including Auckland and Christchurch, while crowds braved the rain to hold a vigil in Wellington.

Several protests were also held in Canada during the weekend, as crowds rallied against alleged police brutality.

On Saturday, demonstrators in Toronto chanted slogans associated with the Back Lives Matter movement.

And on Sunday, thousands gathered in Vancouver in a show of solidarity with US protesters. 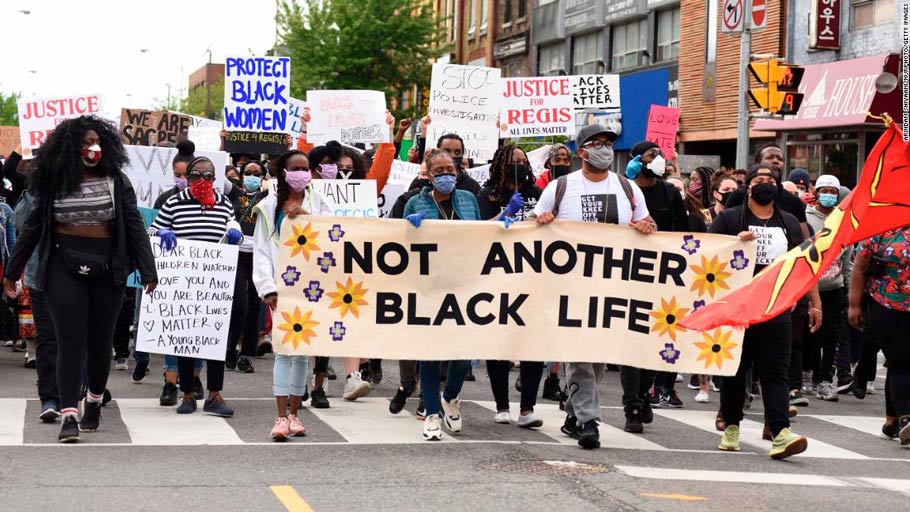 Protesters chanting slogans during a rally in Toronto on Saturday, May 30. 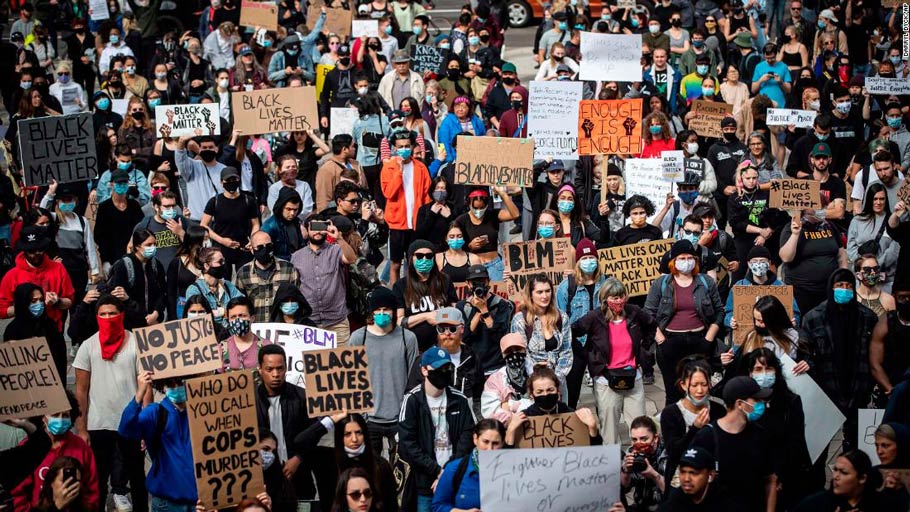 Thousands of people gather for a peaceful demonstration to protest against racism in Vancouver on Sunday, May 31.

Residents in Krakow, Poland, gathered at the city’s US consulate on Sunday evening. Some lit candles in a tribute to Floyd. 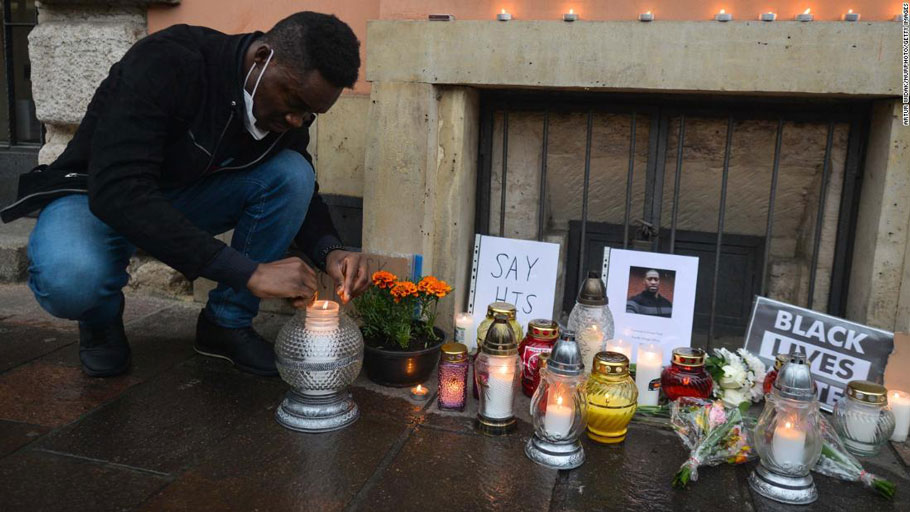 A man lights a candle in front of the US Consulate in Krakow on Sunday, May 31.

As well as expressing solidarity with US protesters, those gathered were also demonstrating against the treatment of minority and indigenous groups in Australia.

We are protesting for the hundreds of indigenoud people’s who’ve lost their lives to the hands of the government. We stand in solidarity to the protestors in the US. We are sick of witnessing murder on social media! #BLM #PROTESTING #PERTH pic.twitter.com/ZmbhIjBjx7

At least three more rallies have been planned in multiple Australian cities.

Further international demonstrations are expected in the coming days, as unrest in the US continues over Floyd’s death.