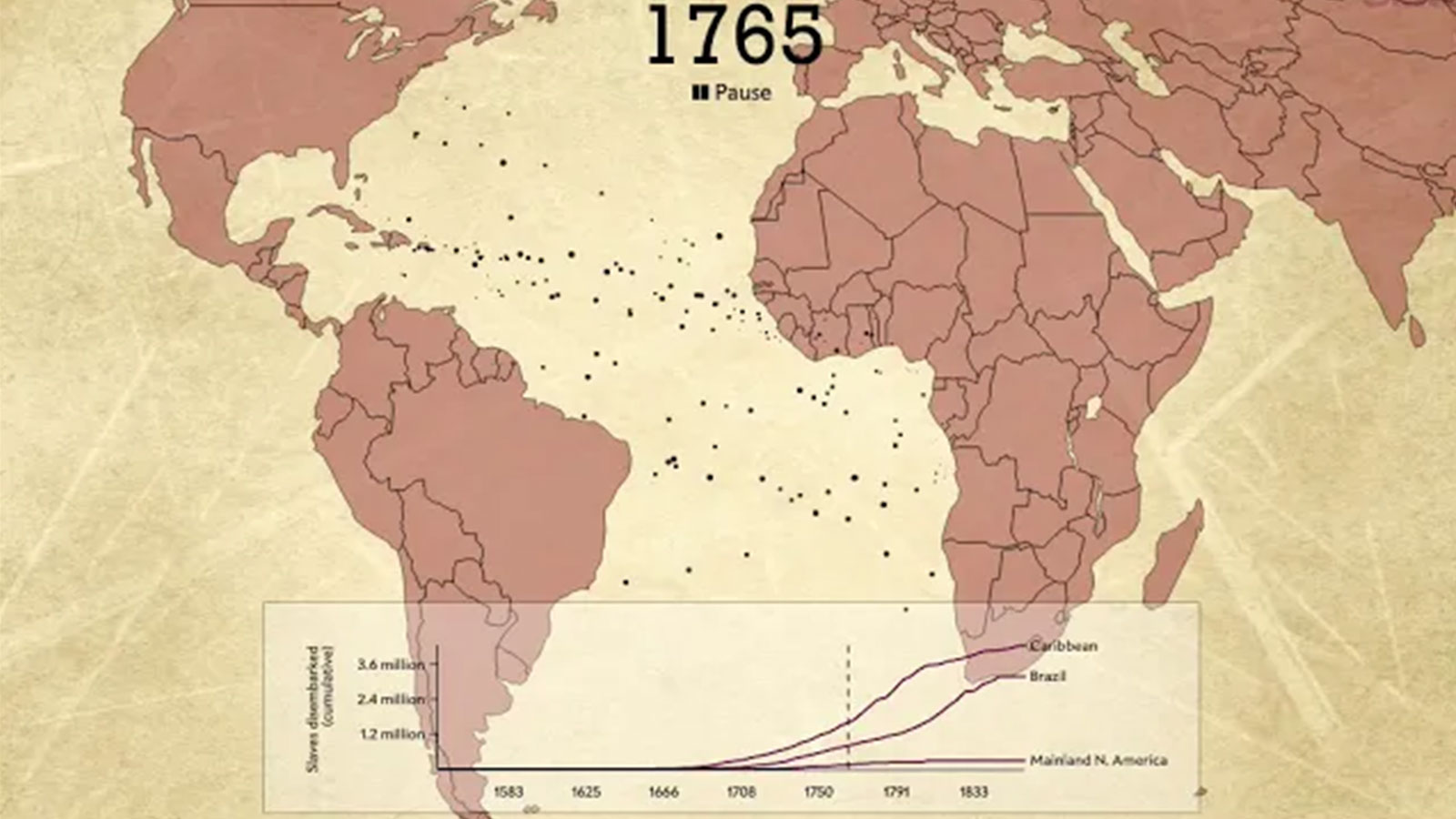 You Are Here: Home » Blog » Reparations » The Atlantic Slave Trade in Two Minutes

Above is a video version of the interactive map on Slate that demonstrates the scale of the transatlantic slave trade.

By the conclusion of the trans-Atlantic slave trade at the end of the 19th century, Europeans had enslaved and transported more than 12.5 million Africans.

Usually, when we say “American slavery” or the “American slave trade,” we mean the American colonies or, later, the United States. But as we discussed in Episode 2 of Slate’s History of American Slavery Academy, relative to the entire slave trade, North America was a bit player. From the trade’s beginning in the 16th century to its conclusion in the 19th, slave merchants brought the vast majority of enslaved Africans to two places: the Caribbean and Brazil. Of the more than 10 million enslaved Africans to eventually reach the Western Hemisphere, just 388,747—less than 4 percent of the total—came to North America. This was dwarfed by the 1.3 million brought to Spanish Central America, the 4 million brought to British, French, Dutch, and Danish holdings in the Caribbean, and the 4.8 million brought to Brazil.

This interactive, designed and built by Slate’s Andrew Kahn, gives you a sense of the scale of the trans-Atlantic slave trade across time, as well as the flow of transport and eventual destinations. The dots—which represent individual slave ships—also correspond to the size of each voyage. The larger the dot, the more enslaved people on board. And if you pause the map and click on a dot, you’ll learn about the ship’s flag—was it British? Portuguese? French?—its origin point, its destination, and its history in the slave trade. The interactive animates more than 20,000 voyages cataloged in the Trans-Atlantic Slave Trade Database. (We excluded voyages for which there is incomplete or vague information in the database.) The graph at the bottom accumulates statistics based on the raw data used in the interactive and, again, only represents a portion of the actual slave trade—about one-half of the number of enslaved Africans who actually were transported away from the continent.

There are a few trends worth noting. As the first European states with a major presence in the New World, Portugal and Spain dominate the opening century of the trans-Atlantic slave trade, sending hundreds of thousands of enslaved people to their holdings in Central and South America and the Caribbean. The Portuguese role doesn’t wane and increases through the 17th, 18th, and 19th centuries, as Portugal brings millions of enslaved Africans to the Americas.

In the 1700s, however, Spanish transport diminishes and is replaced (and exceeded) by British, French, Dutch, and—by the end of the century—American activity. This hundred years—from approximately 1725 to 1825—is also the high-water mark of the slave trade, as Europeans send more than 7.2 million people to forced labor, disease, and death in the New World. For a time during this period, British transport even exceeds Portugal’s.

In the final decades of the trans-Atlantic slave trade, Portugal reclaims its status as the leading slavers, sending 1.3 million people to the Western Hemisphere, and mostly to Brazil. Spain also returns as a leading nation in the slave trade, sending 400,000 to the West. The rest of the European nations, by contrast, have largely ended their roles in the trade.

By the conclusion of the trans-Atlantic slave trade at the end of the 19th century, Europeans had enslaved and transported more than 12.5 million Africans. At least 2 million, historians estimate, didn’t survive the journey. —Jamelle Bouie