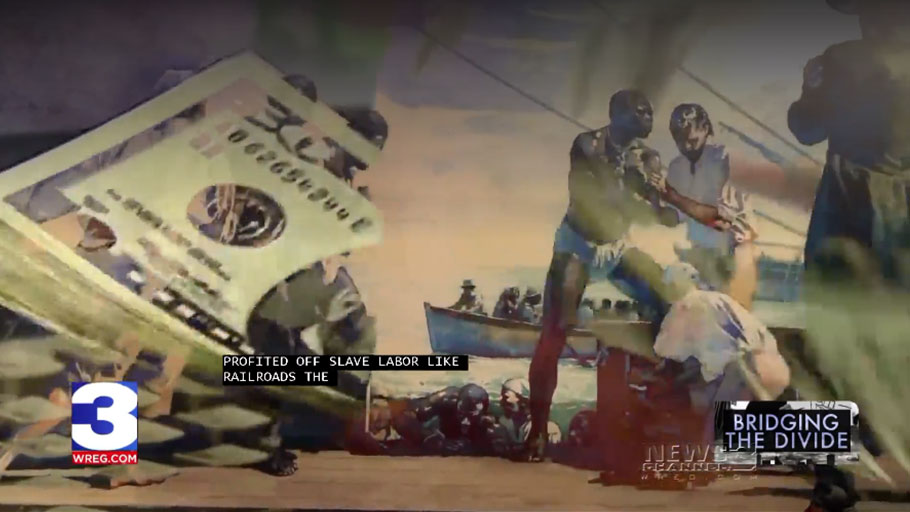 Bridging the Divide: Some see reparations as the answer for centuries of slavery

You Are Here: Home » Blog » Reparations » Bridging the Divide: Some see reparations as the answer for centuries of slavery

From the White House in Washington, D.C., to the foundation of the Mid-South’s economy, free labor from slaves helped build it.

The civil unrest and protests after the death of George Floyd called for an end to police brutality, but protestors also called attention to economic disparities experienced by many African Americans.

Protestors want change not only in policing but economic change. Some see the answer in reparations — making amends for slavery by giving African Americans the modern-day equivalent of the 40 acres and a mule their ancestors never received.

“So many things to unpack that we’re really trying to understand why we still feel the way we do. Why we feel we’re treated the way we are. Why there’s some systemic things that still happen,” said Faith Morris with the National Civil Rights Museum. “It’s because we’ve never, ever dealt with slavery.”

From the White House in Washington, D.C., to the foundation of the Mid-South’s economy, free labor from slaves helped build it.

“Black people in the United States worked for free for 266 years, however long slavery was, plus another hundred or so years in Jim Crow,” said Rev. Kenneth Whalum Jr. “They were not paid properly and of course, during slavery, they weren’t paid at all. So reparations is not about reconciliation. Reparations is about remuneration. Just pay me my money.”

Those pushing for reparations say things like welfare and set-asides did little to bridge the wealth gap between whites and blacks.

Memphis Congressman Steve Cohen chaired a hearing in Washington on a resolution to create a commission to study reparations.

“It doesn’t have to be the 20th century equivalent of 40 acres and a mule, which would be a condo and an SUV,” Cohen said. “It could be massive influxes of monies into public education, public health, public hospitals.”

Reparationists say government should fund reparations along with private companies that initially profited off slave labor, like railroads, the agricultural industry, insurance companies that sold slaveholder policies and banks that used slaves as collateral for loans.

“Every bank that was founded in Memphis and in the south got their start-up money with investments from slave owners,” Whalum said. “Especially Memphis. Our economy was founded on cotton. Cotton became king because of slavery labor.”

Some local governments like Asheville, North Carolina are moving forward with reparations, vowing to boost programs and improve neighborhoods where a majority of African Americans live.

Recently, Memphian Levar Jeffries launched the grassroots movement YOURS, which stands for You Owe Us Reparations Still.

“It’s time for them to pay up and I feel like the way to do that is start local within our own cities,” Jeffries said.

But that stance is not without its critics. Opponents argue that reparations would be unconstitutional, and would cost taxpayers trillions of dollars.