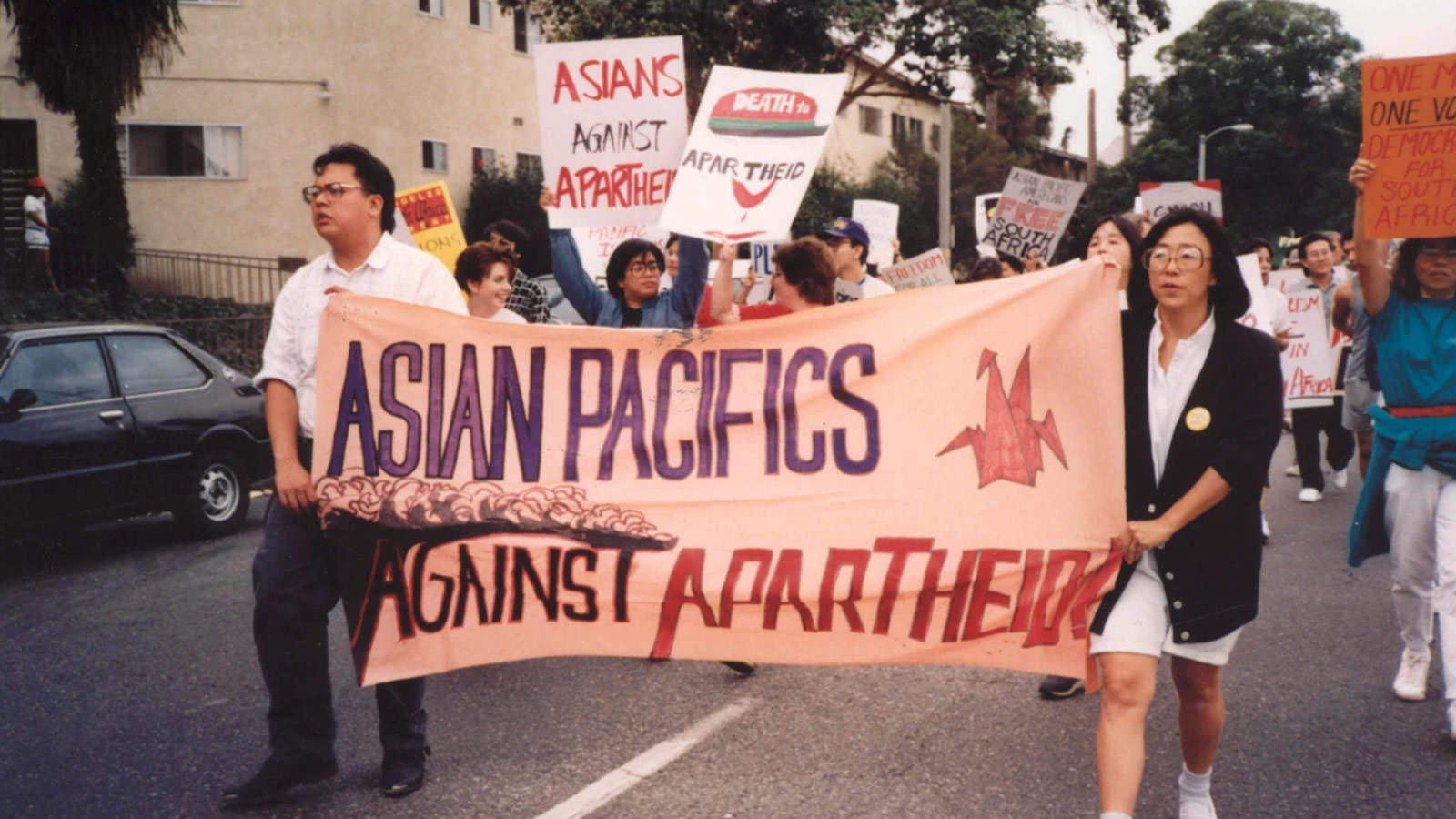 ‘Because we know it is possible’: Japanese Americans join fight for reparations

You Are Here: Home » Blog » Reparations » ‘Because we know it is possible’: Japanese Americans join fight for reparations

At a virtual town hall meeting in August, generations of Japanese American community organizers spoke alongside leaders from the Black reparations movement.

Called “Reparations Then, Reparations Now!” the meeting coincided with the 40th anniversary of the Commission on Wartime Relocation and Internment of Civilians hearings, which marked a turning point in the Japanese American redress movement.

“Just as Black Americans supported our community’s struggle for redress, we will strive to support and show solidarity with Black people as they fight for reparations today,” said Michael Nishimura, a 29-year-old doctoral student and organizer.

The event was hosted by the Japanese American social justice organizations Nikkei Progressives and Nikkei for Civil Rights and Redress, which are part of a growing coalition of organizations pushing for the passage of H.R. 40, the federal bill to create a commission to study reparations for Black Americans.

Originally introduced by Democratic Rep. John Conyers of Michigan in 1989, H.R. 40 has recently gained momentum amid the country’s reckoning over race and justice. The House Judiciary Committee advanced it in April, and the bill awaits a vote in the House.

Over the past year, Japanese Americans have been key proponents of H.R. 40, organizing letter-writing campaigns, webinars, phone-banking sessions and town hall meetings that have been “essential” to the effort, according to Kenniss Henry, co-chair of the National Coalition of Blacks for Reparations in America’s national legislative commission.

In addition to contributing people power, Japanese American organizers are sharing something perhaps more valuable: their first-hand knowledge of the redress process. 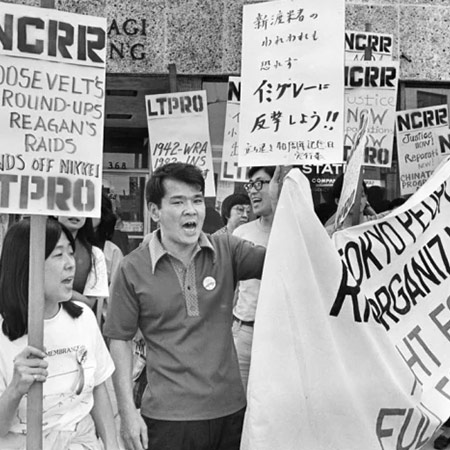 Kathy Masaoka, left, along with members of Nikkei for Civil Rights and Redress and Little Tokyo People’s Rights Organization march for reparations in Los Angeles in the early 1980s. Courtesy Kathy Masaoka

‘Some justice for what happened’

Japanese Americans are one of the first and only groups to receive redress from the U.S. government.

John Tateishi, 82, was sent to Manzanar, one of the United States’ 10 concentration camps, when he was just 3 and later became national director of the redress campaign for the oldest Asian American civil rights group, the Japanese American Citizens League. He traced the origins of the community’s reparations movement to the 1960s, when third-generation Japanese Americans, called sansei, had graduated from college and started challenging the older generation’s silence about World War II, which he said was the result of complex cultural factors and trauma.

“In that process began the reparations demand, that they wanted some justice for what happened,” he said.

Organizing on the ground in their own communities also helped fuel the redress movement. Veteran organizer Kathy Masaoka, 73, said the grassroots struggles against planned redevelopment, gentrification and evictions in Los Angeles’ Little Tokyo in the 1970s, for instance, birthed organizations that would go on to play key roles in the reparations fight.

Groups such as the JACL and Nikkei for Civil Rights and Redress started formally lobbying the government over the reparations, and by 1980, the Commission on Wartime Relocation and Internment of Civilians was formed to study the subject. In 1981, it held historic hearings in cities across the country.

Civil rights organizations including the American Jewish Committee, an early supporter, the NAACP and the Anti-Defamation League also played crucial roles in lobbying for the bill.

In 1988, the Civil Liberties Act was signed by President Ronald Reagan. The act included a formal apology for the “grave injustice” of internment, $20,000 checks to more than 80,000 survivors and a fund for public education on the subject of internment.

Tateishi received his reparations check by mail in 1990. 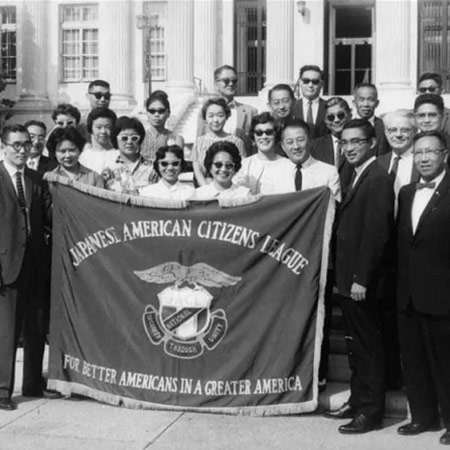 JACL members at the March on Washington, on Aug. 28, 1963. Japanese American Citizens League

Within a year of the bill’s passage, Tateishi started receiving requests to speak at meetings about Black reparations.

“I presented a caveat that what I was going to talk about may not have any application or interest in their strategies,” said Tateishi, author of the 2020 memoir “Redress: The Inside Story of the Successful Campaign for Japanese American Reparations.” “We faced a very different kind of situation than African Americans do and did with the American public.”

Solidarity between Japanese Americans and Black Americans around federal reparations is decades old. The civil rights movement “was deeply embedded in our early formation and early thinking,” Masaoka said of the Japanese American redress movement. Representatives of the JACL attended the March on Washington in 1963.

Opposition to the Vietnam War and the push for ethnic studies classes in California colleges were other uniting forces for African American, Asian American, Native American and Chicano students.

Black politicians — including the late Rep. Ron Dellums, D-Calif.; the late Rep. Mervyn Dymally, D-Calif.; and the Congressional Black Caucus — were also integral to the redress movement, said traci kato-kiriyama, an artist and organizer with the group Nikkei Progressives. In his historic testimony on the House floor in 1987, Dellums recalled watching his childhood friend, who was Japanese American, being taken away from his home.

“This Black American cries out as loudly as my Asian American brothers and sisters on this issue,” Dellums said, urging Congress not to strip key provisions from the Civil Liberties Act. 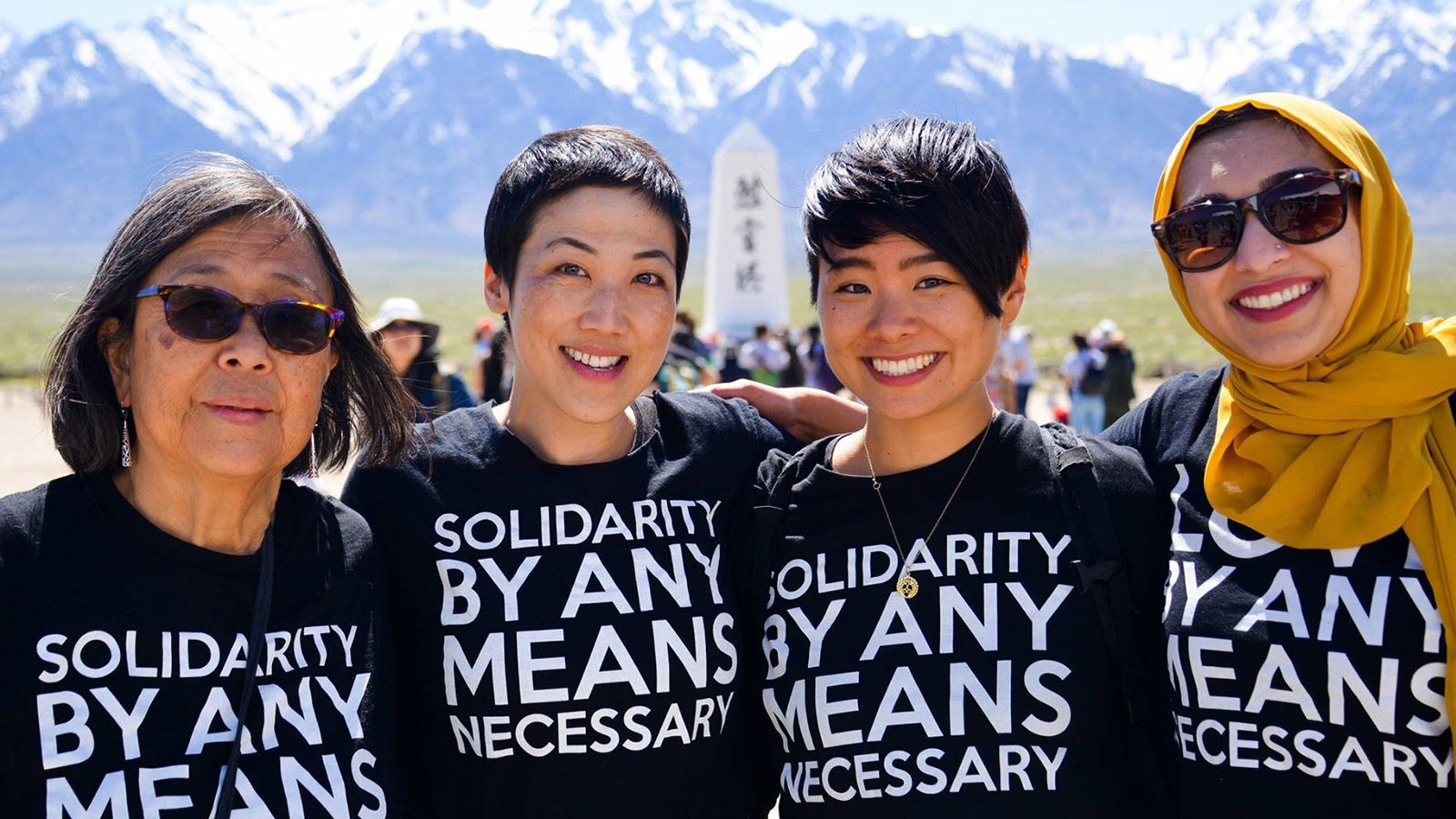 In fall 2020, the Japanese American organizations Nikkei for Civil Rights and Redress and Nikkei Progressives formed a joint committee to study reparations for Black people in the U.S.

Both groups had previously signed a letter entitled “Why We Can’t Wait,” along with 300 other civil rights, faith-based and social justice groups, urging legislators to pass H.R. 40.

One of their first actions as a coalition was drafting an open letter signed by 46 formerly incarcerated Japanese Americans, including former U.S. Secretary of Transportation Norman Mineta and “Star Trek” actor George Takei, to again urge House leadership to support H.R. 40.

Another partnership has formed between kato-kiriyama of Nikkei Progressives and Dreisen Heath, who leads the U.S. reparations work for Human Rights Watch. Since February, they have been meeting every Wednesday over Zoom as part of what they call the “reparations legislative working group.”

It’s designed to communicate the reparations strategy that’s being discussed among lawmakers, congressional staff and national advocacy organizations with organizers on the ground.

Usually, about 45 organizers attend the meeting, Heath said, including representatives from the JACL, American Civil Liberties Union, Color of Change, Movement for Black Lives and a number of faith organizations, including the National Council of Churches, Religious Action Center of Reform Judaism and Network Lobby for Catholic Social Justice.

H.R. 40, as well as its Senate companion, S. 40, is both a concrete political goal and what Heath called a “central organizing tool.” The coalition comprises over 450 different organizations that are committed to a national reparations movement.

“The local constituencies and grassroots organizing groups are extremely key to how we move this work forward,” Heath said.

When Masaoka testified in February during a House Judiciary Committee hearing on H.R. 40, she told lawmakers that Nikkei for Civil Rights and Redress and Nikkei Progressives support H.R. 40 because “one, it is the right thing to do; two, it is long overdue; and three, because we know it is possible.” 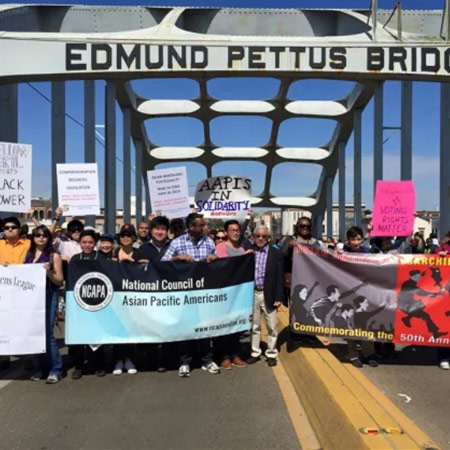 JACL members and other community organizers march in Selma on the 50th anniversary of the freedom march, on March 9, 2013. Kota Mizutani / Japanese American Citizens League

“We thought that was a pretty powerful statement to make,” said Masaoka, whose testimony was prepared with help from organizers at the JACL, the ACLU and the Japanese American social justice organization Tsuru for Solidarity. “It is what we as a community can really offer to the struggle and to the campaign.”

In the days leading up to the hearing, the community had been mobilizing. Tsuru for Solidarity organized a letter-writing drive and sent 300 letters, mostly from formerly incarcerated Japanese Americans and family members, to the House Judiciary Committee.

“It wasn’t a form letter,” organizer Lisa Doi, 30, said. “It was [an opportunity to] sit down, take out a blank piece of paper and write down why you support H.R. 40. It was really moving.”

Some of the letters also talked about the impact of receiving redress and how the movement, legislation and reparations initiative “started a healing process” within the Japanese American community.

In March, the coalition co-sponsored a virtual education session with the ACLU, the National African American Reparations Commission and the National Coalition of Blacks for Reparations in America, or N’COBRA, dedicated to discussing the overlap between the two movements. Recent months have also included an H.R. 40 town hall, a week of action and a 12-hour day of action that included three live email and phone-banking sessions. 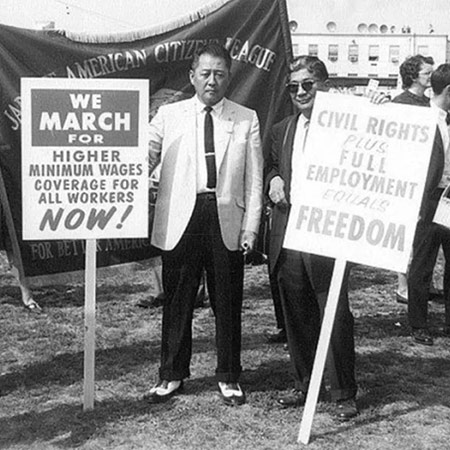 ‘Closer than we’ve ever been’

For Heath, the work is constant.

“When I close my computer, my mind doesn’t stop thinking about reparations,” she said.

She has testified in front of Congress twice regarding reparations, and she authored the 2020 report “The Case for Reparations in Tulsa, Oklahoma.”

“We were intimately aware of the Japanese American groups and all the work that they had done,” Henry said, but it was Heath who brought them formally into the fold.

In April, the House Judiciary Committee voted to send the bill to the House floor, where it awaits scheduling for a floor vote. Despite the grassroots momentum, the bill faces steep odds.

Organizers said it’ll be hard to push it through during an election year, and some Democrats have yet to sign on to co-sponsor the bill. And, they said, President Joe Biden has not signaled that he considers reparations a legislative priority.

But organizers are still optimistic.

“We’re closer than we’ve ever been before,” Heath said