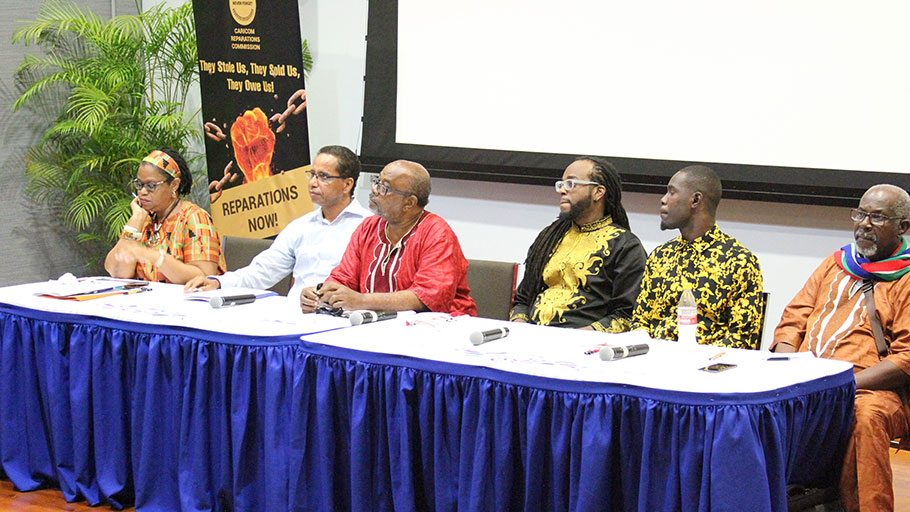 Moderator of the panel Dr. Hilary Brown and panelists at the discussion on reparatory justice.

As part of the CARIFESTA Symposium entitled “Journey Round Myself”, a panel discussion on CARICOM Reparatory Justice was hosted at the UWI, St. Augustine on Thursday August 22, 2019.

Dr. Hillary Brown, Programme Manager, Culture and Community Development at the CARICOM Secretariat,  in her capacity as moderator of the panel discussion, said one of its purposes was to make clear what was on the agenda for CARICOM in relation to the Reparatory Justice Movement. She also used the opportunity to explain the reasons that the governments of the Caribbean Community  decided to pursue reparatory justice for the CARICOM Region.

She said “the historical and crippling legacy of centuries of enslavement and its attending dehumanizing ideology of racism and blatant disregard for human rights of African people is fundamentally at the core of the contemporary reality of persistent poverty among the majority of people of African descent.”

She noted that it was the recognition of that damage and the exploitation of the wealth of the Caribbean to fuel the advancement of the industrial revolution in Europe that led the governments of CARICOM to make the decision in July 2013 to pursue reparations from the former European colonial nations.

She said the purpose of the panel was to explain why reparations was way more than money and more so the issue of acknowledging a crime against humanity, an apology and about repaying.

Ambassador Commissiong said the campaign for reparations sent a profound and invaluable message to all that there will be no impunity whatsoever for those who commit crimes against humanity. He stated further that the campaign for preparatory justice must include money but it must be more than just the money.

“Indeed our reparatory justice campaign must see us articulating and advancing an outwardly directed process at which we levy demands at the liable governments and institutions for compensatory money payments, yes money is important, inclusive of funds to finance a repatriation scheme but also developmental and debt cancellation programmes, transfers of resources and international institutional reforms that all go to make up a package of reparations payments”

Of additional note was the contribution from the youngest discussant on the panel Kibwe Copeland, President of the Ikemba Youth Organisation for Reparations from Guyana who emphasised that

“the accumulation of money without financial literacy and organizational strategy will lead you nowhere but back to the lack of and in need”.

The Caribbean Reparations Commission (CRC) is a regional body created to establish the moral, ethical and legal case for the payment of Reparations by the Governments of all the former colonial powers and the relevant institutions of those countries, to the nations and people of the Caribbean Community for the Crimes against Humanity of Native Genocide, the Trans-Atlantic Slave Trade and a racialized system of chattel Slavery.