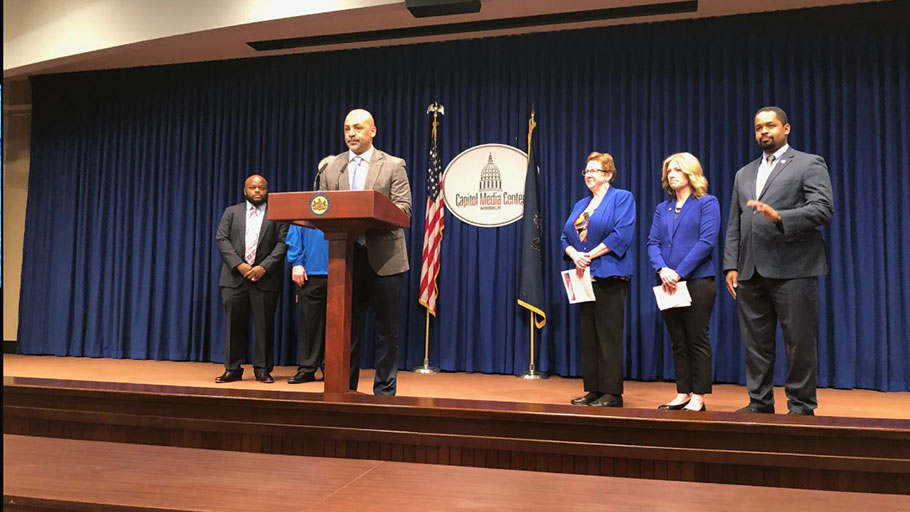 You Are Here: Home » Blog » Reparations » This Philly lawmaker wants Pennsylvania to offer reparations to its black residents

By Stephen Caruso, The Pennsylvania Capital-Star —

One Pennsylvania lawmaker is making his own case for reparations — not just for slavery, but for 400 years of institutional racism.

Rep. Chris Rabb, D-Philadelphia, released a memo last week asking for his colleagues’ support for a bill providing tax credits or other benefits to African Americans as well as “targeted geographic communities.”

Citing Pennsylvania’s own state Constitution, the memo says that “it is clear that the constitutional rights of an entire people have been limited, if not wholly denied based on the policies and inaction of their own state government for centuries.”

Reparations to African Americans for both 250 years of enslavement and then decades of racism from public institutions has been advocated on a national scale by public intellectuals like Ta-Nehisi Coates.

Congress saw its first reparations bill in 1989 and held its first hearing in a decade on the topic earlier this year. The Democratic presidential candidates have even begun to actively discuss plans to compensate descendants of enslaved people.

Rabb believes his proposal is the first offered on a state level. He also thinks it’s the proper jurisdiction.

“Slavery was not a federal law, it was a state law,” Rabb told the Capital-Star. “What state you were born in decided whether you were fully human or property.”

Slavery existed in Pennsylvania as early as 1639, and William Penn himself owned African slaves, preferring them to white indentured servants because “for then a man has them while they live.” Paradoxically, the Keystone State was founded by Quakers, like Penn, who would become early advocates against the institution.

At slavery’s peak in Pennsylvania, enslaved people made up 5 percent of the colony’s population — about 6,000 out of 120,000 people in 1750, according to the Pennsylvania Historical and Museum Commission.

In 1780, Pennsylvania passed the first law abolishing slavery in the United States, but as the PHMC notes, it was ultimately among the most conservative..

It only freed a Pennsylvania-born black person when they turned 28 years old. The Legislature tried, unsuccessfully, to repeal its own abolition in 1781.

But Rabb specifically said he doesn’t see his proposal as one to target just the horrors of slavery.

He cited recent examples of discrimination, such as redlining — or the systemic denial of federal mortages to African Americans by lenders — as well as histroic underinvestment in black communities, as necessitating his proposal.

Reporting from the investigative nonprofit Reveal found that despite a 50-year-old ban on housing discrimination, banks still routinely deny African Americans mortages in cities such as Philadelphia.

Rabb’s bill would specifically have Pennsylvania apologize for its complicity in white supremacy, and acknowledge that current racial inequities “are borne of racist public policy enacted into state and federal laws.”

It would also create a commission to financially quantify the damage to the black community from racism over centuries.

Rabb said his plan would specifically not allow for cash payments. He instead expects it to mostly rely on tax credits addressing public safety, education, or health among other topics.

As for the potential cost, Rabb did not cite a number but said his plan should attract support among fiscal conservatives. He argued a large jolt of investment now to poorer African-American communities could drive down the future spending “that make[s] our budget so big.”

Also, at a time when the state already OKs millions in tax carveouts for businesses, Rabb feels his proposal is the least he can do.

“If we can rationalize a half a billion* [dollars] in tax credits to our more privileged residents of the commonwealth, then we can absolutely entertain a program that provides financial redress for one of the most aggrieved communities in our country,” he said.

The bill, introduced to coincide with the 400th anniversary of a slave ship’s arrival in the Virginia colony, already has three co-sponsors, according to Rabb, including Legislative Black Caucus Chair Rep. Stephen Kinsey, D-Philadelphia, and Rep. Joe Webster, D-Montgomery.