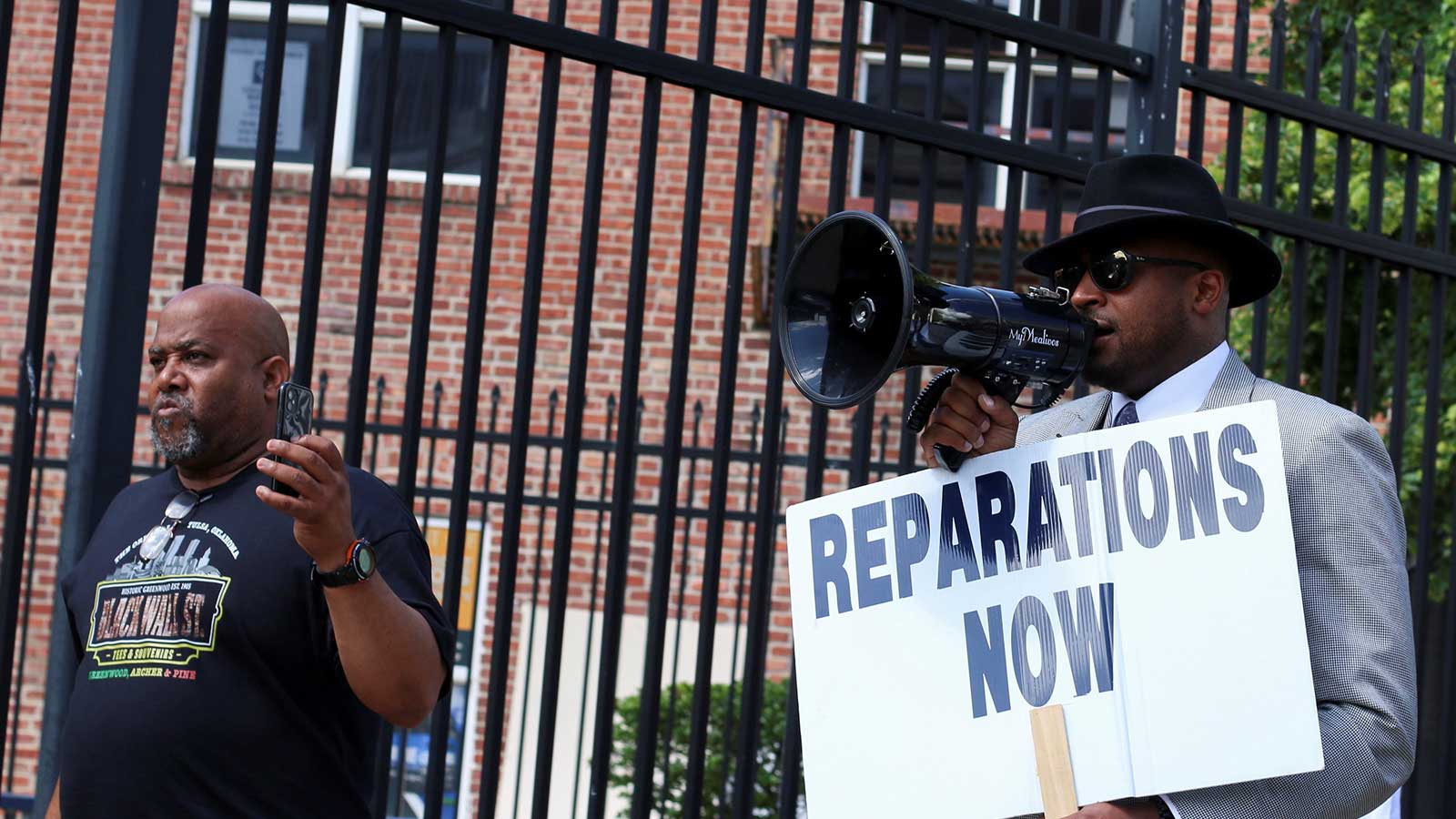 Reparations tied to specific events, like the Tulsa Massacre, reignite the push to address injustices

You Are Here: Home » Blog » Reparations » Reparations tied to specific events, like the Tulsa Massacre, reignite the push to address injustices

Black Freedmen in Tulsa hope the national attention on the Greenwood massacre means that more Americans are willing to reckon with the scale of the country’s sins.

Growing up, Kristi Williams always wondered why her great-aunt Janie Edwards avoided shopping in Tulsa. The family lived nearby in the suburb of Broken Arrow, which is about a 20-minute drive away. Tulsa offered more options, better deals, and the convenience of shops clustered together, but Aunt Janie refused to go. It would take years for Williams to understand her aunt’s aversion.

Williams and Edwards’ family are Muscogee Freedmen, descendants of formerly enslaved Black people who the Muscogee Nation brought with them from their ancestral land in the Southeast after they were forcefully expelled by the US government to Indian Territory in what is now Oklahoma. For Freedmen communities near Tulsa in the early 20th century, the Greenwood District was their economic, cultural, and community center. When white Tulsans attacked Greenwood in the 1921 massacre, they destroyed that center and killed hundreds of people. For Black Freedmen in Tulsa, however, the massacre is just one part of a long history of discrimination and violence they have experienced at the hands of the city, state, and tribal governments. Now, as the country shows a newfound willingness to memorialize the Tulsa massacre and reckon with America’s original sins, many Freedmen hope that their longstanding calls to address lingering injustices could finally lead to policies granting restitution to their communities.

While some recent policy proposals have sought overarching federal compensation for the harm caused by slavery, land theft, and other injustices, new proposals in Tulsa and elsewhere target local governments and institutions — part of a burgeoning movement across the country to seek reparations for specific, post–Civil War events and policies that harmed Black communities across the country. It marks a new chapter in the effort to attain compensation for the descendants of enslaved people. Reparations tied to specific events are “more possible” than a broad national reparations effort, said Brian Mitchell, a history professor at the University of Arkansas, and local efforts could serve as “a gateway to national reparations.”

Last year, a group of Greenwood survivors and descendants filed a lawsuit seeking reparations from seven defendants — including the City of Tulsa, Tulsa County, and the Oklahoma Military Department — for the damage caused by the massacre and the decades of neglect from government institutions that followed. The suit calls for a fund for survivors, descendants, and Greenwood residents, scholarship and public health programs, and a land trust, among other resources.

Another proposal, in Arkansas, seeks reparations for descendants of the 1919 Elaine Massacre, when white people massacred Black sharecroppers who were attempting to unionize in Phillips County.

“How do you fix a wealth gap without giving wealth to the people you denied it to?” said Mitchell, who has been trying to uncover evidence that might help that reparations case.

Violent atrocities aren’t the only target for local reparations calls. The Greenwood descendants’ complaint specifically references urban renewal policies — which displaced Black communities in favor of commercial development and interstates — as part of the ongoing harm against Black Tulsans. Athens, Georgia, Asheville, North Carolina, Portland, Oregon, Evanston, Illinois, and Winston-Salem, North Carolina are among the cities that have voted in favor of a variety of policies and resolutions that plan to apologize for harmful policies and address the racial wealth gap in some way.

Last week, the Tulsa City Council, inspired in part by the Asheville effort, passed a resolution that apologized for the massacre and committed to a community-led conversation on reconciliation. Rep. Hank Johnson of Georgia also introduced a bill that would allow Greenwood survivors and descendants to make court claims that have passed the statute of limitations.

As calls for reparations grow louder across the country, the questions over what constitutes reparations and how exactly the policies should be implemented loom larger.

William Darity Jr. and A. Kirsten Mullen, authors of From Here to Equality: Reparations for Black Americans in the Twenty-First Century, said that while local efforts are important, they should be considered “racial equity programs” rather than reparations because the piecemeal programs cannot provide adequate restitution for generations of harm and may be a distraction from the larger effort. Darity and Mullen are calling for the federal government to spend $11 trillion in direct payments to eliminate the racial wealth gap.

For Black Freedmen in Tulsa and elsewhere, such calls for restitution are nothing new but rather part of a long battle to restore rights and opportunities erased by racist policies. As descendants of both Native and enslaved people, Freedmen have been trying to repair the damage for decades. Damario Solomon-Simmons, the lead attorney in the Greenwood reparations suit, is a Muscogee Freedman who is also representing the tribe’s Freedmen in an ongoing suit against the Muscogee Nation to restore their tribal citizenship, which was stripped away in 1979 when the tribe adopted a new constitution that limits enrollment to “by blood” citizens, excluding Freedmen unable to trace their lineage to a Native ancestor listed on a 19th-century enrollment document.

“Justice for Greenwood, holistically, requires justice for Black Creeks,” he said, using the British name for the Muscogee Nation. “They are one and the same.”

Prior to the Civil War, the Muscogee Nation enslaved around 1,600 people. After the tribe freed its slaves in 1866, it granted them tribal citizenship, making them eligible for federal land allotments. One of these Freedmen was Janie Edwards’ grandfather, Jesse Franklin, who later served on the Supreme Court of the Muscogee Nation. The land allotments received by Franklin and Freedmen from other tribes totaled over 1 million acres in what is now Eastern Oklahoma. This land grew into a network of largely Black towns that sustained and benefited from Greenwood’s bustling economy. According to Solomon-Simmons, many Greenwood families were Freedmen, an often-ignored piece of history he believes needs more acknowledgment. “You don’t have Greenwood if you don’t have the Black Indians, point-blank,” he said.

By 1921, Greenwood was just one, albeit the wealthiest, of many towns and neighborhoods across Oklahoma that had large Freedmen populations and influence. Many of the towns around Tulsa were on Muscogee Freedmen land. Broken Arrow, where Edwards grew up, was one of these towns. “[Greenwood] was the heartbeat of those townships,” Williams said.

It wasn’t until she learned about the Tulsa Race Massacre in high school that Williams began to understand her great-aunt’s aversion to Tulsa. “It hit me like a ton of bricks,” she said.

Like many survivors of the 1921 Tulsa Race Massacre, Edwards was reluctant to revisit painful memories from that day. So Williams has had to piece together her story over the years from her mother and uncle.

On May 31, 1921, 17-year-old Edwards was on a secret date at the Dreamland Theatre on Greenwood Avenue. In the middle of the show, the couple heard shouting and shooting outside. Terrified, Edwards and her date ran. Amid the chaos of white men shooting, burning, and looting, they fled the theater and managed to escape Tulsa, not stopping until they reached Claremore, a town about 25 miles northeast of Tulsa. Although much of Greenwood was largely rebuilt within a few years, Edwards would not return to Tulsa for eight years. An estimated 40% of Greenwood residents also left the city permanently.

This legacy of trauma and fear still runs deep for Black Tulsans. In 2017, when Williams led a campaign to rename Tulsa’s arts district, which had been named after one of the perpetrators of the massacre, her family feared a backlash and begged her to abandon the effort. Williams believes this fear of white retribution comes directly from the massacre, passed down through the generations.

Once Greenwood was rebuilt, Black residents faced new forms of racial violence and discrimination, including police brutality, redlining policies that suppressed home values, and school segregation. For many years, however, Edwards and her family were able to rely on their Muscogee citizenship, which provided the family with both community and financial protection — like per capita cash payments — to help alleviate these traumas. Then they lost that, too. In 1979, the Muscogee Nation expelled its Freedmen citizens, barring them from tribal resources and benefits. Muscogee citizenship “served as a protection from white supremacy,” Williams said. “And then the tribe adopted that white supremacy.”

Since then, Williams, who was a child at the time, has been trying to recover that lost connection. Blocked from many tribal activities and events, Freedmen have organized to understand their history and rebuild some of the community that was lost. Williams has been working with other Freedmen to learn about her family’s land allotments, as well as joining with sympathetic Muscogee citizens to advocate for Freedmen from within the tribe. Some Muscogee citizens, however, assert that Freedmen do not belong, based on the belief that tribal citizenship should be tied to racial identity.

One of the challenges of reparations movements is the sheer volume of injustices, which is why Darity and Mullen believe that their approach, which accounts for the accumulation of injustice, is best. A national program would also avoid the sort of local resistance facing the Tulsa proposal. In a February 2020 interview, Tulsa Mayor G.T. Bynum said that cash reparations “divide the community on something we should be united on.” Last month, Bynum apologized for the massacre and said he supports a discussion about reparations, but doesn’t want to punish current Tulsa residents with a tax or similar policy to fund them.

But Mitchell and others who say that event-based reparations may be more realistic posit that localized policies could open the door for other communities to seek reparations from other atrocities — a process similar to what has played out among Native tribes for decades.

Tribes across the country have made specific claims of stolen or mismanaged land, but differ in their approaches to repairing that loss. In 1980, the US Supreme Court found that the US violated its own treaty with the Oceti Sakowin by claiming the Black Hills. The Oceti Sakowin were awarded over $100 million but refused the money, believing that accepting it would signal approval of the transaction. They want the land back. Other tribes, like the Muscogee Nation, have accepted multimillion-dollar payments. With this money, the Muscogee Nation disbursed per capita payments to citizens, but Freedmen stopped receiving those payments after they were expelled in 1979. Muscogee Nation Chief David Hill recently released a statement saying the tribe should start a conversation on the subject of Freedmen citizenship, but it has not taken any concrete steps. Reinstating Freedmen citizenship would require a vote from current tribal citizens.

Greg Robinson, a Muscogee Freedman, Greenwood descendant, and former candidate for Tulsa mayor, has broadened his calls for reparations beyond the proposal in Tulsa — he wants direct financial reparations from the Muscogee Nation, too.

With so many institutions and people complicit in the oppressions, the question of who should pay what is complicated, but increasingly urgent, he said. “Generations of people have advocated and been failed,” Robinson said. “How long can people just keep getting the door slammed in their face?”