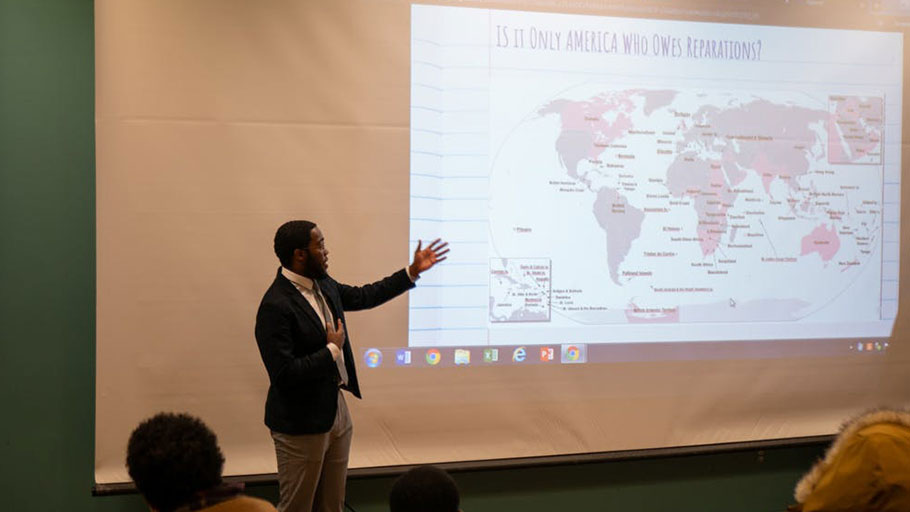 University at Buffalo students weigh in on reparations for slavery

You Are Here: Home » Blog » Reparations » University at Buffalo students weigh in on reparations for slavery

BSU and CSA presented videos by Marianne Williamson and Dr. Umar Johnson speaking about reparations. The reparations discussion was held at Student Union on Thursday.

Jeffery Clinton says he can’t forgive or forget the injustices his family and community endured throughout U.S. history.

Clinton’s great-grandfather acquired a “considerable” amount of property in Burlington, North Carolina but was lynched because the community was angry about his ownership, according to Clinton. The government seized the family’s property shortly after.

He said his family was left with nothing and his great-grandmother and her son, Clinton’s grandfather, were forced to become domestic workers in order to survive.

Clinton shares a similar history to many and on Thursday, the Black Student Union and the Caribbean Student Association led a discussion on how to make amends to those with similar stories. Over 20 people participated in the conversation, which was part of BSU’s observance of Black Solidarity Week. Economic reparations for the injustices of slavery have recently resurfaced in political conversations, with some 2020 presidential candidates expressing interest in pursuing reparation initiatives.

BSU and CSA defined reparations as “something done or given as amends or satisfaction” or “the making of amends for a wrong one has done, by paying money to or otherwise helping those who have been wronged.” After the Civil War, General William T. Sherman promised former slaves “40 acres and a mule.” President Lincoln and Congress approved the proposal and roughly 40,000 freedmen began settling on land confiscated from Confederate slave-owners. After Lincoln’s assassination, Johnson overturned the order and redistributed the land to its former owners.

Freedmen were left with none of the wealth their labor generated.

“I share a story with millions of other African-American descendants, who have been disenfranchised through violence, politics and economic practices,” Clinton said.

Other countries have distributed reparations, including Germany which paid over $70 billion to victims of the Nazi regime.

Participants in Thursday’s conversation largely agreed that the U.S. government should repay descendants of slaves. Participants expressed concern over how reparations would be spent and wanted to ensure compensation would be used to make long-term, positive impacts in the black community.

Nova Otieno, a junior biological sciences major and historian for BSU, said this conversation is an important step, because it helps people acknowledge America’s history of slavery and racism.

“The fact that a conversation is being had at least acknowledges the fact that slavery did happen,” Otieno said. “For so long, the U.S. has tried to sweep [its history of slavery] under the rug and not really give a formal apology, which I think is something that needs to be done.”

Some participants dismissed counter-arguments claiming American citizens shouldn’t pay for reparations, because they didn’t take part in slavery. Clinton argues that we all benefit from unpaid slave labor and that descendants of slaves need to be compensated.

“If you don’t want to pay for reparations because ‘you aren’t responsible,’ then you shouldn’t drive on the roads slaves built,” Clinton said.

Kevin Appiah-Kubi, a senior public health major, said he doesn’t need reparations, as his family immigrated to the U.S. from Ghana at the end of the Reagan presidency and didn’t face the “brunt of slavery.” But Appiah-Kubi believes the U.S. should repay descendants of slaves.

“I absolutely believe the government owes reparations to descendants of slaves because of the history of state-sanctioned violence,” Appiah-Kubi said. “We have seen communities collapse and usually the blame [is placed] on those communities instead of the government claiming responsibility.”

Keith Griffler, a professor in the Department of Transnational Studies, said discussing reparations is an important first step to “material change.” He hopes the conversation inspires institutions like the university to take action.

“Students have often taken the lead in social change, so it’s no surprise to see them doing so once again,” Griffler said.

“I would hope that the faculty and administration at UB would be inspired by the students and fully commit to the kinds of real, substantive changes that we see at other universities in the interests of discharging our own institutional responsibility to rectify past and present injustices.”

This article was originally published by The Spectrum, the University at Buffalo’s premier student publication.

Julian Roberts-Grmela is a features editor and can be reached at julian.grmela@ubspectrum.com and on Twitter @GrmelaJulian.