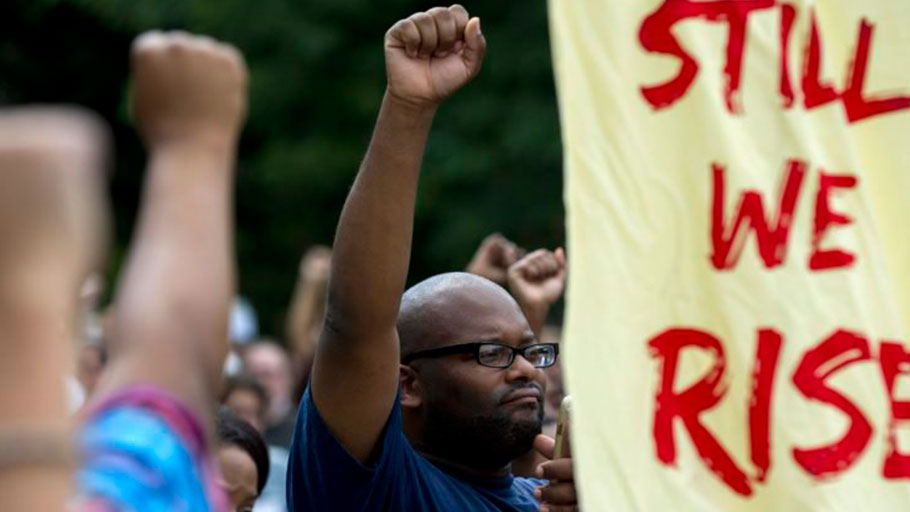 Black people simply do not see the same response to our complaints as we do when the victims of injustice include white people. Photo by Jeff Swensen, Getty Images.

There’s reckoning around our toxic culture of sexual abuse. But Black Americans are left waiting for remedies for white supremacy past and present. It’s time to #PayUp.

#MeToo and #TimesUp are more than hashtags. They are movements to hold sexual harassers accountable and to deliver justice to victims and survivors of sexual abuse and harassment. While the call for justice for women who have been sexually abused and harassed is long overdue, the response to that call is far different than the response to those calling for racial justice.

In this country, there is a stubborn resistance to acknowledging the attacks on the rights of Black people as worthy of restitution. Whenever Black people call for reparations to recognize the ongoing ramifications of this country’s systemic racism, the response is an offer to have a “dialogue.” White people want to talk about racism—at forums and roundtables—instead of taking meaningful action.

At the end of the Civil War, Union General William Sherman talked with Black leaders and promised reparations to some formerly enslaved people in the coastal South: 40 acres and a (loaned) mule per family. Hardly a just settlement, Sherman’s order was revoked by President Andrew Johnson. Former slaves got nothing except discrimination, abuse, and often death at the hands of white supremacists. Not only were Black people never paid with land—the land some did manage to buy was stolen from them by the racist policies created or supported by the government.

This is well-documented. But white people not only don’t want to pay, they don’t even want to think about reparations. For decades, former U.S. Rep. John Conyers (the Michigan Democrat who resigned after sexual harassment allegations) sponsored a bill to study the issue of reparations for slavery. It’s never made it to the floor of the U.S. House.

Black people simply do not see the same response to our complaints as we do when the victims of injustice include white people. Take the way our society treats the victims and survivors of sexual abuse and harassment. From Hollywood and the U.S. Congress to prestigious schools, survivors of sexual abuse and harassment are demanding a reckoning and, in some cases, receiving compensation for their suffering.

Yet, the same public outcry that has ignited institutional reckonings about sexual abuse and harassment is mute about concurrent racial abuse that includes rampant police killings, mass incarceration, housing discrimination, income inequality, and white nationalism and supremacy. The list goes on and on. For example, when reports of sexual abuse at the prestigious St. George’s School in Rhode Island sparked significant press coverage and social media pressure last year, reports of racism at the same school—including an incident in which white girls attacked a Black student and wrote racial terms over her body—surfaced but were barely noted.

At Fox News, it took white women speaking out against sexual harassment and sex discrimination before claims of racial discrimination were taken seriously, as a lawsuit first filed by two Black women expanded to include other women and men of color who complained of “plantation-style management” at the network.

We must pay attention to the victims of organized racism in schools, media networks, and all workplaces and public spaces. The only way for it to stop is for there to be real accountability for the practice of racism in all its forms. And we know that America learns its lessons best when there is a price to pay. When it hits the pocketbook, we see real change.

The only way to stop the ongoing poison of racism is through reparations. While reparations will not erase the ramifications of generations of racist assaults, they would at once compensate victims and educate perpetrators of racism.

Reparations can come in many forms. For instance, Blacks who suffered in predominantly white schools should have individual and group recompense just like white people who suffer abuse. Germany made reparations to those who suffered under the Nazis with billions of dollars in payments. Germany has also compensated Israel—not in aid but in reparations. For its part, the United States has not paid a penny in reparations to Black people or any African country. In fact, Black people in this country are told that there should not even be a conversation about any recompense or reparations for the past or present. Still the harm has been proven, so there must be a commitment to reparations through financial, policy, and other affirmative actions.

Our country must accept that diversifying white institutions does not erase the long history and continuing abuse of racism. Like sexual assault and abuse, racist assaults and abuse cause long-term physical and psychological damage. When I attended Hanover College in Indiana decades ago, I was one of only 12 Black students on an otherwise white campus. Back then, we called ourselves “the dirty dozen.” We coped with being schooled in a toxically racist, segregated environment by demeaning ourselves.

Imagine the damage done to us—12 Black people trying to fight back against racism by getting educated at an elite, white college. At the intersection of racism and sexism, my white instructors acted like I was reduced to an exotic sexual plaything. All 12 of us were expected to conform and contort to fit into a racist culture.

Diversity programs are one part of the answer to systemic racism. But we also need to stop and acknowledge the toll paid by victims of racist abuse. The United States must pause for a collective moment of recognition of the ongoing assaults against people of color—especially Black people. For Black people, time has been up when it comes to racism. From Ta-Nehisi Coates to Conyers, Black people have made a strong case for reparations and offered concrete steps we can take to compensate for racism. We don’t want to talk about it; we want—and demand—action.

As a Black woman in the struggle for equality for women, I know that racism is the stone wall that divides me from my white sisters. I also know that we don’t just need a ladder so we can climb over that wall. We need to take the wall down so we can walk the path to equality and justice together—regardless of race.

Women of color—especially Black women—suffer the dual oppressions of racism and sexism. That means that acts of sexism are magnified by racial discrimination and acts of racism are magnified by sexist discrimination. Every abuse we suffer as Black women is double-edged. We cannot disentangle the racism from the sexism when we’re abused. So why are movements for gender and racial justice not addressing both racism and sexism?

Many white people seem eager to move on when it comes to racism, even though we’ve not even scratched the surface when it comes to removing barriers to racial equality. And too many men of all colors want women to wait our turn while they deal with more important social justice issues—the ones that directly affect men.

What our country really needs is intersectional redemption—so we can make meaningful progress in ending racism and sexism. But truth-telling is always the first step toward redemption. It’s time to listen to the truth of Black people—of all genders—in the United States and to make amends by paying up.