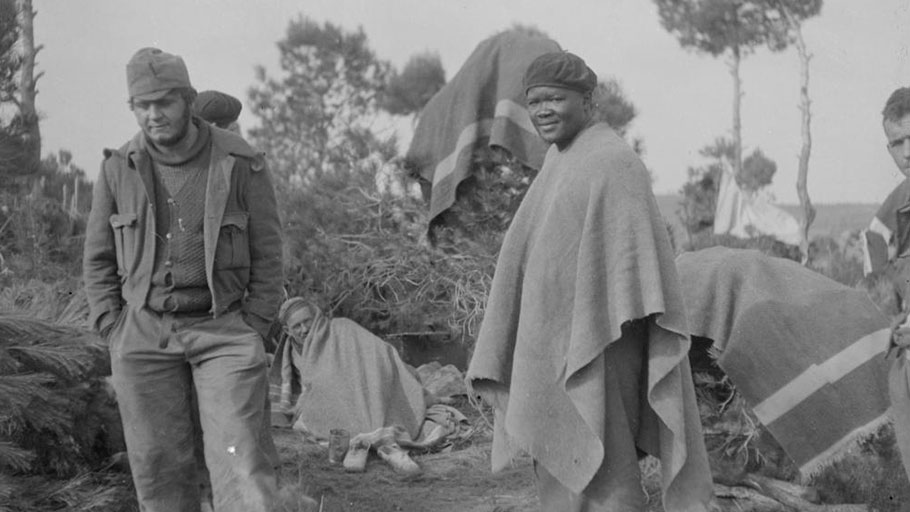 RadiAnti-fascist volunteer Canute Frankson explained his motivation in a letter home in 1937: “We will build us a new society—a society of peace and plenty. There will be no color line, no jim crow trains, no lynching. That is why, my dear, I’m here in Spain.”

Approximately 90 African Americans fought i Spain during the civil war that engulfed that nation between 1936 and 1939. The war became a proxy war for the European great powers as the Soviet Union supported the newly established Second Spanish Republic while Nazi Germany and Fascist Italy supported the anti-Republic conservatives led by General Francisco Franco. Although officially neutral, approximately 2,800 volunteers from the United States traveled to Spain as the Lincoln Brigade to support the Republic. In the article below, historian Peter N. Carroll tells the story of one little-known African American volunteer, Canute Frankson who left an account of his reason for fighting in the Spanish Civil War.

No one, except his friends, had ever heard of 47-year old Canute Frankson in 1937. He’d been born in the Parish of St. Catherine on the island of Jamaica, April 13, 1890. We know little of his early life but in 1917, he immigrated with his wife, Rachel, to the United States, settling for a while in Wilkes Barre, Pennsylvania, working as a machinist. He eventually moved to Detroit, developing his skills in automobile factories. There the crisis of the Great Depression brought him into the labor movement in 1934. Three years later, he was the chief mechanic of automobile repairs in Albacete, Spain, headquarters of the International Brigades fighting against fascism in the Spanish Civil War.

How had a middle-aged African American man gotten mixed up in a civil war in a distant country? Canute Frankson’s story is surely exceptional but not entirely unique as he participated with about ninety other African Americans—including some Afro-descendants from Cuba and Puerto Rico—who joined the fight for democracy before the outbreak of World War II. The American volunteers in Spain were known as the Abraham Lincoln Brigade, named after the president who had proclaimed Emancipation and who stood for the legal government of the United States in our own civil war.Poet

The Spanish Civil War began on July 18, 1936 and instantly captured international attention. When rebel army officers, led by General Francisco Franco, staged a coup against the elected leaders of the Republic of Spain, they found key allies in Nazi Germany and Fascist Italy. The dictators Adolf Hitler and Benito Mussolini saw Spain as an opportunity to test new weapons and extend their power through Europe. Britain and France, allies in World War I, dreaded a second war and hoped a policy of neutrality would keep the Spanish war from spreading. The U.S., under President Franklin D. Roosevelt, followed their lead. But Spain’s legal government needed assistance if it were to survive and pleaded with other counties for help. Soviet Russia, a minor power in the 1930s, eventually agreed to sell weapons to Spain. More important, the international Communist party urged individual men and women to leave their home countries to join the fight against the spread of world fascism.

During the 1930s, the U.S. population numbered 130 million, but only 2,800 citizens responded to the Spain’s plea for assistance. What was it that led African Americans like Canute Frankson to stick out their necks to save the Spanish Republic? Two months after he landed in Spain, Frankson set pen to paper to explain his motives for the folks back home.

“I’m sure that by this time you are still waiting for a detailed explanation of what has this international struggle to do with my being here,” he began. “Since this is a war between whites who for centuries have held us in slavery, and have heaped every kind of insult and abuse upon us, segregated and jim-crowed us; why I, a Negro who have fought through these years for the rights of my people, am here in Spain today?”

“Because,” Frankson continued, “we are no longer an isolated minority group fighting hopelessly against an immense giant. Because, my dear, we have joined with, and become an active part of, a great progressive force on whose shoulders rests the responsibility of saving human civilization from the planned destruction of a small group of degenerates gone mad in their lust for power. Because if we crush Fascism here we’ll save our people in America, and in other parts of the world from the vicious persecution, wholesale imprisonment, and slaughter which the Jewish people suffered and are suffering under Hitler’s Fascist heels. All we have to do is to think of the lynching of our people. We can but look back at the pages of American history stained with the blood of Negroes; stink with the burning bodies of our people hanging from trees; bitter with the groans of our tortured loved ones from whose living bodies ears, fingers, toes have been cut for souvenirs, living bodies into which red-hot pokers have been thrust. All because of a hate created in the minds of men and women by their masters who keep us all under their heels while they suck our blood, while they live in their bed of ease by exploiting us….”

The voices of other African American volunteers echoed Frankson’s sentiments. Vaughn Love, a light-skinned African American born in Tennessee, was living in Harlem in New York City, New York when he learned of the struggle in Spain. “I had read Hitler’s book, knew about the Nuremberg laws,” he told me in an interview, “and I knew if the Jews weren’t going to be allowed to live, then certainly I knew the Negroes would not escape and that we would be at the top of the list. I also knew that the Negro community throughout the United States would be doing what I was doing if they had the chance.” The Mississippi-born Eluard Luchelle McDaniels drew the same conclusion: “I saw the invaders of Spain [were] the same people I’ve been fighting all my life. I’ve seen lynching and starvation, and I know my people’s enemies.”

Most of the African Americans who made their way to Spain were members of the Communist party or an affiliated organization but their political views were tightly linked to their racial identity. Of all activist groups in America at that time, the Communist movement was the most explicitly opposed to race prejudice and discrimination. Consequently, the Abraham Lincoln Brigade was the first fully integrated military body in American history. In all previous wars, black soldiers served under the command of white officers, but in Spain African Americans met no prejudice and many individuals became respected officers. Among these, a Chicagoan named Oliver Law reached the highest rank as battalion commander. He died in battle, leading a racially mixed army at Brunete, Spain in 1937.

Langston Hughes, the celebrated writer and poet, went to Spain as a reporter for the African American press and wrote about the heroism of men like Commander Law, Milton Herndon, Walter Garland, and other volunteers, many of whom died or were wounded in battle. He also interviewed the Harlem dentist Arnold Donowa who gave his services to the medical corps and met a young nurse named Salaria Kea. Born in Georgia and raised in Akron, Ohio, she’d encountered her share of segregation and race prejudice. But in Spain she thrived in a non-racist atmosphere, where race prejudice among the Americans was treated almost as a crime. When the visiting writer Ernest Hemingway casually used a pejorative word, an American doctor punched him in the mouth.

After the foreign volunteers were demobilized from the International Brigades in 1938, African Americans were not eager to go home. “Spain was the first place that I ever felt like a free man,” remembered veteran Tom Page, a native New Yorker. The southern-born Crawford Morgan observed that in Spain “people didn’t look at me with hatred in their eyes because I was black, and I wasn’t refused this or refused that because I was black…and when you have been in the world for quite a long time and have been treated worse than people treat their dogs, it is quite a nice feeling to go someplace and feel like a human being.”

The Spanish Republic lost the war against fascism and Franco would rule as dictator until 1975. But the same activist spirit that led African American volunteers to fight against fascism in Spain moved them to continue their struggle during World War II and ever after. Nearly twenty black survivors of Spain served in U.S. armies, merchant marines, or health services. After Pearl Harbor, Vaughn Love enlisted the very next day, even though the military remained strictly segregated. “I knew that that was where I belonged,” he said. “I knew since the end of the war in Spain that we would have to face these bastards ourselves.” Nevertheless, both white and black veterans of Spain protested bitterly against race prejudice in the military.

The most successful was Sergeant Edward Carter II, who managed to join a combat unit in Germany near the end of the war. In March 1945, he took on an enemy squad, killed at least six and captured two while receiving many wounds himself. The Army awarded him a Distinguished Service Cross, the highest honor given any African American in World War II. Fifty years later, in a ceremony at the White House, President Bill Clinton added a posthumous Medal of Honor to his Carter’s laurels.

Although the defeat of Italy and Germany in 1945 sounded the death knell of international fascism, veterans of the Spanish Civil War, whites and blacks alike, understood that the struggle for justice would continue. Many of them served in the ranks of the civil rights movement and fought for racial equality in education, employment, and voting rights until the end of their lives.

As Canute Frankson finished his letter in 1937: “We will build us a new society—a society of peace and plenty. There will be no color line, no jim-crow trains, no lynching. That is why, my dear, I’m here in Spain.”