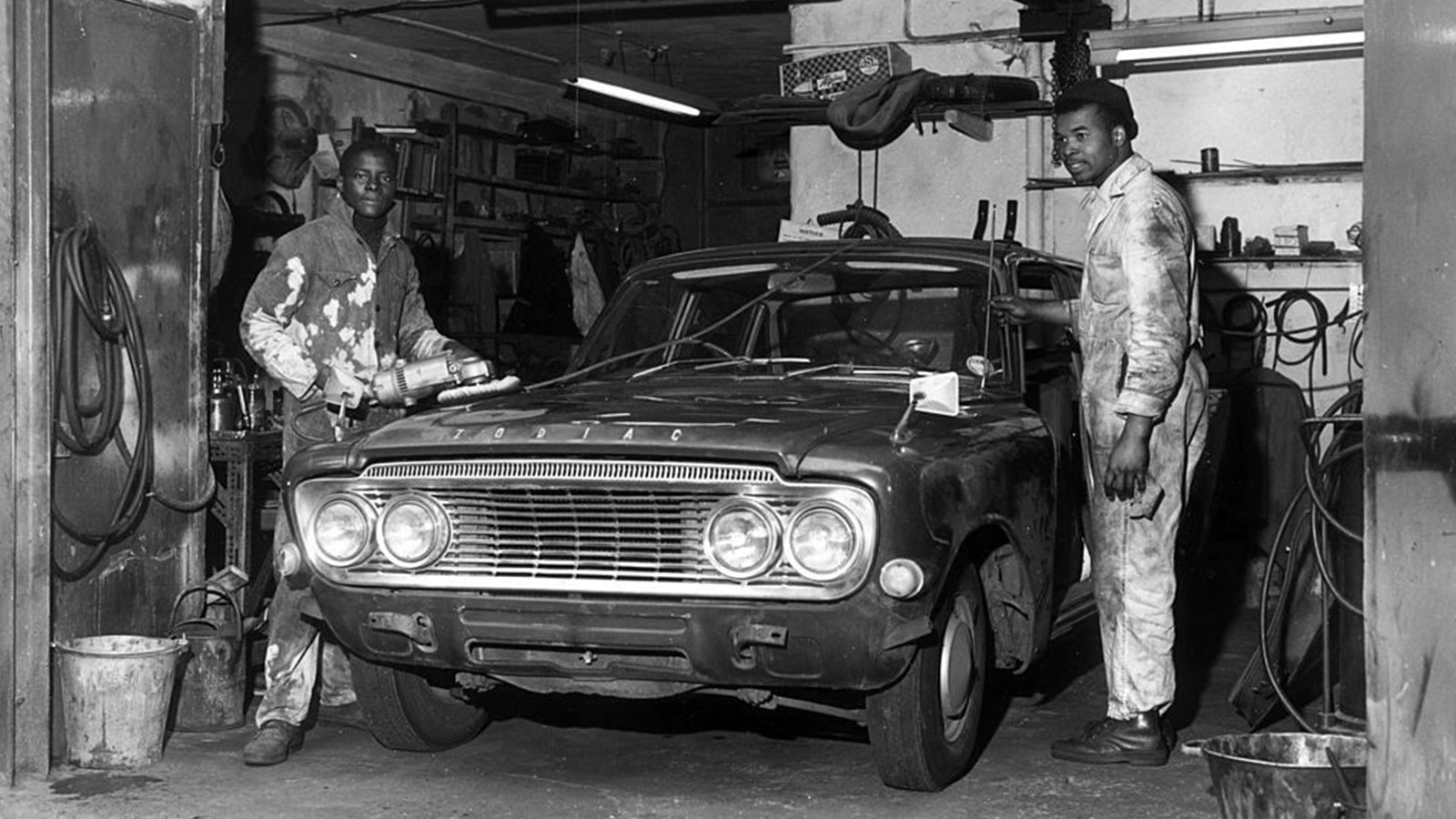 The Rise and Fall of the Blue-Collar Black Middle Class

You Are Here: Home » Blog » Editors' Choice » The Rise and Fall of the Blue-Collar Black Middle Class

Good union jobs built America’s blue-collar black middle class. But the percentage of black workers in manufacturing has been halved since the 1970s, yielding poverty and precarity. We can’t achieve racial justice without a movement to win those jobs back.

As we face a global crisis in logistics, supply chains and manufacturing capacity have become impossible to ignore. Suddenly these topics are all over US political discourse, prompting even mainstream news outlets to begin to question the legacy of globalization and deindustrialization.

But while current crises have turned up the volume, the discussion about the decline of US manufacturing employment was already underway. A defining feature of Donald Trump’s 2016 presidential campaign was a critique, however incoherent, of the North American Free Trade Agreement (NAFTA) and deindustrialization. That focus was arguably a major reason for his success.

Since Trump’s election, our major media institutions have mostly explored the loss of unionized, blue-collar manufacturing jobs as part of a broader attempt to understand the social and political angst of the so-called “white working class.” In this worldview, the future of blue-collar work is only of concern to white men. MSNBC host Joy Ann Reid expressed this idea when she described President Joe Biden’s Build Back Better legislation as a “white guy employment act.”

Lost in this conversation is the tremendous harm that deindustrialization has wrought on working-class black communities, and how fundamentally important private sector unions were — and still are — in the building of a stable, blue-collar black middle class.

An excellent recent study titled “The Unmaking of the Black Blue-Collar Middle Class,” coauthored by William Lazonick, Philip Moss, and Joshua Weitz, begins to set the record straight. The study tracks the emergence and decline of black employment in major unionized industries like steel, auto, electrical, and rubber.

The destruction of these union jobs has been a critical factor in accelerating the precarity that is common for so many working-class black people. Racial inequality in the United States cannot be addressed in any meaningful way unless we deal with this fundamental issue.

The entry of black workers into the major industrial labor unions was difficult and uneven. Employers routinely took advantage of many unions’ discriminatory practices by using black workers as strikebreakers, which served to further weaken the prospects of broad interracial working-class solidarity.

However, the explosive emergence of the Congress of Industrial Organizations (CIO) in the 1930s presented new opportunities. Black workers played major roles in unionization efforts and gained tentative footholds in mass production industries such as meatpacking, auto, electrical, and more.

The percentage of black workers in war production rose from 2.5 percent to 8 percent from March 1942 to November 1944. In a four-year period from April 1940 to April 1944, the employment of black men in the US civilian labor force jumped from 2.9 million to 3.8 million, and for black women 1.5 million to 2.1 million.

However, this progress was frustrated as the wartime industries demobilized.

A later surge in industrial employment for black workers was enabled by the parallel dynamics of a powerful labor–civil rights coalition and economic growth.

President John F. Kennedy signed the federal initiative Plans for Progress in 1961, which strengthened oversight of employment discrimination with federal contractors. By the time of the passage of the Civil Rights Act in 1964, the “Big Three” automobile companies (General Motors, Ford, and Chrysler) had signed Plans for Progress and committed to affirmative-action hiring of black workers. Following the creation of the Equal Employment Opportunity Commission in 1965, federal inspections became routine and helped to enforce this pledge.

Labor scholar Herbert R. Northrup, in his work The Negro in the Automobile Industry, explains the fortunate timing of this civil rights legislation:

The rise in civil rights emphasis in the 1960s, by a happy coincidence, came at a time of great prosperity in the automobile industry. Moreover, it happened when a natural turnover was occurring in the industry. Many employees hired around World War II, or earlier, were seeking retirement under the liberalized early and regular retirement programs in the industry. . . . The need for Negroes to obtain jobs and the need of an industry for new workers were never better coordinated.

By the mid-1960s the auto industry was the second-largest employer of black semiskilled production workers, surpassing one hundred thousand in 1966. These jobs had among the highest wages and best benefits packages in the country. In short, these jobs were fundamental to creating middle-class living standards for blue-collar black workers without college degrees.

As Lazonick, Moss, and Weitz observe:

Most of these workers had no more than high-school educations but had sufficient earnings and benefits to provide their families with economic security, including realistic expectations that over the coming decades their children would have the opportunity to move up the economic ladder to join the ranks of the college-educated white-collar middle class.

Similar trends in black employment occurred in other manufacturing industries such as steel and consumer electronics. By 1966, the steel industry had become one of the largest employers of black male manufacturing workers.

The Civil Rights Movement was keenly aware of the possibilities that these dynamics unleashed. It was during this same period that movement leaders like A. Philip Randolph, Bayard Rustin, and Martin Luther King, Jr launched the “Freedom Budget” for all Americans.

The vision came out of a basic understanding that civil rights gains would be rendered largely meaningless if black people continued to remain at the bottom rung of the economic system. After winning the Civil Rights Act of 1964 and the Voting Rights Act of 1965, an immediate pivot toward addressing issues of systemic poverty would be needed.

The program of the Freedom Budget amounted to a social democratic transformation of US society, with good union jobs at the center. It called for full employment through the creation of jobs in areas of social need such as housing construction, public school construction, environmental remediation, and all manner of public works projects.

Bayard Rustin envisioned an economic mobilization on the scale of World War II, writing in a 1968 book titled The Anatomy of Frustration:

In World War II we did not ask whether people were too black, or too old, or too young, or too stupid to work. We simply said to them this is a hammer, this is a tool, this is a drill. We built factories and sent these people into the factories. We paid them extraordinarily good wages and in two months they created the miracle of making planes that flew. We can find a peacetime method for doing this.

This vision was not merely a pipe dream. It was inspired by the very tangible gains black workers had already made in both overall manufacturing employment and the labor movement.

The defeat of both the Freedom Budget and the social democratic tendency in US politics forestalled the possibility of building on the progress black workers had made in the 1960s. As long as major investment decisions remained in the hands of capital, postwar economic gains would remain precarious.

As countries that had been destroyed during World War II began to recover and compete economically with the United States, the postwar settlement began to unravel. For black workers, the rise of the Japanese manufacturing industry and the response by their US counterparts was particularly decisive.

As Japanese companies in steel, auto, electronics, and tires became more productive, US companies tried to compete by cutting wages and laying off workers. Black workers were hit the hardest. Even so, the presence of unions, especially in the auto industry, helped stop the bleeding.

As the authors of “The Unmaking of the Black Blue-Collar Middle Class” explain, “Management-union agreements also gave priority to recently laid-off employees when staffing new plants. These agreements dampened the negative impact of plant relocation on many black auto workers.” But this only offered marginal relief from a long-term downward trend.

Worse still, Japanese auto companies deliberately avoided urban areas with large black populations when locating to the United States. This virtually shut out black workers from reaping any economic benefits from these industrial transformations. As the study explains:

Thus, in a key mass-production industry in the 1980s, blacks lost their jobs in unionized plants while they were largely excluded from participating in the new middle class blue-collar employment opportunities being offered by the Japanese transplants.

For many black communities, these once-stable union jobs have been replaced by grinding poverty, unemployment, and mass incarceration.

The Remaking of the Blue-Collar Black Middle Class

The chatter in political circles about racial justice has become ever more frantic, and yet at the same time increasingly unmoored from the underlying economic conditions of most black people’s lives. These conditions are only getting more abysmal. As we experience crippling inflation and stare down the barrel of a Federal Reserve–induced recession, the situation has become dire for all workers.

If the Left is serious about fighting racial inequality, then it needs to make the issue of family-sustaining union jobs in both the public and private sector a central priority. Efforts to rebuild the US industrial manufacturing base will need to be a component of this.

A worker-centered Green New Deal offers an opportunity to expand blue-collar manufacturing employment in an environmentally sustainable way. The needs in building public transit, retrofitting buildings, the expansion of clean energy, and much more are vast. Even just maintaining and improving existing infrastructure like roads and bridges is long overdue.

Pursuing these projects also offers the opportunity to massively expand building trades apprenticeship programs and include more workers of color. Campaigns to fully fund robust Career Technical Education programs in every public school are the kinds of initiatives we can envision.

There are still many existing private sector union fights that heavily involve black workers. The logistics industry is huge, ever-growing, and diverse. We don’t make much stuff in this country anymore, but we sure do move a lot of it. United Parcel Service (UPS) is the largest private sector employer in the country, employing over 340,000 unionized workers represented by the International Brotherhood of Teamsters. The UPS contract expires in August 2023, and a central goal of the union is to raise the standards for the disproportionately black and brown part-time workforce.

As “The Unmaking of the Black Blue-Collar Middle Class” demonstrates, labor unions have been instrumental in creating stability for non-college-educated working-class black people. Any strategy for racial justice that does not fight for full employment and a strong labor movement is not worthy of the name.