Med students send message with plantation photo: We are our ancestors’ wildest dreams

You Are Here: Home » Editors' Choice » Med students send message with plantation photo: We are our ancestors’ wildest dreams 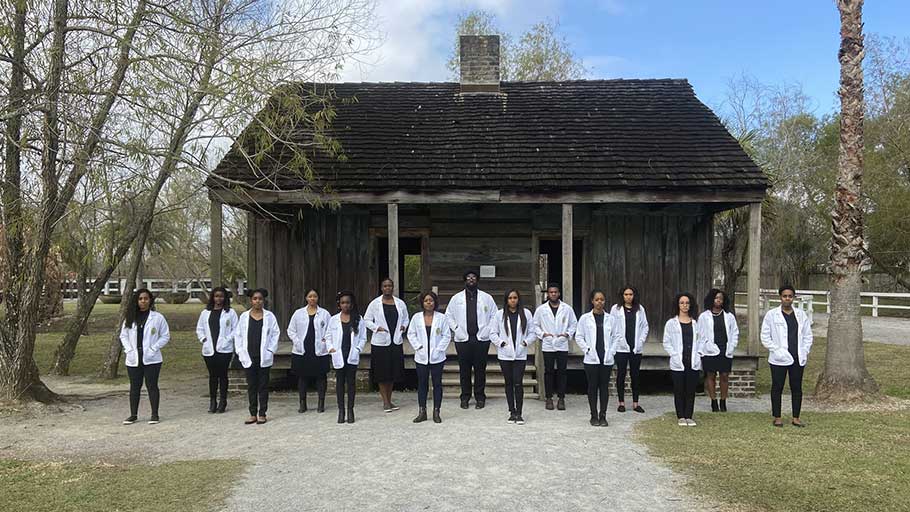 Sydney Labat, 24, and 14 of her Tulane University classmates posed at the Whitney Plantation in Wallace, La. Credit: Doyin Johnson.

More than a dozen medical students from Tulane University posed at the former slave quarters in the hopes of inspiring others.

By Mohammed Syed and Suzanne Ciechalski —

It wasn’t by chance that more than a dozen black medical students dressed in white coats and posed outside the slave quarters of a Louisiana plantation.

Russell Ledet and classmates from Tulane University planned the trip and photos at the Whitney Plantation in Edgard with the hope that others would be inspired by the images.

“Just thinking about being a black doctor in America. I think more people should see this,” Ledet, 33, told NBC News.

The second-year med student first visited the site with his daughter and a friend last summer and shared the impression it made on him with classmate Sydney Labat and others.

“I came back and talked about it with Sydney and the classmates. I said, ‘We should go in all black and our white coats.’ Everybody was on board,” Ledet said.

On Saturday, 16 members of Tulane’s Student National Medical Association made the trip from New Orleans to the former plantation, which is about 50 miles west.

“Seeing that many black students in training in one photo was striking. In a place that was dedicated to our ancestors and their struggles,” Labat, 24, said. “We knew this photo was going to make people stop … and really think. I can say for myself, I definitely got emotional throughout this experience.”

Labat shared an image of 15 of the students outside the slave quarters on Twitter that has since gone viral, garnering more than 20,000 retweets and more than 85,000 likes.

“Standing in front of the slave quarters of our ancestors, at The Whitney Plantation, with my medical school classmates. We are truly our ancestors’ wildest dreams,” Labat wrote on Twitter.

Ledet hopes that message gets to those who feel a lack of representation in and out of the classroom.

“There are babies, kids in school right now, and they don’t have these images in their classrooms,” he said. “They don’t have the image of someone black in a white coat. The first thing they see is a white guy.”

“These kids need somebody who looks like them in an image in their classroom,” Ledet said. “When that’s in their mind, that’s where their memories come from. They can be me.”

“You will rarely find an image of black medical students in a classroom, regardless of the makeup of the kids in the classroom,” Ledet said. “That’s our goal now, to get 100,000 of these pictures framed, and put them in classrooms.”

He said a few school boards have already said they’d be supportive of the endeavor.

The dean of Tulane’s medical school is proud of the students and their message.

“These are powerful images. Our students are our greatest strength and we applaud their sense of purpose, community and service,” Dr. Lee Hamm, Tulane University School of Medicine dean and senior vice president, said in a statement to NBC News.

This article was originally published by NBC News.