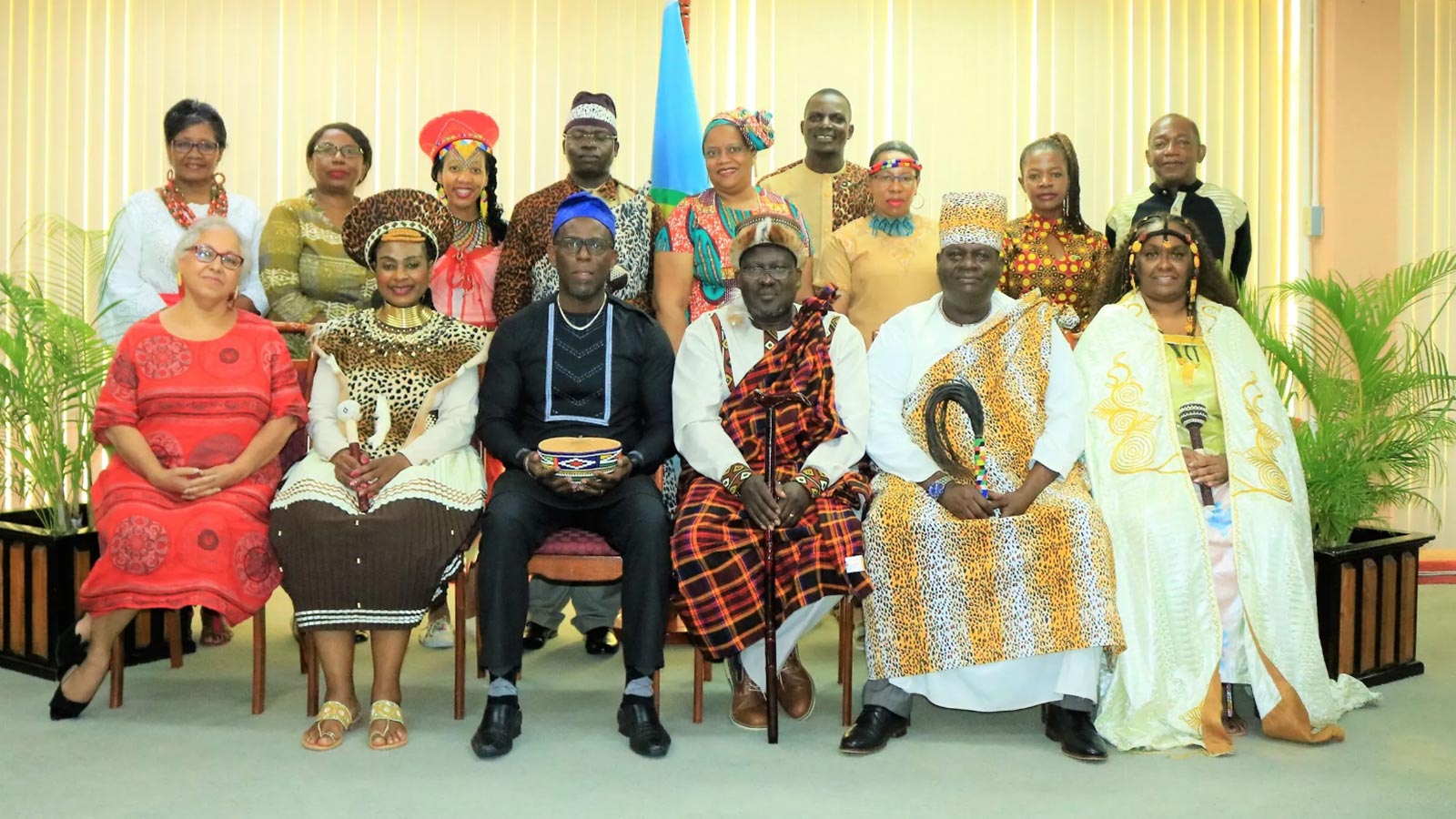 A symbolic reconnection between Africa and the Caribbean diaspora occurred on Friday 29 at the CARICOM Secretariat when Deputy Secretary-General, Dr Armstrong Alexis, welcomed a Royal Delegation from South Africa, Uganda and the Kingdom of Lesotho.

The visit was the result of collaboration between the CARICOM Reparations Commission and (AIDO) Network International of African Kings, Queens, and Chiefs in observance of Emancipation Day 2022 in Guyana and Antigua and Barbuda.

He said Emancipation is a poignant moment for recollection of “the triumph of our unrelenting resistance as a people over that dehumanizing crime against humanity of chattel enslavement, which our ancestors endured for over 300 years.”

“The observance is an opportunity to assert and remind that freedom is a fundamental human right of all people that should never again be compromised,” Deputy Secretary-General Armstrong added.

He relied on the words of reggae legend Bob Marley, to make the point that psychological emancipation is as important as physical freedom.

“Mental slavery continues to hold us back as a people from appreciating the greatness of our African and Caribbean civilisations and our remarkable contributions to humanity in every sphere of endeavour.”

“This is a time for emotional and psychological healing, for promoting pride in our African roots, and taking meaningful steps to bridge the divide among our people which was instigated and orchestrated over 400 years ago. We welcome your presence in our midst to continue this process of healing and rebirth,” Secretary-General Armstrong stated.

He told the African Royals about two significant events in CARICOM-Africa relations, recalling the designation of the African diaspora as the Sixth region of Africa in 2008, and the historic CARICOM-Africa Summit on 8 September 2021.

At that Summit, he said CARICOM Heads declared September 8th as Africa-CARICOM Day and agreed to increase collaboration in areas including culture, education, science, sports, trade and investment, air travel and maritime links.

“We, therefore, Your Royal Highnesses and Majesty, have a strong mandate and framework for the collaboration that AIDO and CARICOM are seeking to advance,” Deputy Secretary-General Armstrong told the delegation.

He informed the delegation of the Region’s pursuit of reparations for Native Genocide, the Trans-Atlantic Trade in Enslaved Africans, and Chattel Slavery through the CARICOM Reparations Commission.

“Chattel slavery is the worst form of enslavement, where the humanity of the enslaved Africans was denied, and they were subject to the worst forms of physical and psychological brutality imaginable. The repair and compensation we seek is fundamental to restoring dignity and addressing the pervasive inequalities endured by people of African descent which persists to this day,” Dr Alexis stated.

He invited AIDO to join CARICOM on the “mission for justice and development since the partnership with Africa is critical to our success in achieving reparatory justice.”

“We hope, Your Royal Highness, that you will commit to championing the reparations claim through your network of respected community and spiritual leaders and I thank you on behalf of the Chairman of the CARICOM Reparations Commission, Professor Sir Hilary Beckles, for the collaboration that you have already embarked on with the Commission, which has resulted in your visit to the region,” Dr Armstrong said.

For their part, members of the delegation underscored the importance of building an air bridge between Africa and the Caribbean for greater people-to-people contact, trade, and investment.

They informed the CARICOM Secretariat officials that AIDO is a global network of cultural institutions and royal houses both in Africa and the diaspora which seeks to provide a platform for dialogue, unity, and development. Its mission is to build a network for promoting and using culture as a vehicle to achieve social cohesion through the respected and honoured chiefs, the delegation said.

His Highness Eganda lauded the connections AIDO made in the Region through the CARICOM Reparations Commission and National Reparations Councils. He underscored the importance of teaching African history in schools, cultural exchanges, and the coalescing of culture and economic development through the guidance and wisdom of cultural leaders.

The youth among the delegation, Her Royal Highness Princess Precious Lindiwe Nthibogelang made a poignant intervention in which she highlighted the importance of young people pursuing purpose-driven lives, their education both culturally and academically, socialization of children by the whole community, and for young people to led healthy lives, by using food as medicine.

New Assistant Secretary-General for the Directorate of Human and Social Development, Ms Allison Drayton also welcomed the delegation to the Secretariat noting that Princess Lindiwe’s sentiments resonated with CARICOM Secretariat’s trajectory on youth development and its work to reduce the scourge of Non-Communicable Diseases through advocacy for people to consume healthy diets. She expressed optimism that deepened relations between the CARICOM Reparations Commission and AIDO could result in exchanges of best practices in that regard.

Programme Manager for Culture, Youth and Gender within the CARICOM Secretariat, Dr Hilary Brown, underscored her pleasure with the fruits of months of discussions between the CARICOM Reparations Commission and AIDO which culminated in the delegation’s visit to Guyana and Antigua and Barbuda.

As Programme Manager for Culture, Youth and Gender, she said it was very inspiring to listen to Princess Lindiwe express her passion for youth development and culture.

“Culture is such an important unifying force. It is the fabric and the connection between Africa and the Caribbean. It is certainly what brings the Caribbean together and is one of the foundation principles of our regional integration movement. It is an important part of what makes us feel like family, and it has that same value and importance in bringing the Caribbean and Africa together,” Dr Brown said.

Referencing Prof. Rex Nettleford of Jamaica, Dr Brown said “the excellence of the Caribbean’s cultural expressions is rooted in the African presence in our culture,” adding that it is a powerful platform for deepened relations between Africa and CARICOM.