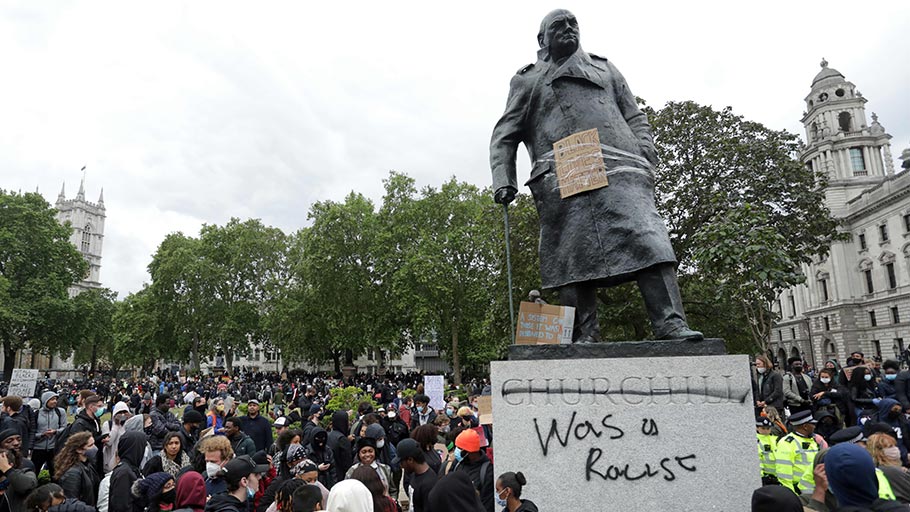 U.S. protests push Europe to face its own histories of injustice

You Are Here: Home » Blog » News & Current Affairs » U.S. protests push Europe to face its own histories of injustice

Edward Colston was a 17th-century English merchant who rose to the position of deputy governor of the Royal African Co. His family became fabulously wealthy as a result, profiting from the company’s role in the British trade of African slaves to the New World. Under Colston’s watch, about 84,000 Africans were shipped to lives of bondage and misery. An estimated 19,000 of them perished during the grisly Middle Passage, their corpses tossed into the Atlantic.

On Sunday, it was Colston’s turn to get dumped into the water. Inspired by U.S. protests over the death of George Floyd, demonstrators in Bristol — the seaside port from which Colston generated his fortunes — dragged the 19th-century bronze statue that had been erected in his honor off its pedestal. In scenes that went viral on social media, the protesters then rolled the stricken monument to the waterfront and hurled it over the railings to ecstatic cheers.

The irony — and, some would say, poetic justice — of the moment was not lost on observers. “Colston lies at the bottom of a harbor in which the ships of the triangular slave trade once moored, by the dockside on to which their cargoes were unloaded,” wrote British historian David Olusoga.

Anti-racism protesters tore down and threw a bronze statue of 17th century slave trader Edward Colston into a river in Bristol, England on Sunday as thousands demonstrated across the UK over George Floyd’s death https://t.co/aWXfAaMujd pic.twitter.com/1ZLwYdOjU3

British Prime Minister Boris Johnson wasn’t so sanguine about the spectacle. He described it as a “criminal act” and argued that there were other avenues for people to seek the statue’s removal. “The PM absolutely understands the strength of feeling,” said a spokesman for Johnson, “but in this country we settle our differences democratically, and if people wanted the removal of the statue there are democratic routes which can be followed.”

Colston’s statue was hardly the only one under protester scrutiny. In London’s Parliament Square, a statue of Winston Churchill was vandalized, with activists scrawling graffiti that labeled the revered former prime minister a racist — what most honest historians would concede is an objective fact. But Nigel Farage, the far-right British campaigner, suggested that incident and other scenes of unrest marked the birth of a “new form of the Taliban” in Britain.

That’s a line of argument more common than you’d think. On both sides of the ocean once traversed by Colston’s slave ships, conservatives still insist that calls to remove monuments connected to bloody legacies of slavery and colonial exploitation are acts of intolerance, antithetical to the telling of history itself. They conveniently disregard the widely celebrated removal of statues of Lenin and Stalin in the former Soviet world or, indeed, the U.S.-aided toppling of the statue of Iraqi dictator Saddam Hussein.

Moreover, they ignore an argument that’s taken for granted by most historians: That the erecting of statues is itself a narrative act of history, aimed mostly at the glorification of the people the statues depict. A statue’s toppling, often under circumstances of widespread popular approval, is also an act of history.

“Whatever is said over the next few days, this was not an attack on history,” Olusoga wrote in the Guardian about the scenes in Bristol, which followed long-standing demands for the statue’s removal. “This is history. It is one of those rare historic moments whose arrival means things can never go back to how they were.”

That’s a call being felt in the United States. In Richmond, the capital of Virginia and former seat of the Confederacy, protesters have converged on the city’s stretch of Confederate monuments. Now, state and municipal authorities have announced plans to finally remove at least some of those statues, which commemorate insurrectionists who championed slavery. Separately, the U.S. Army is weighing renaming some bases named for former Confederate commanders.

A similar, though slower, phenomenon is at work in parts of Europe, too. On Sunday, protesters in Brussels set their sights on traces of the country’s colonial past. As my colleagues reported, “they crowded in front of the Palace of Justice — a symbol both of the rule of law and injustice because its construction allowed the 19th-century monarch King Leopold II to dominate the Brussels skyline while he presided over a brutal rule in Congo in which as many as 10 million people died.”

This is no small matter. Brussels, with all its E.U. institutions, is the de facto capital of Europe, and by extension the heart of the global liberal project. Yet statues to Leopold still adorn the city and other parts of Belgium.

“It’s as though they still had statues of Hitler in Germany,” said Jenny da Costa, a 35-year-old Brussels resident, to The Washington Post. “I can’t even understand why those statues are still here. He is a murderer.”

Léoplold is accused of heinous crimes there, over a century ago

Will what has happened in Bristol today be replicated elsewhere? pic.twitter.com/Z0FUQS5cTS

It speaks of a broader European blind spot: Though many on the continent look in horror at the United States’ police violence and explosions of racial unrest, fewer feel the need to atone for the imperial systems of injustice that in many cases built the economic and societal foundations of their own modern nation-states.

On Tuesday, authorities in the Belgian city of Antwerp removed a statue of Leopold that had been graffitied by protesters. Antwerp’s mayor said there were no plans to restore it.

Of course, no society’s heritage is free of hate, to invert the slogan deployed by American defenders of Confederate monuments. Societies once under the European colonial yoke have to reckon with their diverse histories of violence and discrimination. But the conversation in Europe is gaining steam as the voices of minority communities — in many instances directly connected to that colonial past — grow louder and more confident.

In recent years, European museums have started returning artifacts to the countries from which they were stolen. In a few cases, European governments have extended apologies or qualified statements of contrition to specific communities affected by the misdeeds of empire.

And many want more to be done. In Britain alone, there are calls for a restructuring of school history curriculums, which conspicuously leave out much of the dark side of its colonial past, as well as for new institutions that more thoroughly examine the country’s imperial legacy.

“I see no good reason to oppose the fixing of explanatory plaques on streets named after plantation owners or merchants whose wealth was largely owed to slavery,” wrote center-right Scottish columnist Alex Massie. “History cannot be denied but must be owned in the round. Look on our works, we might say, but do not forget.”

This article was originally published by The Washington Post