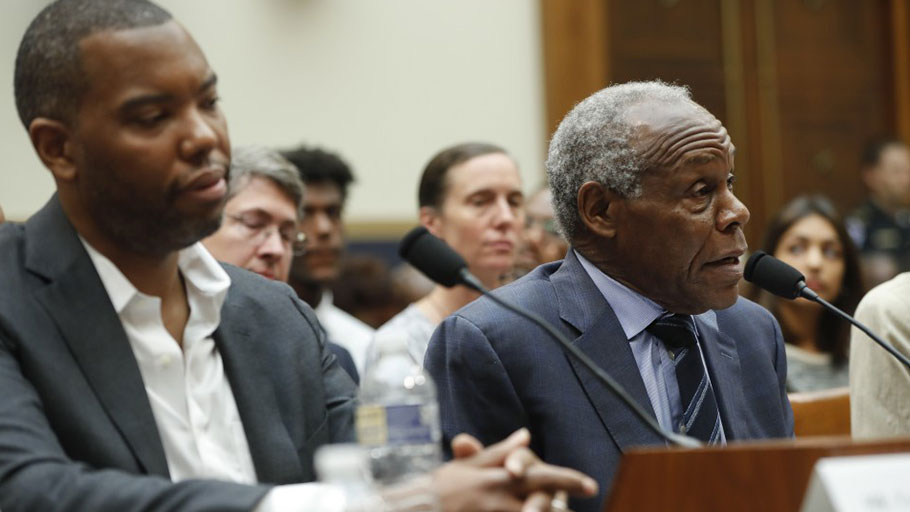 All Rev’d Up: The Future Of Reparations

You Are Here: Home » Blog » Reparations » All Rev’d Up: The Future Of Reparations

Actor Danny Glover, right, and author Ta-Nehisi Coates, left, testify about reparation for the descendants of slaves during a hearing before the House Judiciary Subcommittee on the Constitution, Civil Rights and Civil Liberties, at the Capitol in Washington, Wednesday, June 19, 2019. Photo Pablo Martinez Monsivais, AP

This year marks the 400th anniversary of the first enslaved Africans arriving in the United States. Reverend Irene Monroe and Reverend Emmett G. Price III joined Boston Public Radio on Monday to discuss what reparations will look like if HR-40 — the Commission to Study and Develop Reparation Proposals for African-Americans Act — or another reparations bill is passed.

“We’re looking at 250 years of slavery, 90 years of Jim Crow and 60 years of ‘separate and supposedly equal’,” Monroe said.

Reparations for slavery will go further than just providing compensatory payment to the descendants of African slaves, Price said.

“[Reparations] look like a mindset shift,” Price said. “It’s a mindset shift acknowledging that the nation is ill. In order to rectify the virus that we have, we have to go back and change how some of our institutions and policies have been not equal. It’s more than just money.”

Many people think that the Civil Rights Act of 1964, the Voting Rights Act of 1965, affirmative action and Barack Obama serving as president correct the wrongs done in the past, Monroe said.

“Many people see that as a rectification in terms of, ‘There’s your reparations.’ When we talk about reparations — and we’re talking somewhere between $12-15 trillion — it conjures up white fear,” she said.

Listen to Irene Monroe and Emmett Price on BPR by clicking here.

Monroe is a syndicated religion columnist and the Boston voice for Detour’s African American Heritage Trail and a Visiting Researcher in the Religion and Conflict Transformation Program at Boston University School of Theology. Price is Professor of Worship, Church & Culture and Founding Executive Director of the Institute for the Study of the Black Christian Experience at Gordon-Conwell Theological Seminary.

Together they host the All Rev’d Up podcast, produced by WGBH.