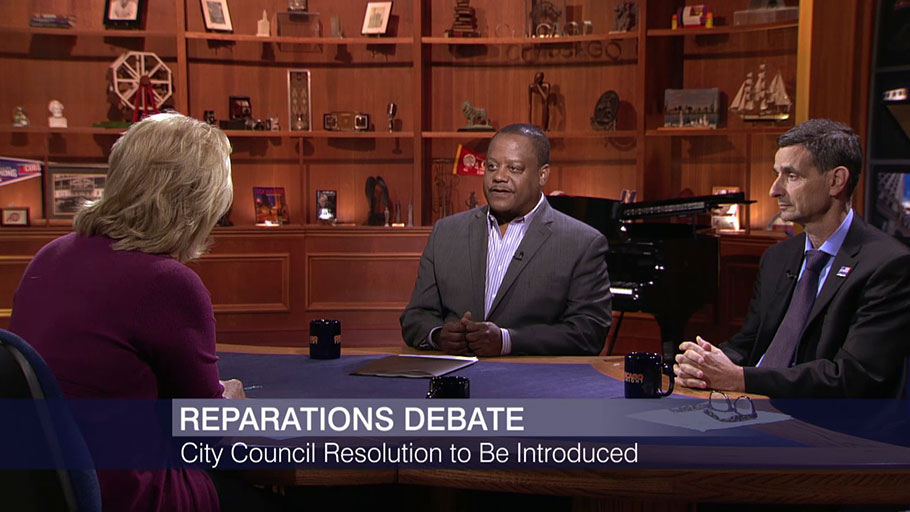 The Reparations Debate is Heading to Chicago’s City Council

You Are Here: Home » Blog » Reparations » The Reparations Debate is Heading to Chicago’s City Council

A new resolution on reparations is scheduled to be introduced in City Council this week. Alds. Roderick Sawyer (6th Ward) and Nick Sposato (38th Ward) weigh in on the topic. See video below.

A new resolution on reparations is scheduled to be introduced in Chicago’s City Council this week.

The Committee on Health and Human Relations would be tasked with crafting an ordinance to create the City of Chicago Citizens of African Descent Reparations Commission, according to the a draft of the resolution provided by the sponsor, Ald. Roderick Sawyer, 6th Ward.

This action follows the introduction of a bill in Congress this year. H.R. 40 would allow a commission to develop proposals on how to compensate the descendants of American slaves.

Reparations could take many forms, but the most straightforward would be cash from the government.

“We’re asking for the resolution to gauge the council’s temperature if they would really seriously be interested in establishing an ordinance calling for a commission on reparations in Chicago,” Sawyer said. “It’s a big ask because it’s going to accomplish a lot.”

But not everyone is convinced government reparations are the right response to decades of slavery and generations of inequality.

“Where are we going to get the money to pay for this?” asked Ald. Nick Sposato, 38th Ward. “It’s not necessarily a bad idea. I shouldn’t say I’m 100% against it. I’m against it if we have to take taxpayer dollars to pay for it.”

In Chicago, the City Council resolution calls for “restitution, compensation, satisfaction, and rehabilitation.” It would target “citizens of African descent in Chicago who are mired in poverty.”

But Sposato said that wording isn’t very clear. “Who’s eligible for a thing is the big question mark,” he said.

“What if you came from Africa and you’ve been here for 50 years? According to this [wording], it just sounds like you just you have to be black and live in Chicago,” he said. “‘Chicago citizens of African descent.’ So if you’re now a Chicago citizen and you moved to America 50 years ago and you’ve been in Chicago for five years, you would be eligible for this?”

Sawyer says that hearings will be held to work out details. “To be honest, I’m not the expert in reparations. I want to listen to the experts,” he said.

The proposed commission would hold public hearings and report annually to the City Council for 20 years.