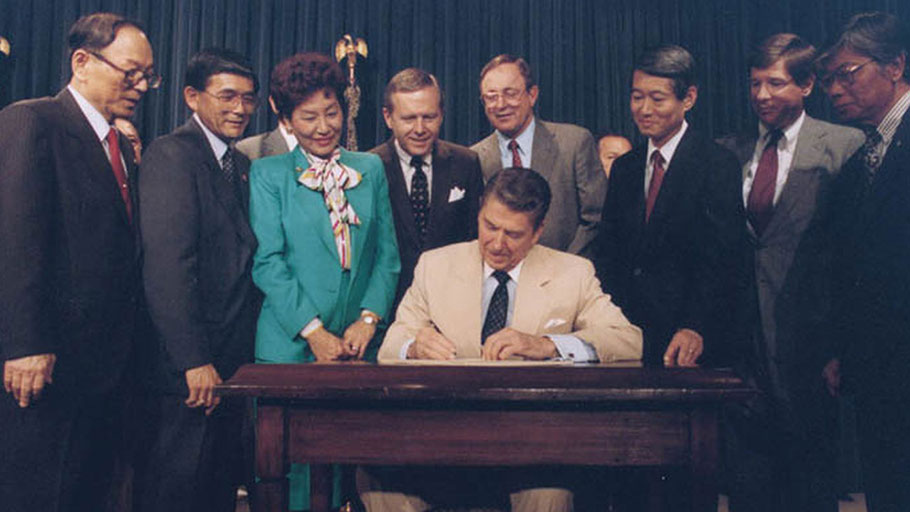 Another way to look at reparations

You Are Here: Home » Blog » Reparations » Another way to look at reparations

By Edna Whittier, The Roanoke Times —

In 1988, President Reagan signed the Civil Liberties Act to compensate Japanese Americans who were in internment camps during World War II. Offering a formal apology it paid $20,000 to each surviving victim and their heirs.

In 2004, the State of Virginia established the Brown v. Board of Education Scholarship fund setting aside $1 million (with another $1 million contributed by philanthropist John Kluge) for GED classes, community college, four-year degrees, and master’s programs available to any Virginia residents who were locked out of public schools between 1954 and 1964 when the schools closed to avoid desegregation.

In 2016, the Jesuit order of Georgetown University formally apologized to the descendants of 272 slaves sold in 1838 to pay the university’s debts. It now gives preferential admissions (considered as legacy admissions) to descendants of those 272 slaves.

The students of Georgetown pushed further for reparations in the form of a “Reconciliation Contribution” fund. Two-thirds of the students voted on the proposal and it passed nearly two to one. The fund would charge students $27.20 per semester and be directed by a board of students and slave descendants, to support projects in communities where some descendants of Georgetown’s slaves now live. As of April, 2019 the administration has not committed to the fund.

The reparations listed above occurred within the last thirty-one years. African slavery appeared in the North American colonies more than three hundred years ago. It is very hard to decide how to make reparations to cover that expanse of history. In a 2010 op-ed on reparations in The New York Times Lewis Gates, Jr. wrote that it is difficult to decide who should get such reparations and who should pay them, as slavery was legal under the laws of the colonies and the United States at the time of slavery.

Start with the G.I. Bill that allowed white male veterans to receive federal loans for mortgages, but denied them to African-American veterans. Although the bill didn’t mandate segregation it was written to limit federal oversight. The bill gave administrative responsibility to the states. Frequently, benefits were administered by an all-white Veterans Administration at the state and local level.

Although the government backed the loans the veterans had to find a local bank that would loan the money. Banks in the south often refused to lend money to African Americans. In the north many suburban neighborhoods prohibited African Americans from buying property. The denial of home ownership also denied the veterans middle class status and influence. This same discrimination occurred for Korean and Vietnam War veterans. Nothing began to change until the Fair Housing Act of 1968 was passed. Beginning with the year 1946 reparations should be considered for war veterans of color (and their heirs) unable to get mortgage loans or buy houses due to now illegal housing practices.

I also propose reparations in the form of free college tutoring to low-income people of color and help on tuition debt. Gaining admission to most colleges post World War II was very hard for all veterans of color. Accumulation of generations not growing up in academic environments repeats a cycle of low-income earning power.

The question of reparations is overwhelming and needs to be dealt with piece by piece, most recent ones first. Ruth Bader Ginsburg’s strategy is an example to follow. She faced an overwhelming number of federal gender-based laws in her career, but instead of asking the Supreme Court to end gender discrimination all at once she took on each case one-by-one and built on each victory.

If the federal government can’t move on individual cases, then state governments should, just as Virginia did. Colleges should move just as Georgetown University did. If colleges won’t, then students need to take the lead as the Georgetown students did. And if none of this is occurring holders of the top 1% of U. S. wealth, like Robert F. Smith, should take the lead.

It has to start someplace and if governments won’t do it, then a groundswell must happen.

Edna Whittier Whittier is a member of Spectrum, an interracial women’s group in Roanoke. She lives in Floyd.

This article was originally published by The Roanoke Times.